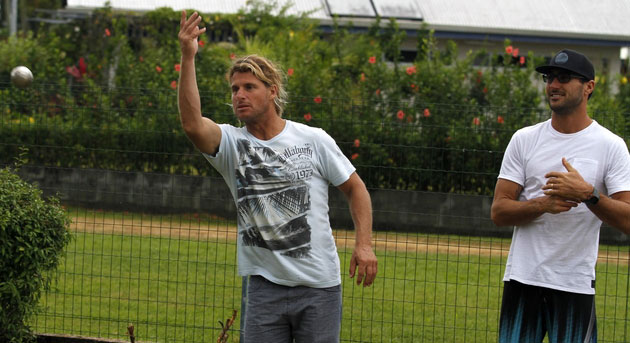 The question, here, is a simple one: Should Mark Occhilupo be slotted into the roster for Bells based on the fact that he is a much-loved surfing institution and a few surf technologists know how to use hash tags? I’m leaning towards “no.” Photo: ASP

When painted with the right brush, Mark Occhilupo’s story is inspiring. A hardscrabble kid surfs his way to the top, is derailed by drugs and issues with manic depression, and then overcomes his demons with the help of people who both care for him and depend on his image to turn a profit.  They keep the drama out of the media spotlight until years later when a few oblique references are made in a book published during his triumphant return to form.  Everyone wins – on both a personal and corporate level.

In a better world, it might have been how the life of Andy Irons panned out, as well. In this instance, Irons is not the issue, but rather, Irons is always the underlying issue in these strange days of market-driven surf culture. The pertinent question here is one motivated by a Twitter campaign imploring the authorities to #putoccyinbells2012.  The question, here, is a simple one:  Should Mark Occhilupo be slotted into the roster for Bells based on the fact that he is a much-loved surfing institution and a few surf technologists know how to use hash tags?  I’m leaning towards “no.”

You might remember that Billabong employed this same rationale in their tow-in expression session for Bruce Irons at last year’s Billabong Pro Teahupoo.  Like the “campaign” to #putbruceinchopes, the “campaign” to  #putoccyinbells2012 is a web-based initiative, and like most web-based initiatives, it will probably quickly devolve into Instagram tweets about our pets’ quirks. (OMG!, Sparky never eats lettuce! #crazydogs)  However, if the right people start talking about it in the surf world (@kellyslater), it could gain some traction.

The surf world has historically operated via a hoary system of quasi-familial ties that essentially protects and serves those in its higher echelons.  A made man like Occy has more than once benefited from the system, albeit in ways that I think most would agree, are positive.  Whether surfing was once more of a family than a famiglia, I can’t say, but every time there is a call to put someone into a contest for sentimental reasons, I shudder a bit: your sentiment funds their surf trips.

I respect, and to some degree, share the desires of those who want to see Occhilupo in a jersey again; he is still a fantastic surfer, and I’m a sucker for nostalgia like the next guy.  But granting a man a wildcard simply because he is beloved is a sham.  Worse, it feels like a marketing ploy for companies who are dying to reconnect with apathetic consumers.  Mark Occhilupo is a man of flesh and bone, but Occy is a brand, a subsidiary of Billabong. They sell you Occy and his compelling story, then they sell you the book, then they sell you the t-shirt.  If he dies suddenly, God forbid, then it’s easy to change his brand name a bit and keep selling it until the actual man and anything he might have stood for dissolve into the golden tinge of an aggressive PR campaign. This is cultural capitalism 101, and I ain’t got the money nor the time.

Another question is the perennial legitimacy crisis of the ASP.  Tossing a surfer into the draw because it would be “cool” undermines any sense of real professionalism that the Tour has worked to cultivate.   Trying to sex up a comp with a Twitter wildcard ultimately misses the point.  Competition surfing is, by definition, a limited forum made to showcase the struggle of two or three dedicated surfers who want to pit their skills against one another in a structured format. If that isn’t your cup of tea, or you are somehow opposed to it, the best criticism you can structure is to simply not pay attention; there is a healthy free surfing market to follow through its online, magazine, and video presence.  If you enjoy competition surfing, which I do some days, then you have to respect the rules of the game – even if it means excluding your favorite. Put simply, sentimentality and competition don’t mix; the sooner we accept that fact, the sooner pro surfing becomes just that: professional. 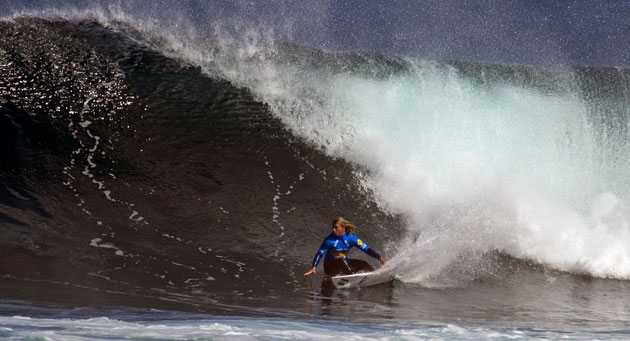 Who wouldn't like to see John John or Medina vs. Occy next week at 8-foot Bells? Photo: ASP

(The following is a response by Kelly Slater to an article published last week entitled #PutOccyInBells2012: #WTF? By Tetsuhiko Endo)

If so, that’s a complete denial of the facts. He’s probably the best ever goofy at Bells; just a few years ago he beat AI in 8-foot surf there when people thought he couldn’t; he just came off a 3rd place finish at Margaret’s when people thought he couldn’t; the forecast is calling for big surf and offshore winds (his bread and butter), and on top of that, yes, nostalgia is a good thing when placed correctly.

Should he be in the event strictly because of the power of Social Media power and the institution and branding of a company? Absolutely not. Should he be in based on his abilities and the fact that he’s a more interesting draw all-around for the event? Absolutely. Who wouldn’t like to see a John John or Medina vs. Occy heat next week at 8-foot Bells? Who thinks Occy doesn’t have a chance to win that or that he’s not the likely favorite in those heats (with the right conditions)?

The potential of Twitter and the like is that anyone has a voice. #PutOccyInBells2012 or any other hash tag can be a good way for everyone to be involved. I have no idea where it came from but I thought it was a good one so I went with it. That’s part of the fun with these things. Some just take hold and become real.

Tetsuhiko, if you have a problem with the power of Social Media and corporate institutions, fair enough. Everyone should be concerned. But to use Occy as your scapegoat in this article to make an unrelated point is off the mark.