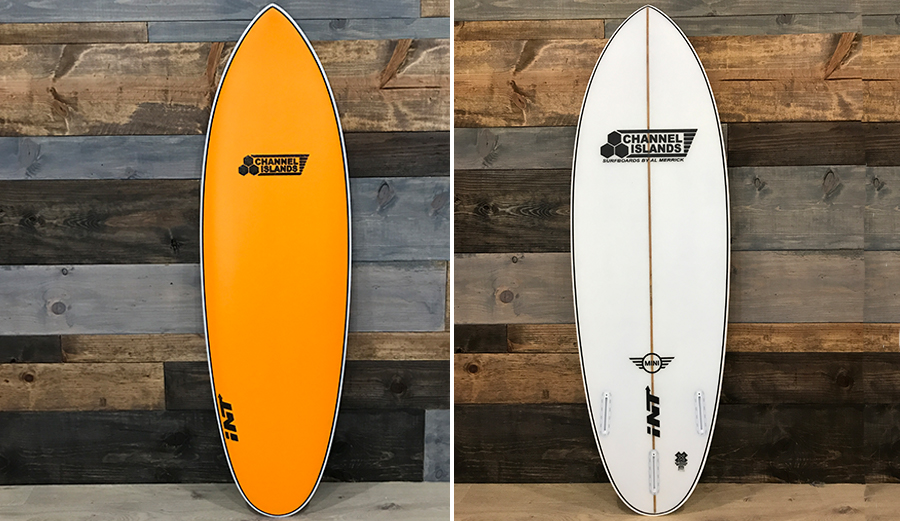 Business on the bottom, party on the top. CI and INT have taken the foamie to the next level. Photo: INT

I’m not much of a sports car type. Automotive enthusiasts might attribute that to me never having actually gotten behind the wheel of a Corvette, much less a Ferrari. Still, it’s when a nice car squeals past me on the road only to end up next to me at the next red light – me in my oh, so not sleek, not aerodynamic Honda Element – that is just so satisfying.

Cars to surfboards make for an imperfect comparison. Namely, because a craft built for high octane, raw, performance surfing will perform about as well as a soggy door in shit conditions. Still, in the world of surf craft there are BMWs and then there are Saturns. Thoughtful deliberate craftsmanship with an elevated attention to detail, and cheaply produced sleds manufactured in large quantities overseas.

Foam surfboards, generally, are not built with performance in mind. If anything, their recent surge in popularity is due at least in part to an ironic rejection of high pressure, high fidelity surfing. So when I first heard about what INT, a foam surfboard company based in Carlsbad, was doing with “hard bottom foamies,” I was perplexed.

Essentially, “hard bottom” or hybrid foamies resemble your average fiberglass shortboard or mid-length on the bottom (complete with Futures fin boxes), with a foam deck and rails. Business on the bottom, party on the top, if you will.

That ups the performance game of these sleds immensely at the expense of whatever ironic statement one might be trying to make.

“We’re not saying this is a perfect replacement for your standard surfboard,” David Leon of INT told me. “It’s about 80-percent there. We’re out to change people’s perception around what a foamie is, and what it can do.”

But 80-percent is better than, say, 40-percent. And it’s not hard to imagine practical applications for a board that’s more durable and somewhat less dangerous if it becomes a projectile during a cleanup set. For one, KB Brown of Strongwater Surf in Missoula, Montana, told me in a recent conversation that for folks in the mountains accustomed to tossing kayaks or mountain bikes in their truck bed, getting accustomed to the fragility of a surfboard for river surfing is a serious learning curve. The durability of a foam board with a bit more performance, then, would be the best of both worlds for our inland friends.

David also revealed to me that this technology, which has so far been rolled out in collaboration with Channel Islands, could essentially be applied to any type of surfboard. INT’s sister company KKL, that’s headquartered in the same facility, has been CNC milling blanks for the best in the biz for decades. In other words, the sky’s the limit here as far as the different models that can be made into hybrid foamies.

Take a traditional longboard for instance. For folks who want to get some experience surfing without a leash before shelling out a grand plus on a beautiful log only to have it wash up on the rocks or, God forbid, hit someone, the hybrid tech seems to be a nice alternative. And it’s something currently being developed.

The seasons have changed, the waves have gotten softer and so can your board! #cimini #ciwaterhog now available as INT soft tops available in both EPS and soft bottom. Keep the stoke alive into the summer with the beater board of the century!!#cisurfboards_sbstore #cisurfboards

INT was kind enough to allow us to test out their CI Mini and CI Waterhog models, which were an absolute blast. Like David said, they’re about 80 percent what you’d expect out of a normal board – the best maneuverability I’ve ever gotten out of a foamie, and speed and flex felt comparable to a standard board. What’s more, when the CI Mini we tried (which didn’t have a leash plug, though all production boards do come with one) went hurtling toward a group of tourists after I dug my rail, I found myself less concerned than normal. Nobody was harmed in the research for this gear review. Bottom line, as a summer board these things seem to make perfect sense.

It’s worth mentioning (and this likely goes for all foamies) that the foam deck rashes up your stomach quite a bit more than your standard board. I’d recommend a suit or wetsuit jacket if you plan to trunk it.

And finally, cost. At face value the $499 for the Mini and $519 for the Waterhog you’d spend on a foamie, especially compared to Costco’s prices (not to name names) might be difficult to stomach. But considering these are closer to a standard surfboard that retails off the rack for $650+, the price is understandable. Not to mention INT is the only company building foam boards start to finish in the USA with domestic materials, and Sustainable Surf has certified these hybrids as ECOBOARDs – their Marko Foam core is 100% recyclable, and materials include Epoxy Bio resins and bamboo stringers.

INT’s recent collaboration with Channel Islands is just scratching the surface of what’s possible with hybrid foamie technology, and finally giving traditional shapers access to “soft board construction,” they may not have otherwise had access to, or at least wouldn’t have been confident putting their name on. Expect to see more INT collab models hitting your local surf shop very soon.