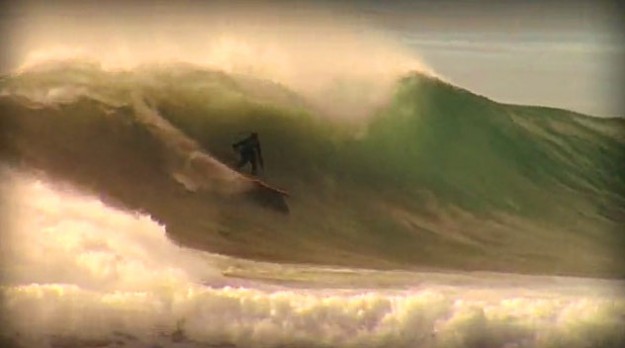 "To be king you don't need a castle." Stoked and Broke proves surfers can have both without the coin. Exhibit A.

I’ve seen about fifty surf films in the last eleven months. I don’t mean Internet video clips – of which I’ve seen hundreds. I mean fifty dude-bro, shredding the gnar hunks of steaming surf cinema. The road has been long and insanely boring. That said, I know, dear reader, what you are thinking:  “I would love to get paid to watch surf films. This whiny little punk doesn’t understand the pain of having a real job like (insert your boring, pointless mid-life-crisis incubating job here).”

You’re right. But that doesn’t change the fact that most surf movies are grievously corny advertorials whose sole purpose is to sell soft goods to fifteen-year-old boys. This may not be readily apparent to the casual viewer, but, if you, for whatever sadomasochistic reason, decide to watch numerous surf films in a short period of time, Clockwork Orange-style, you will begin to see certain patterns emerge.

First, each film is a wonderland of branding that reflects the vested interests of whichever company (or companies) funded the project. Second, interviews inevitably include the words: “dream,” “soul,” “stoked,” and for some reason “super” – as in: “I’m super stoked to be living my dream right now on the Quiksilver boat.”  After all, negativity doesn’t sell board shorts, dude.

Male surfers are portrayed as overgrown adolescents who spend their free time engaged in “hilarious” antics while (although not directly stated) under the influence of alcohol and uppers. Females appear either as bikini girls in voyeur shots, or plucky pros who go out of their way to convince viewers that they are super great spokesgirls for whatever brand you want to promote using their breasts and butts as billboards.

Recognize this world?  It’s the wet dream of every coastal adolescent boy in America and Australia: the waves are always good, the women sexy but un-threatening, the clothes are fly, the antics low brow, and the sun is always out. The ambient hum you hear is the distant roar of money gushing into the bank accounts of large surf companies.

For proof, look no further than Reef’s Cancer to Capricorn: The Path of the Modern Gypsy. You can download it free at the moment on Surfline, so have at it. As you watch, you will undoubtedly notice two things:

1. Gypsies  – a small, nomadic group originally hailing from the Indian subcontinent who now reside in European ghettos where they are almost uniformly despised by unwilling host countries for their unique culture and reticence to obey national laws – are really quite similar to modern pro surfers who take all expense paid boat trips to tropical countries in order to gather film clips and make money from large, internationally traded corporations.

2. This connection will make you want to buy a pair of sandals with a (beer) bottle opener in the sole.

This is fun every so often, especially if a film manages to throw together some very talented surfers. For instance, I enjoyed the Modern Collective, so long as I muted the Ibiza club anthems and skipped the parts that involved skinny jeans and fedoras. I also enjoyed Castles in the Sky so long as I skipped the parts where pro surfers read canned quotes from a note card off camera. One of the best documentaries I watched all year, surf-related or no, was Sea Of Darkness, by the B-movie director and only occasional surfer Michael Oblowitz. His previous feature was something about lesbian vampires, so go figure.

Nearly all of the other films that I’ve watched this year blend into one marathon advertorial that plays on a loop every time I try to recall such and such surf film.

In September, Cyrus Sutton sent me a copy of his latest film: Stoked and Broke. (Full disclosure: I had known the kid for about half a year through correspondence and had written a story about him for the British magazine, Huck.)  I don’t know him well enough to say that I like or dislike him, but after watching the film, I have no problem saying that it is the most surprising, spot on, eloquent, and entertaining meditation on surf culture that you will see on a screen this year.

The story revolves around Sutton and his sidekick Ryan Burch’s journey from Encinitas to San Diego, on foot, spending zero dollars. Although it’s dressed up as a happy go lucky instructional video, it’s actually a surprisingly cutting critique of consumer culture.

The American literary critic Robert Scholes once said of Kurt Vonnegut that he put bitter coatings on sugar pills. Vonnegut wrote during a time when the advent of the nuclear age cast the pail of mutually assured destruction over the entire world. Fear, anger, and gloom were de rigeur in mass media. Today, the media is a different creature – preferring to turn a blind eye to global problems in favor of partisanship and celebrity gossip. Today, Sutton has emerged as the surf world’s Vonnegut – a guy who puts sugary coatings on bitter pills.

But he doesn’t harp, and unlike, ahem, some of us, he never sinks into bitterness. What starts out with seemingly innocent intentions, becomes an odyssey through the heart of surfing’s Valley of the Dolls. Sutton’s Southern California is a place of beauty and corruption. Orange sunsets cast long shadows of the homeless onto the boardwalks. Dog treats cost more than human food, and happy surf bums have hit middle age and realized that life isn’t as simple as they once believed. Police figure prominently into the story as well. They are the natural antagonists of our free-spirited surfers: the enforcers of the suburban ideal that surrounds our heroes, but remains inaccessible to them.

As they travel the coast, we discover a place that is both graceful, yet irredeemably tainted. Along the way we meet characters who are struggling to fit into the all-American dreamscape. Through their interviews, we are given a bittersweet insight into what being a surfer really means in Southern California today. Spoiler: It’s not all boat trips, girls in thongs, raucous parties, and spitting tubes.

The waves are fair to middling, with one balls-to-the-wall day at Blacks (which ranks among my favorite sections of the year). Sutton and Burch ride their usual grab bag of goodies, from hand planes to singe fins to the no-quarter-given-or-expected Lord Board. Each session sticks far longer than any Indonesian tube fest because each has a long-lost sense of spontaneity. Sutton is a good surfer, and Burch is an uncommonly good one, and here they are making the best of average conditions. The meticulous editing in most films that makes every session seem epic and every ride the ride of your life anesthetizes with its unattainable perfection. In Stoked and Broke, they paddle out, ride, fall, and catch the occasional great wave. As an audience, we can’t help but cheer, because, somewhere deep in minds addled by years of watching surf porn, we know surfing mostly isn’t perfection, it’s moments of perfection within an otherwise irrational game of cat and mouse.

In the end, that message is the most impressive part of the movie:  In an age where the Stock Market and PR companies make the rules, Sutton has dared to create something honest. Inevitably, some parts of the movie are staged, but the end result captures the essence of these strange days of the surfer in Southern California.