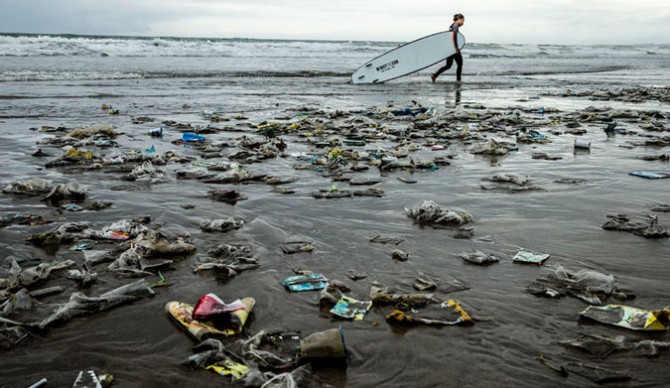 Production and dependence on plastic has surged at an astonishing rate in the past 50 years. In 1964 15 million tons of plastic were produced for packaging worldwide. By 2014 that number had ballooned to 311 tons in a year, which should double again in just another 20 years. The positives, in an economic sense, are massive. Plastic packaging preserves our food, cutting down on wasted produce or meats, extending shelf lives, and makes transportation of goods much more efficient. But the price tag of convenience is quickly approaching a tipping point for our planet, as almost 100% of the packaging material people use today only serves us once before becoming waste itself. And in the literal price tag sense that equates to as much as $120 billion of plastics annually.

The staggering numbers come as the result of The New Plastics Economy: Rethinking the Future of Plastics, a report outlining our need to look at the world’s “after-use plastics economy.” Recycling, while a somewhat normal practice for many, is not only highly inefficient but it turns out only 14% of plastic packaging is actually collected for recycling while just 5% is retained for a second use after the arduous steps of sorting and reprocessing. So our single-use plastics, especially when it comes to packaging, is a massive problem that won’t be solved by simply making an effort to separate your coke bottles from the rest of the trash at home. The report is calling for a global shift by putting the responsibility on the world’s leading businesses, academic minds and innovators who can create large-scale “moon shot” innovations. The “or else” alternative, they suggest, is that at this rate the ocean will hold more plastic than fish by the year 2050. Right now 8 million tons of plastic leak into the ocean each year, which is the equivalent of one garbage truck filled with plastic being dumped into the ocean every minute. Without significant action that number will increase to four per minute.

“The best research currently available estimates that there are over 150 million tons of plastics in the ocean today,” the study says. “In a business-as-usual scenario, the ocean is expected to contain 1 ton of plastic for every 3 tons of fish by 2025, and by 2050, more plastics than fish (by weight).”

The solutions outlined in The New Plastics Economy are largely based on the principles of a circular economy. An asserted effort to reuse more plastics would be sparked by businesses being incentivized to do so, cutting down the need to produce new plastics as well as narrowing leakage. The cost could be offset, they argue, by increasing reuse in business to business plastics – meaning the extra resources needed to step up reuse efforts would be gained back by substantial cost savings in packaging.

So where does this New Plastics Economy all begin? It turns out the U.S., Europe and Asia combine to account for 85% of the world’s plastics production, so these would probably be a good start. Meanwhile, the report outlines that more than 80% of the total leakage of plastics into the ocean. From the sheer amount of plastic falling into our oceans to just how much of it comes from a handful of places, the numbers are all astonishing. And while The New Plastics Economy doesn’t focus on one groundbreaking innovation or technology to change it all, it’s an interesting conversation to begin before we end up with more plastics in the ocean than fish.