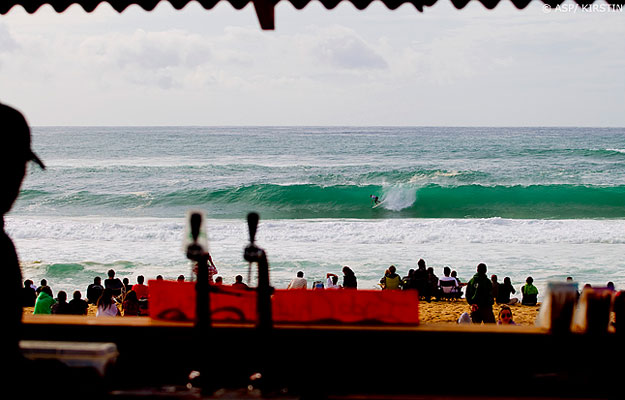 The abstract is this: Surfers will go to amazing ends to stick up for an in-crowd. It holds the sport back. Photo: ASP/Kirstin

It’s not often you uncover worrying psychological trends in the surf community just by hitting a quick rant in to your Facebook status. But that’s what I think has happened in a mammoth thread that has taken over my personal page lately – and here’s how:

Firstly, simply to keep this study hypothetical, whereas my Fb thread obviously has names and personal relationships to take in to consideration, this account of the issue that arose does not. It’s not me being spineless; it’s simply to keep the debate in the right place. The abstract is this: Surfers will go to amazing ends to stick up for an in-crowd. It holds the sport back.

But then some of us want the sport held back. Don’t we?

Low tide, shifting barrels, somewhere along the second leg of this year’s stunningly progressive ASP World Tour. Ratings points are really starting to matter. Newcomers are shaking the established clan of journeymen pros to the core. A surfer has won earlier in the round (let’s call that “heat y”), shifting pressure to a key rival who must now escape a tricky draw in frontlit half-closeouts (this will be “heat x”).

Heat y was mid afternoon, an easy win, little challenge for the spotlighted surfer who progressed easily. The whole half-hour was filled with informed debate from two very senior webcasters discussing strategies, tactics, the title race, the fight to avoid the cutoff and contemporary issues in the sport, along with a few personal anecdotes from their own dealings with the surfers in the lineup. It was easy viewing. Hours later, heat x was close for the first half, before the favourite responded to pressure with some huge scores. A challenge met. Lots of waves were ridden. It was a thriller. The sport was in rude health, but for one thing: Heat x seemed to proceed unnoticed by two very different web-announcers, who mentioned the surfing in passing, amid talk about friends of theirs that few of the viewers would have known, their own plans to go drinking later that evening and general banter that bore no relevance to the high-stakes, career-making heat that was unfolding. It began to frustrate me. I asked someone else watching the webcast with me if this was really going on. It was. I ranted on Fb, naming the announcers, suggesting industry friendships was the only reason they’d been appointed, decrying their approach to commentating on this key heat, and moved on. Or so I thought.

Within hours a thread from hell had emerged on my Fb page, in which surfers were lining up to defend these web-announcers using two main arguments: Firstly, talking in a lull must be hard, give them a break. Secondly: Who was I to criticism people who surfed so many millions of levels out of my league. These guys shred, went the defense, so they must be good at webcasting. A cyber-queue formed to enlighten me with new and varied ways to ogle these heroes’ competitive achievements. Some of the comments epitomized that gorgeous, off-the-cuff, semi-lucid internet banter that we all love, but some of it seemed to be trying to boil over.

The first of these defenses is easy, I think, to deal with. Webcast anchors rotate in shifts to avoid fatigue and boredom, and are being paid to talk about the sport. Here in the UK cricket sees very slow passages of play, and yet the BBC’s Test Match Special has a cult following – with its commentators widely recognized as some of the greatest raconteurs in the land. When action is sparse, BBC cricket commentary is the platonic ideal of what surf webcasting could be, and indeed sometimes is. Guests come in and out, debate is fierce, humor wicked and economically used to maximum effect, and the expertise of the team is frightening. Which, in fact, kind of links to what is at the heart of the second defense surfers bombarded me with. Mainstream sports commentators are not strictly the most accomplished practitioners of the sport (both in Europe and overseas) – some don’t even have any career to speak of, and yet they’re in the booth because producers who think about viewing figures have decided they’re the best people for the job. Of course, it’s essential to have veterans who’ve been there themselves on the comms team, but ability in the sport often comes second to willingness to say what you think, to hear debate and therein reach out to as wide an audience as possible.

It’s not good enough, as the half-yearly cutoffs move surfing forward to new heights, to say people who rip can talk about whatever they want, paying no regard to an audience of consumers and potential newcomers to the sport. (I know, some don’t want the newcomers to get any help – that’s a different debate.)

But this is exactly what people did say, in their droves, and it is this outdated view that led to my unearthing of an amazing trend in the surf community I hold so dear. Jamie O’Brien has a following of people who refuse to follow – the corporate message beneath, despite his being sponsored to the nines, is subtle, it’s not obvious, and people love him for it. He rocks the status quo. But he can surf – like someone from out of this planet. Bobby Martinez rants live during an event in which many others are surfing way better than him, he repeatedly names a sponsor that he’s got shares in, a few admire it, most forget it. Almost all of the friends who took me to task for my comment had either met one or more of the announcers I’d criticized, knew them well, or had received promo gear from one or more of the event sponsors throughout their lives. My villainy needed to be quashed, quick and hard.

In the lineup, in the street, on the end of the phone, friends were eager to praise the thread and the heated debate. One respectfully said he likes announcers who don’t focus on the action – a difference of opinion over content, which I was more than happy to take on board. But online it remained me against a queue of excellent surfers all proposing the simple case that these announcers rip harder than me, so I had no right to say what I’d said. Content didn’t come in to it – it seemed they couldn’t get past the insolence of someone breaking rank to criticize the elite. In cyberspace people weren’t commenting in my defense because they were afraid – and offline were telling me so with no shame. “Gotta be careful what you post online,” they’d say, “Plus, don’t want to rub those guys up the wrong way.”

Eventually one surfer with a solid competitive record, who I hadn’t spoken to, went over the top and agreed with me online. “I’ve been wondering whether to post for days, but in the end thought, ‘this is ridiculous, who cares if I piss people off.’ I saw that heat too and had to mute the commentary out of embarrassment.” The argument raged on, status-quo fighting to defend itself against the insolence of someone who’d criticized two top surfers in semi-public (I’m not Fb friends with either of the guys I slated, by the way – but would like to think it wouldn’t matter. Criticism is essential to help us do things well, isn’t it?)

And then another friend with a psychology background showed me this: “Groupthink,” developed as a theory by Simon Asch and others, is defined as ‘a mode of thinking that people engage in when they are deeply involved in a cohesive in-group, when the members’ strivings for unanimity override their motivation to realistically appraise alternative courses of action’.

I think surfing needs to be the basis of a study in to this worrying phenomenon.

I work as a teacher, public speaker and a writer. I repeatedly throw myself to the lions’ den of literary agents, promoters, producers, editors and publishers. If people don’t critique each other progression will never happen. If criticism is taken personally it won’t foster change. I socialize with people who’ve rejected me, and am good friends with people whose work and ideas I’ve slated. It’s never personal, but it has to be direct and honest. Social constructivism in action. In science, art, politics, everywhere for that matter, this is how meaning is made. People don’t go to conferences to just agree and find unanimity.

Professional sports needs this just as much. It seems surfing, struggling still to have a free press that takes its big names to task, is miles behind in this facet. Without that, things get better slower. Webcasts are still too often a love-in where everyone knows each other, praising and plugging mates in the industry. As the action streamlines and errors or weaknesses are ruthlessly eradicated from the performances in the water, announcers failing to engage or to cater for those viewers who weren’t with them in the bar last night, on the golf-course that morning or on the boat-trip last month could result in a massive missed opportunity.

So will surfing ever be free of groupthink?

The ASP could take a big step by setting up a single web-production team for all events, free of sponsor ties, and willing to both use and ignore their personal contacts when appropriate. This should produce entertaining, sharp and informed webcasting. It doesn’t mean the sponsors need to be frozen out, but some sort of quality assurance is going to be needed if the sport is to embrace this exciting new era. I hope the days when a surfer is riding a career-defining wave in front of our eyes, while announcers talk on as if it isn’t happening, are numbered.

I welcome challenges to my views on this…