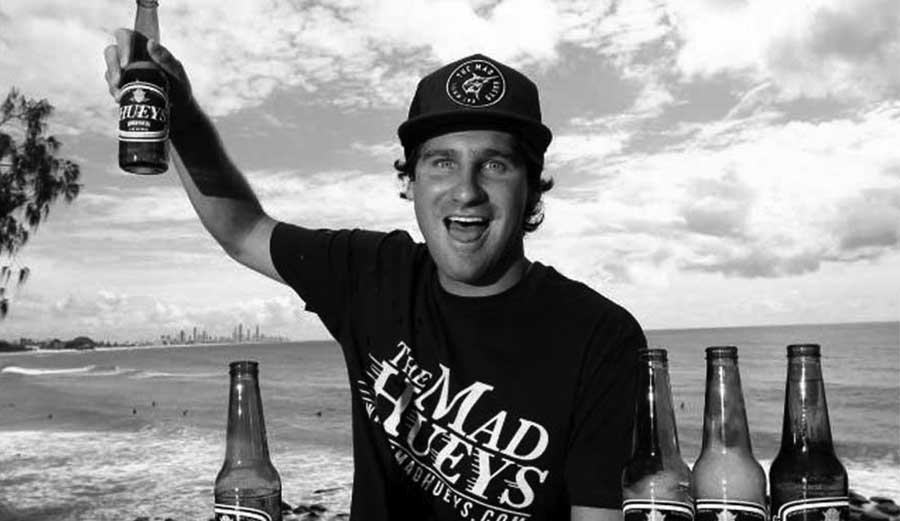 Shaun Harrington of The Mad Hueys has also created their own beer. Photo: Kit Wise

What’s the true hallmark of success for a professional surfer? A beach resort in front of a heavy right point? A private jet escort to Fiji? Or, maybe, a beautiful wife to come home to every night? For the Mad Hueys co-owners Shaun and Dean Harrington, Balter Brewing co-owners Mick Fanning, Joel Parkinson, Bede Durbidge and Josh Kerr, or the numerous surfers (as well as skate and snow athletes) that invested in Saint Archer Brewing out of San Diego, the answer might be simple: Beer.

Surfers, like most people, are always balancing a few hobbies. But usually they’re more straightforward than a brewery – John John enjoys photography, Kelly’s a golfer. And then there are the enterprising pro surfers, the handful that go on to start brands that are in some way still relevant to the surf world – think Kelly and Outerknown, or Dion, Mitch Coleborn and Kai Neville’s sunglass brand Epokhe.

But recently, groups of professional surfers have launched into the entrepreneurial pool of craft beer – opening their own breweries. It’s a business that seems so far out of left field. Except for the fact that surfing is just a single element that defines a pro surfer, beyond that they likely have a range of interests, and in this case beer is one worth investing in.

Founded in 2013, Saint Archer Brewing may be the first that gathered the best of the best in action sports culture and the brewery scene in an effort to create California’s best beer. It also just so happens that Josh Kerr was an investor and has now plugged into Balter Brewing. What went from a micro brewery in San Diego quickly turned into a lifestyle and brand, thanks to co-owners Josh Landan (an action sports filmmaker by trade) and skateboarder Mikey Taylor. Saint Archer is now influencing more people to follow in their footsteps, like Balter Brewing (which opened in April) and most recently the Mad Hueys (who just released their Captains Lager).

And even though beer unites them, each crew couldn’t be more different. The Hueys come from wild fishing extravaganzas and insane free surfing jaunts, while the boys at Balter come from the competitive World Surf League. It goes to show that like surfing, beer also tends to attract people of all types.

Scoring majestic waves whenever possible while operating a craft beer paradise seems like a lifestyle I could get used to. I don’t mind watching these two groups turn their attention to barrels of beer. But what’s the point? The Harrington brothers have respectable surf careers similar to Balter Brewery owners Josh Kerr, Bede Durbidge, Joel Parkinson and Mick Fanning. They surely aren’t hurting for cash. My guess is that when it comes down to it, surfing isn’t their final destination, its just a piece of the puzzle.

Just like any early morning swell chaser, the creative juices will always being flowing in our extravagant lives. After we score our first barrel, we’re always dreaming for bigger, and after a trip to Puerto Rico, we’re already asking ‘where to next?’ It’s in our blood, just like the idea of a brewery for Saint Archer, the Mad Hueys or Balter. They aren’t trading one lifestyle for another, they’re putting them together and setting the bar high for the action sports world. Surfing’s never been just about surfing, it’s about the lifestyle associated with it. Craft beer and entrepreneurship echo that ethos – one of creativity, experimentation, and most importantly the fun of getting to split a few with your buds.