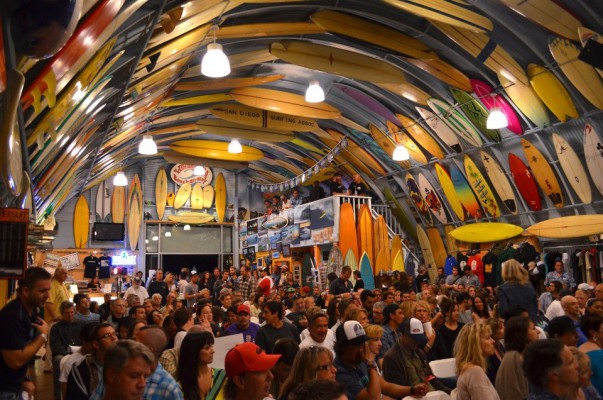 San Diego is synonymous with surfing. It may not be the birthplace of the sport of kings, but it sure has served as the training grounds for plenty of kings of the sport. With roughly 75 miles of coastline, there are myriad surf breaks, surf towns, and legends to recount. From Trestles to Imperial Beach, surfing is a mainstay of life, and we would be remiss not to document its influence.

Enter the San Diego Surf Film Festival (SDSFF)—a relatively new event that enables San Diego surf photographers and filmmakers to enter their work for public enjoyment and the chance to win accolades. After the inaugural event in 2012, Pierce Kavanagh and fellow founders are bringing back the successful festival. It runs from May 8 to 12 at Bird’s Surf Shed in Bay Park, just east of Pacific Beach. I spoke with Kavanagh about the SDSFF and some of the personal and professional challenges that make this affair a local spectacle.

“Every year, we want to bring the best surf cinema experience to everyone who walks through the doors of Bird’s Surf Shed,” says Kavanagh. “And following last year’s overwhelming success, we will continue to do just that.” It certainly helps to have a sense of humor as he and his gang assemble a marathon week of surf festivities. The crew includes Kavanagh’s wife Petra, Geoffrey Smart, Andrea Siedsma, Gage Hingeley, and Matt Beard.

In putting on such an ambitious event, the most important thing is to give yourself enough time, says Kavanagh. Scrambling to put everything together last minute (remember preparing for final exams in college?) is a prescription for chaos. “I honestly started working on the 2013 SDSFF the weekend after 2012 was over,” he says. “It will inevitably grow every year, and we just have to be prepared for that. We will present 35 international and local films, a live art show for filmmakers and VIPs, a dozen amazing bands, and three raging after-parties. There will also be beach cleanups, wave-riding expression sessions and shaping demos. The SDSFF Awards Ceremony will wrap things up.”

With the basics nailed down, the staff also has a group of volunteers whose presence, when the waves are up, isn’t exactly expected on the premises. “I foresee half of our volunteers not showing up if there is a six-foot south swell,” he says. “But I am totally cool with that.”

As for the films themselves, the selection process is up to a seasoned group of surfing ambassadors whose task is no walk in the park. “There are only 12 slots for feature films and 23 for shorts, so the bar is pretty high,” says Kavanagh. Their aim is to pick “the finest in narrative-driven, independent surf cinema from filmmakers around the globe. By putting emerging filmmakers and established pros on a level playing field, it really keeps things interesting. Nobody gets a hall pass.” As for the judging criteria, what appeals to one judge may appear inadequate to another, and as a result, any given film may be passed over. It can be tough to dissect why the panel chooses one film over another.

As for what catches Kavanagh’s eye, he says, “Photos and films of home breaks are what speak to me the loudest. Seeing the lone palm in the background, the grinding womp, or familiar houses on the beach with the realization that this is my home is what really does it for me. It instantly connects me with the surrounding neighborhood and floods me with millions of memories. For this reason,” he says, “I am a big fan of Chris Burkard’s pulled-back photography in the sense that he composes and draws you into the entire environment. He tells you a much deeper story than just the image itself. Remember, it’s not always just about the waves.”

Kavanagh says the best stories he’s seen told through film are Dogtown and Z-Boys and Riding Giants, by Stacy Peralta. What really turned him on was the “combination of historical footage, insane cinematography, interviews, pace, narration, and soundtrack. But that was then. Now I can really appreciate the financially challenged young filmmakers that are coming up and producing stunning work. The gentlemen over at the Granite Stoke for example, if you ever wanted to know what surfing freezing New England is like, will make you feel it to the core with Salmon Theory. No massive budget. Just authentic filmmaking.”

That said, the future of surf filmmaking excites Kavanagh. And rightfully so. With the advent of the GoPro cameras and the ease with which the everyman can create surf clips, surfing has seen a boom in documented sessions. “My favorite part about putting on the SDSFF,” says Kavanagh, “is receiving films from individuals all over the world telling the story about their local surf scene. You don’t need a helicopter and millions in equipment; you just need a solid story.”

This bodes well for the future of surf filmmaking, as media and technology can be leveraged to give anyone the opportunity to create cinematic gold. By this logic, the grom lurking in your local shore break could be the next Taylor Steele or Kai Neville. With the possibilities of modern technology, you just never know. The spectators who will pack Bird’s Surf Shed to the gills all five nights will be treated to the best of modern surf cinematography and bear witness to the cutting edge.