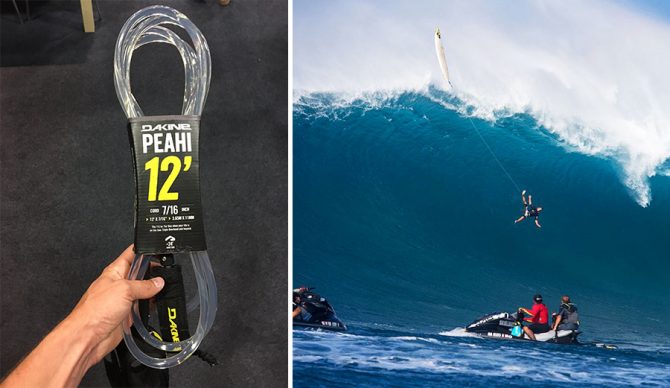 In the realm of big wave surfing, leashes can literally be a lifeline. Dakine has quietly been handing out leashes on the cliffs at Peah’i for those crazy enough to charge the place. The packaging reads: “The 1%’er. For use when your life is on the line: Triple overhead and beyond.”

The modern leash is equally lauded and despised. For every grom psyching on their new bright green comp leash, there’s an old-timer barking about what it was like before “kook cords” when a surfer needed to possess prowess both in maintaining his or her board and swimming after it – lest it end up on the rocks.

But for every complaint about a leggie tying up one’s feet, or getting stuck between the toes, there’s another story about a two-wave hold down where a surfer followed their leash to the surface, or a spot that – prior to leashes – would mean paddling out to catch a monster and swimming all the way in after a closeout. Leashes, in most cases, have increased safety and access.

The history of the development of the leash is one where a simple concept proved more difficult in execution. How do you avoid losing something to the force of mother nature? Well, tethering it to yourself, of course. That much was simple. But fastening self to equipment required selecting an end on the board (nose or tail) and a limb (mainly wrist or ankle). By 1971, where the leash was to be tied to the board and on what extremity was largely settled – tail and ankle proved most safe – but materials were still an issue. That year Jack O’Neill, the famed wetsuit pioneer who’s largely credited with inventing the modern leash, lost his eye to a board that snapped back and hit him in the face. (At the time, many were using stretchy surgical tubing to connect themselves to their surfboard).

Materials improved over the years, but arguably the most important frontier for the leash was big wave surfing. 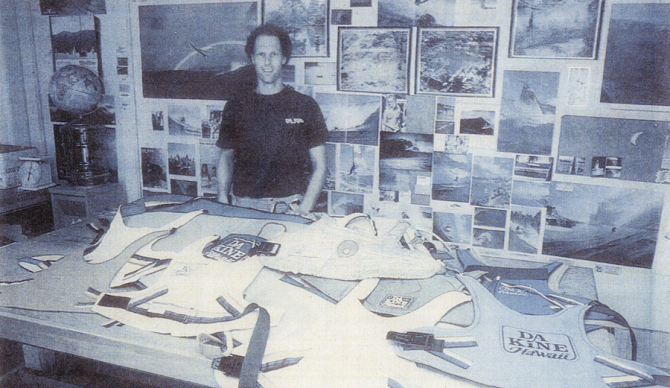 Rob Kaplan built a reputation as a tinkerer – repairing leashes in Maui. His ingenuity led to the creation of Dakine, who’s released what might be the world’s burliest big wave leash. Photo: Dakine

Since the 1960s, Hawaii has been the preeminent proving ground for big wave surfers, so it makes sense it’d be a hub for the innovation of gear specifically designed for big wave surfers. In the late 70s, a surfer by the name of Rob Kaplan got a reputation on the North Shore of Maui as a tinkerer. He would repair fellow surfers’ gear, most often their broken leashes. After repairing enough, Kaplan took it upon himself to create a leash with the kind of bombproof materials and stitching only someone with tried and true experience in heavy surf could. And in 1979 he founded Dakine. 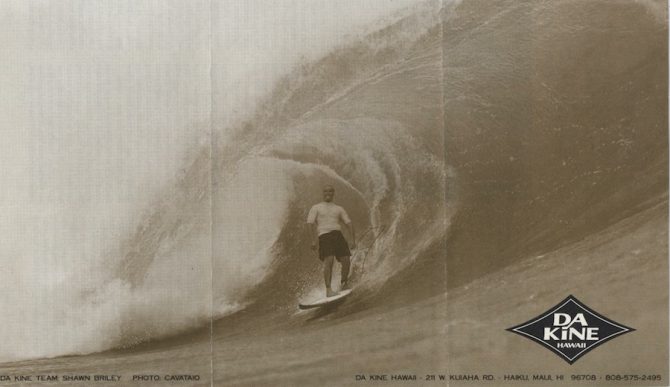 In the years since its inception, Dakine has made moves, literally. Becoming a leader in windsurfing equipment catapulted the brand to Hood River, Oregon – Dakine also began to produce equipment for skiing and snowboarding – but those early innovations for big wave surfing remained constant and true to the company’s early Maui roots. 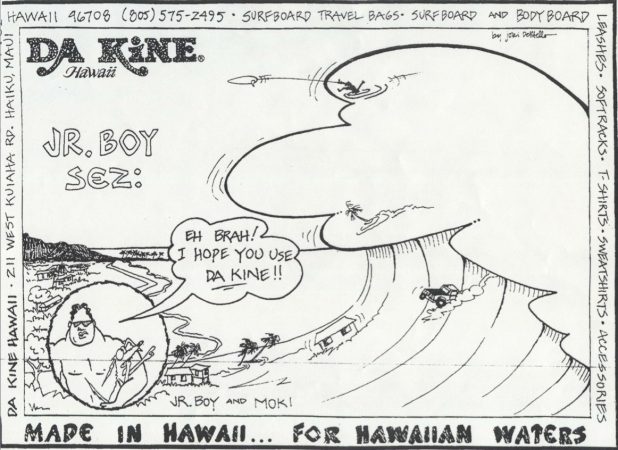 Another ad featuring Jr. Boy and his dog, Moki. Made in Hawaii for Hawaiian waters. Photo: Dakine

Until recently, the only way to get what Dakine calls their Pe’ahi leash was to be gifted one on the cliffs of Haiku-Pauwela in preparation to paddle into one of the biggest waves on earth, the leash’s namesake, Jaws. At 7/16″ thick, and 12ft long, this is a world’s first, and a beast to behold. Seeing it in person invokes emotions of equal parts thrill and terror. Half of you begins to wonder how exhilarating it might be to ride a wave at Jaws, and the other half pictures the wipeout – a 24+ ft. wall of water that comes crashing down with enough strength to tear a thinner leash apart.

Now, starting in January, the Pe’ahi leash will make its debut online, becoming more widely available to the 1% of surfers crazy enough to put it to the test.