Cleaning the ocean is a tremendously overwhelming task. There’s so much to clean, and such a massive area to cover that it’s almost impossible to decide where to start – and that’s if you start. So for Pete Ceglinski and Andrew Turton starting with our marinas and ports was as good a spot as any. They created the Seabin, which is basically a floating trash can that filters in floating trash, oils, detergents and anything else that washes by with the tides.

Ceglinski and Turton designed the Seabin to work in marinas and similar settings because it’s one of the ocean’s relatively controlled environments. Without exposure to the entire ocean, currents and winds will still wash debris and pretty much any form of water pollution by the Seabin in an area it can be securely positioned. From there the ocean simply brings the trash to the Seabin. And as they’ve pointed out on their Kickstarter fundraising page, it may not catch everything floating around in the ocean, but it’s certainly a start. 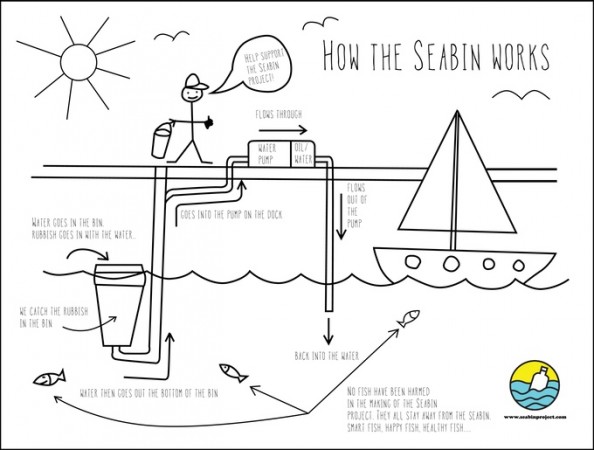 So how does it work? Connected to the dock through a shore based water pump, the Seabin itself will sit at the water’s surface. Water gets sucked into the bin, bringing any debris with it, with the clean water being filtered back out into the ocean. Meanwhile, the trash, oil, fuel, or whatever’s separated from the clean water stays in the Seabin until somebody empties is. The trash itself stays inside the Seabin’s fiber catch bag which can be emptied and reused over and over. It’s a simplified process proposing a small footprint. So like we said, when it comes to cleaning our oceans isn’t starting anywhere is better than not starting at all?