Watch: This Is How Vans Became the Iconic Brand It Is Today 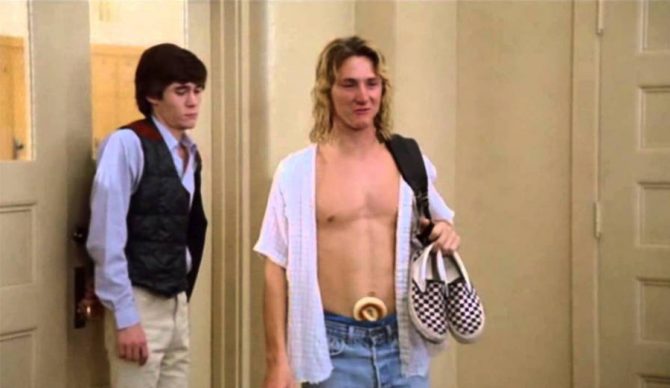 The moment in cinema that made the check slip-on famous.

Who knew that when Jeff Spicoli stumbles out of a VW Bus with his buddies – stoned out of their gourds – in Fast Times, that moment would be one to solidify the integrity of a brand, and specifically a pattern. Sean Penn’s footwear of choice in his portrayal of the lovable dimwit surfer Spicoli was the Vans checkerboard slip-on. Fans of the anti-hero took note. And to this day, the indelible checkerboard pattern is still found on slip-ons and an array off other Vans product.

Episode 2 of Rebull TV’s series Ripple Effect examines the history of Vans, and how the company has become synonymous with action sports and counterculture. As it happens, Sean Penn’s footwear choice wasn’t a singular lucky moment that put Vans on the map. Quite the opposite. The history of company is awash with similar stories. The burgeoning popularity of skateboarding in the 1970’s, for instance, and the fact that vulcanized rubber soles were grippy enough for skateboarders to push the envelope was right place right time kind of luck. “Off the Wall” – Vans’ timeless tagline – came out of how deeply embedded Vans quickly became in the early skate scene, referring to the earliest airs in pool skating where someone would physically come off the wall of a pool. An unheard of maneuver at the time.

The short documentary is full of little tidbits of Vans history like this. Some you may know. Others you might not.

Nathan Fletcher confesses that for the first few years of being on the Vans team, he thought Steve Van Doren was the founder of the company. I was in the same boat, to be honest. But the history if the company is even richer than that. It all began with the Van Doren Rubber Company, started by Steve’s father and uncle. And the notion of family continues to be central to the mission of Vans, down to calling their team riders ‘family’.

This is mandatory viewing for anyone who’s ever owned a pair of Vans.

Unfortunately, we can’t embed the episode here, but check it out on Redbull TV.