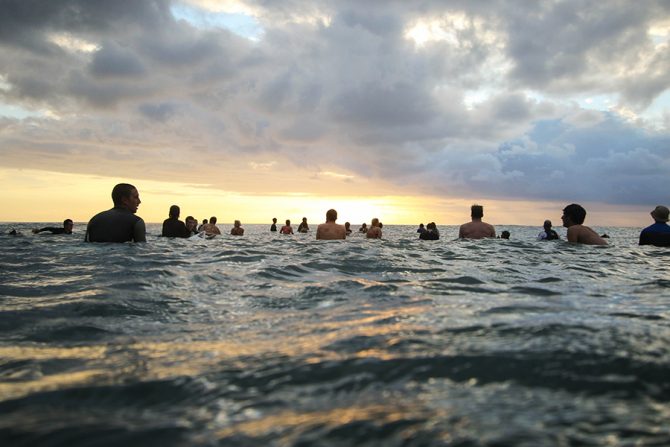 Not my type of party. Photo: Jeremy Bishop

I don’t need to tell you that surfing has an overcrowding problem. And I’m not talking about the latest wave of COVID-19 ‘outdoor enthusiasts’. With a large swell the past week hitting Ocean Beach in San Francisco, I was hoping the bigger stuff would clear a lot of people out of the water. I was so wrong. The clean, slightly overheard swell cleared out the COVID-crew, yes, but at the same time it brought a different breed of surfers out of the woodwork. Suddenly, instead of sharing a lineup with a sea of groms on foamboards, I found myself surrounded by a collection of shortboarders, some of whom knew what they were doing, some not. A terrifying proposition when the sometimes barreling wave was breaking in water three feet deep or less.

According to Shop Eat Surf, in the past year surfing participation numbers have surged from a modest 3.5 million in the U.S. to 5.9 million. While I don’t have the exact info on what counts as being a surfer, if you’ve been in the water over the past few months you know what I’m talking about.

For years, this has been a worry of surfers around the globe — compensating for the increased number of surfers isn’t as simple as building another football field. Or is it? Wave pool technology promises to bring surfing to the masses, and maybe if everyone had a wave pool just down the street, the masses might not go in the ocean. My only question: how many wave pools would it take to fix the overcrowding problem?

Let’s do the math. Can’t be too hard, supply and demand right? For simplicity’s sake, I’m going to stick with the sample size of the U.S., which also helps as it’s the only country I have these ‘surf participation’ numbers for.

On the demand side let’s say that to be satisfied by their surf session, a surfer needs to catch around 10 waves — maybe 3-4 good waves and a few fails/mediocre waves. I think we can safely assume that very few of those 5.9 million surfers will be daily surfers. Newer/weekend warrior surfers might go once a week, the dedicated shredders almost every day, and the rest of us somewhere in between. I’m going to assume that less than a quarter of surfers fall into the 5-7 surfs per week range, so I’m going to take a quarter of the number of surfers in the U.S. (1,475,000) to get an average for the daily amount of surfers getting wet, probably decently more on a Saturday and far less on a weekday. If, on any given day, those 1,475,000 surfers each go out and catch 10 waves, then you’re looking at a demand for 14,750,000 waves per day.

Now, for supply. Surfline lists 336 different surf spots along the California coast. Knowing there is about 12,500 miles of coastline in the U.S., compared to California’s 840 we can… but wait! Alaska. Barely anyone surfs up there and it (apparently) has 6,600 miles of coastline. Ok, so minus Alaska we can compare the rest of the U.S. coastline (5,900 miles) to California’s 336 surf breaks per 840 miles and get a grand total of 2,360 surf spots in the contiguous U.S. (including Hawaii because people do surf there, or so I’ve heard).

This random Quora post (above) states that there are 307,584,000 waves per day in the world. So I did my own system of equations to compare that number to my contiguous-U.S.-plus-Hawaii estimate and got 5,097,600 waves every 24 hours in the U.S. Divide by two for hours of daylight (because overcrowding isn’t quite at the point where I would consider surfing at night to avoid the crowds), and you get a supply of 2,548,800 waves per day. That’s a far cry from the 14.75 million-wave demand.

Would you rather have a Wave Garden or a Surf Lake in your neighborhood?

On the surf park side of things, we at least have more accurate info, although we have to account for the differing wave technologies. BSR Surf Resort can pump out 108 waves per hour, Wavegarden tech can produce 1,000 per hour and Surf Lakes with its five-waves-at-a-time system pumps out 2,000 waves per hour! Assuming we’re going to be seeing a lot more of the 1,000-plus variety in coming years, let’s say 1,000 waves per hour is average. So in a 12-hour day a surf park could produce 12,000 waves. If the total demand for waves is 14,750,000 per day, the ocean can produce 2,548,800 bringing the waves needed down to 12,250,000, which, divided by 12,000 waves per park, per day, brings us to a total of 1,020 wave pools needed to fix the overcrowding problem in the U.S.

Well, that actually doesn’t sound too bad. However, it does fail to take into account the amount of new surfers that will be drawn into the sport by the accessibility of wave pools, not to mention the fact that…..okay, I’m going to stop things right there before I get sucked into a guesstimation vortex.