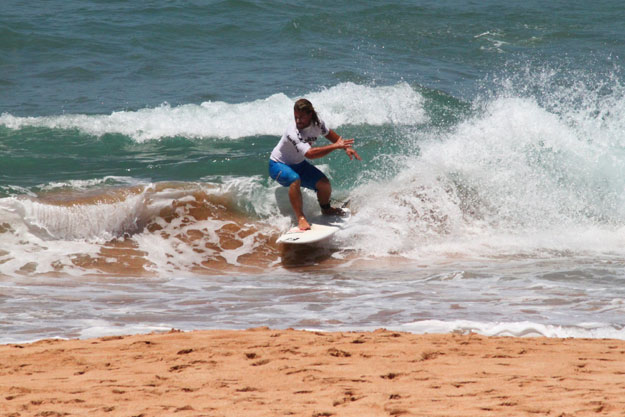 As you can see, the waves were going off and Occy was absolutely KILLING it! Photo: Butler

Disclaimer: This is not a technical article; there will be little mention of “epic floaters,” scores, or even winners. For that information, please click aquí.

After two stuffy hours on a pair of 80-degree accordion buses, I emerged at Sydney’s Avalon Beach and took a breath of… 90-degree air. In scalding 8 a.m. sunshine, I wandered up the hill that overlooked the contest site and stood in the only shade around, which was offered by a stand of weird-looking pine tree relatives. A quick scan of the small crowd: tans, muscles, blond manes, more muscles, dingless boards… Occy? Yes, Occy—at my 11 o’clock, about 10 feet away. I decided I would just chill there for a while and hope to improve my surfing via proximity to legend.

I had woken up at 4:30 in the morning and ventured north for the National Surftag Championships, an event I was told would illustrate Aussie machismo at its finest. Oh yeah, and some damn good surfing.

Australia has these neat organizations called surfriders (or boardriders) clubs. They build community, foster healthy rivalry, and encourage young talent. Mick Fanning, Parko, Adam Melling, Dean Morrison, and Occy (clearly) all surf for clubs. The Surftag contests pit the clubs against each other and the winners walk away with $15,000 and big bragging rights. Here’s what I gather was the basic contest format:

As I continually wiped the sweat from my face, I started talking to the two kids sitting next to me, who were about 12 years old. They said they were from up the street and they were rooting for “North Narra,” they supposed, since Avalon had been knocked out of the comp. When I saw them later, they had Occy signatures on their t-shirts.

It had to be near 100 degrees at 10 or 11 a.m. The Occmeister and I were boiling, even in the shade, so I decided to go for a swim. The sand on that beach was so fucking hot that not only did I burn my feet, I also had a terrifying thought: You could suffer heat exhaustion, collapse in the sand, and by the time anyone reached you, you would have burns all over your body. When I got back to the shade, where Occy was stretching, I heard a guy say, “I think that is the hottest sand I’ve ever felt in my life, and I have walked on some very hot sand.” Meanwhile, the Bronte Blue Ducks were causing a magnificent ruckus, chanting about wanting a ring of death–or something of that nature.

Ninety-eight percent of the people around me were beer-drinking fellas. Occ-o asked his mate for a cold bottle of water before he surfed in the semis. Said friend handed it over. Occy dumped it on his board; the wax was too soft.

I had been taking photos all day, and somewhere around lunchtime, a guy named Matt complimented my camera. As it turned out, he’s a shaper who’s part of the Kirra club, and, uh, he’s friends with “Mark.” He introduced me. I totally played it cool. He said he’d take a picture of us together, if I wanted, but I said, “No, thanks.” I already had one. 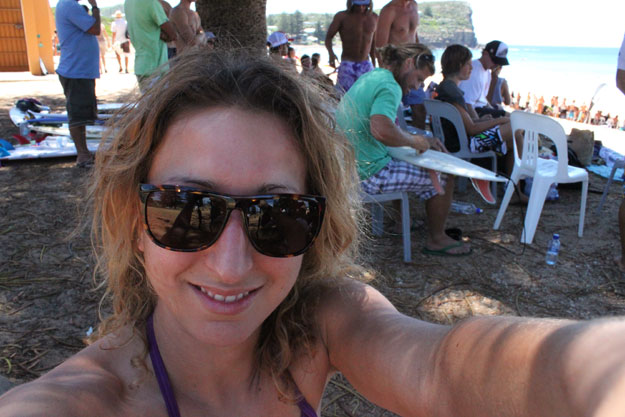 "Want a picture with Occ?" "No thanks. That won't be necessary."