Opinion: I Demand the WSL Add a Third Decimal Point To Its Scoring in 2018 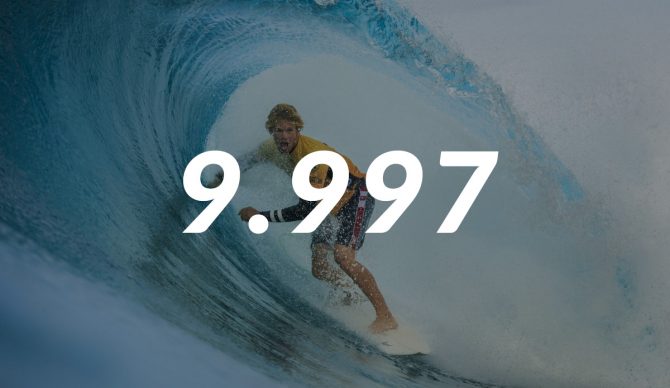 1.Subjectively.
2. With a complete lack of decisiveness and no measure of precision whatsoever.
3. With thinly veiled contempt for surfers’ efforts.
4. Whilst wanking, apparently.

Here’s how I propose they ought to instead score waves:

1. Objectively.
2. With mathematical, clinical decisiveness.
3. Respectfully.
4. Prior to, or post wanking.

“Well, yeah, we all agree on that, man. But it’s just not that easy to judge surfing!” You’re all surely protesting out loud. Well, what I am saying back to you at a more respectful, reserved volume, is that they need to stop judging waves altogether. And start scoring them. The solution I’m suggesting is brave, revolutionary and elegant, sure. But it’s also a startlingly simple one; the genius solves nearly always are.

Here it is: Include the thousandths digit in wave scores.

Before you absolutely lose your mind over this brazen proposal, let’s lean in and take a look under the hood, if you would. The third digit to the right of the decimal (aka the thousandth) has been around for years – at least as long, if not longer, than the WSL itself. Without it, we couldn’t have put a man on the moon, nor would we be able to measure this president’s orange dick. Yet the powerful thousandth digit has been outright ignored to the disrepair of professional surfing’s reputation. If the WSL wants to quickly fix every single thing wrong with scoring surfing – a sport that, by all accounts, ought to be inherently objective and clear-cut to score with – then they must recognize advancements in math and science and include the use of the thousandth digit.

It’s 2018. We’re stuck on a point system that caps out at the damn hundredths digit. You know what, now that I think about it, that’s actually more impressive in its stubbornness than it is outrageous or offensive. No, really. What a smart idea, just ace. Assuming, of course, that their goal is to be as inaccurate and insulting in their “measurement” of an athlete’s performance as possible and have, at the very best, a nebulous notion of who “wins” or gets paid what. Imprecise scoring is a shoulder shrug and a middle finger; a flippant guesstimate of a dedicated competitor’s hard work and unfathomable sacrifice – all the hard, miserable hours spent surfing to get to that moment just to have their professional careers decided and often, quite ironically, decimated by mind-bendingly vague scores. If you think I’m being obtuse, consider that to the salt-soaked slaves toiling away in the cold, wet, horribly hazardous work conditions of the ocean, hundredths and thousandths of points mean the difference between hundreds of thousands of dollars.

Until the WSL’s borderline criminal scoring system goes through the massive overhaul of including the thousandths digit, every single world champion will have to have an asterisk next to their name. The fact of the matter is that none of us really have any clue who the true world champion is or ever was due to what is essentially utter negligence and disdainful disrespect. It’s more than a shame, it makes the blood boil, this rampant disregard for numbers and science; this war on academia which has come to a dystopian head, blowing the flames of worldwide outrage like a Santa Ana bluster.

My revolutionary proposal won’t bring professional surfing all of the respect and credibility it so badly deserves, nor will it solve this ever-deepening divide our society finds itself fervently sliding into. But it would finally be a step in the right direction; an olive branch extended towards equality, so that someday, our children may live to see a scoring scale down to the ten-thousandths, hundred-thousandths, and millionths of a point. So please, join me in signing this petition to urge the WSL to simply wake up and do the right thing. Because numbers don’t lie. People do.