The Art of the Aqua Dump 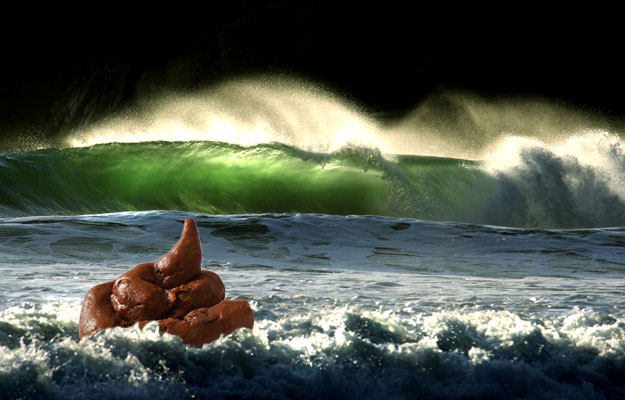 No one wants to see this.

I would like to preface the following piece with a plea to PLEASE not shit in the ocean.  If I had a dollar for every floating turd I’ve swum into while spearfishing, well, I’d have about five bucks.  And that’s not nearly enough money to deal with someone else’s fetid turd in my hair.

There are, literally, millions of surfers.  If shitting in the ocean somehow became the cool thing to do (and it could, Lord knows our subculture has adopted equally stupid trends in the past) we’d all live in a world where the shore break is a mass of churning fecal matter.  And if you’ve ever taken a trip to India, you’d know that’s no laughing matter.

But, anyway, sometimes you’ve just gotta go.  I find I surf much better after a good coffee fueled crap, and generally try to suck down gallon of java each morning to kick start the urge and empty my bowels before paddling out.  Sometimes, though, that just doesn’t work.  Maybe you’re a little bound up from the gluttonous pile of meat you choked down the day before, or maybe you’ve got a churning hangover belly and are going to be squirting out little brown curly qs all day long.  Whatever the case, if you’re gonna be polluting our ocean with the contents of your disgusting body, here’s some shit (pun intended) to keep in mind.

Be ready for the flush

Be a man, use your hand

Don’t shit in the lineup

You lazy bastard, what, you can’t summon the energy to paddle a hundred yards?  There are few excuses to fight in the lineup, but catching a lip to the head and finding yourself covered in poop in one of them.  Think about the people around you, get as far away as you possibly can.

If you typically surf a beach break, chances are this won’t be a problem.  But if you’re lucky enough to live in an area with crystal clear water, remember, people can see you.  I understand that there are those of us who derive a thrill from subjecting strangers to the sight of our assholes unleashing the fury of last night’s taco party, but for the sake of all that’s holy (totally intended), keep it on the internet where that type of depravity belongs.

In the case of perfect aquatic visibility, dive deep, grab the reef, and push with all your might.  Then sit back and watch all the local fish swarm.  Later when you’re enjoying a nice plate of locally caught pescado, served with a side of rice and beans, try not to think about it.

So you’re doing well.  You paddled outside, pulled your wetsuit around your hips and are pushing out a nice solid log.  And wouldn’t you know it, here comes a sneaker set, about to fill your half off suit with water, wrap your leash around your neck and send you to an ignominious, watery grave.  Sorry buddy, it’s all your fault.  The ocean is serious business, you’ve gotta be heads up at all times.