Why Everyone Just Needs to Chill Out 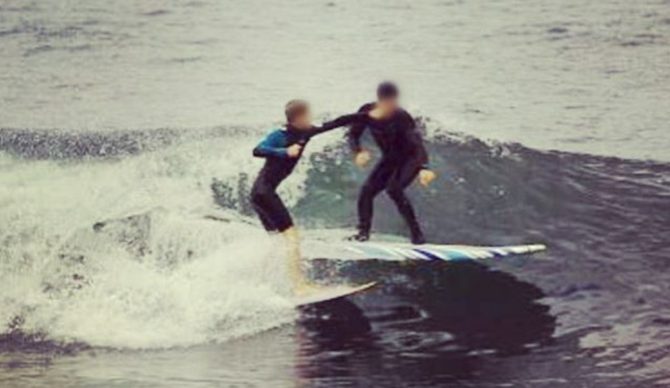 Someone needs to refill their prescription of chill pills. Photo: @kook_of_the_day

I’m not typically one to get baited into confrontation. I tend to keep to myself in the lineup to a fault. Guy drops in on me – whatever, I’ll get the next one. Someone in my way – try to go around them. If they mess up my line, I’ll get another wave, no worries. If it’s a near collision type scenario it’s, “You alright? Everybody’s just trying to have fun. No problem.”

Today was different. I started the day as I often do, by selecting a board to ride. With a modest forecast I stuck with a longboard. I had low expectations, and a desire for a fun mellow session. It didn’t turn out that way.

I made my way to Topanga, which we in The Inertia offices refer to lovingly as ‘Topangry’ – mainly because the following exchange wasn’t entirely out of character for the place. Anyway, after a handful of small waves, I took off on one and cross-stepped toward the middle of my board to trim down the line.

A surly baby boomer with a face like Richard Nixon watched from the inside as I neared – he was right in my line. “Hey!” he started to scream as he flailed his arms. In retrospect, a paddle or two on his part here might have gotten him out of my way, but he paused, deer in headlights.

When I realized a collision seemed imminent I kind of slipped and tried to hold onto my board with my toenails. I just missed him.

He looked at me, “You gotta look down the line dude!” The yell-lecture turned to insults. “Doing your fuckin’ tip dance I almost took your board to the mouth.” I didn’t respond.

Paddling back out to join the rest of the crowd, he joined a friend and I paddled past him. “You gotta fuckin’ hold onto your board. If I’m on the inside you need to fuckin’ go around!” All my fault apparently.

He baited me. “You were right in the way…” I started, but couldn’t finish. Apparently this sort of insolence could not be tolerated. He turned red and started to get even more vocal.

I shook my head and paddled away, and he got onto something with his buddy about how tip-dancing, longboarding hipsters were a contingent of surfers of the “look at me” variety that were ruining America, causing ISIS, killing unarmed black teenagers in the streets, and the root of all evil. Ok, maybe not all of that.

Over the course of the morning I witnessed more beef. An older longboarder was called out for backpaddling. “You’re a condescending prick,” someone said. “Too many fuckin’ kooks in the lineup,” said another. Burn after burn after burn went down. 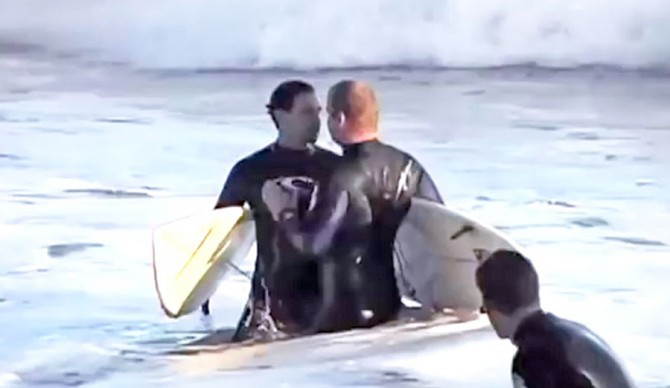 Walking back to my car, I saw said longboarder putting on his glasses, his wife in the car waiting for him, a handicapped placard hanging from the rearview.

My creative writing professor would have called our tendency to dehumanize people in the lineup an act of creating flat characters. This longboarder was simply “the backpaddler” out there. No depth in our analysis of him as a human being. And yet the handicapped placard, the glasses, all painted a vulnerability I and everyone else had never even bothered to consider.

To Tricky Dick, I was the guy who had almost collided with him – it then became convenient to label me based on my appearance and that brief encounter. In other words, he thought he knew my story in 30 seconds. And I thought I knew his: the angry guy.

The truth is, it’s human nature to hypersimplify the world around us so it fits into boxes. But the reality is human beings are much more complex emotionally.

Looking at the state of the country, the election, police shootings, lone wolf terror, etc., there are pockets of bleakness. And it’s easy to take a stand on one side of the issue and hate everything about the other. It’s much harder to treat the other side as human beings controlled by similar emotions that manifest themselves differently.

As in Trump vs. Hillary, it’s quite simple to paint one candidate as the manifestation of pure evil – Hitler and Satan comparisons are not uncommon. And yet both go home to their families. Both are human beings, with all the flaws and emotions that come with that designation. The same can be said for police officers, and protesters in Charlotte, North Carolina. Families of victims of terror, and terrorists themselves.

What exactly does this have to do with a near collision turned bout of anger in the lineup, you might say. Well irrespective of the amount of damage caused, anger and hate is the root of it all. Hate is the default response all around us – from the seemingly insignificant encounter in the lineup or on the highway to the much more newsworthy election, police shooting, or explosion.

I certainly don’t profess to be an expert in this department. I’m quick to anger when I drive, for instance. But maybe, just maybe, the best chance the world has to not go down in flames is simply for everyone (myself included) to just chill the fuck out.