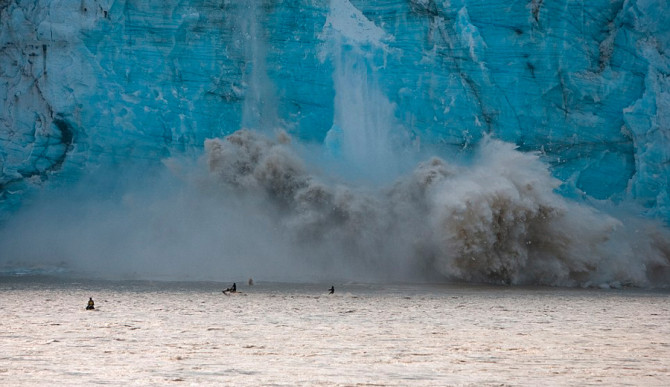 “It was the closest I’ve ever come to death,” – Garrett McNamara

“It’s the heaviest thing I have ever done in my life,” globe-trotting madman Garrett McNamara said at the time. “It’s like the Empire State Building about to come down on top of you.”

Yep, even McNamara who surfs 90-foot behemoths was impressed. Who wouldn’t be? These are jagged 300 to 400-foot faces of a whole lot of freezing slicing off and dropping deep into frigid waters a mere stone’s throw away. There was plenty to be impressed about.

Ryan Casey, creator of the video above, claims to have discovered the break in 1995, when shooting in Alaska. He then went on to meet McNamara while finishing Quest, a documentary on big wave surfing, and introduced the Hawaiian to the wave. Six months later they completed a scout trip in June and returned in August to surf and film the newfound “wave.”

Child’s Glacier offered both left and rights, peeling for hundreds of yards, offering the surfers rides from 30 seconds up to an entire minute. But this is a glacier; glaciers don’t break on any specific schedule. So what did McNamara and Mamala do? Waited for hours and hours, floating amid the ice on their skis until a piece fell off, the only notice they had either sight or the thunderous boom it collided onto with the river to.

“After the scout, I guaranteed that we would ride a wave — any wave,” McNamara said in a press release published on Surfline in 2007 following the feat. “After the first day, I just wanted to make it home alive. Not knowing where the glacier was going to fall, where the wave would emerge, or how big it would be. It was so different to anything we’ve experienced in our big-wave tow-surfing history. I spent most the time thinking about my family and wondering if I would survive to see them again. It was in a realm all its own.”

But they obviously did survive. In the end, McNamara rode a 15 foot wave, while Keali’i caught one ranging between 20 and 25. In spite of the limits McNamara continues to push day-in and day-out, now spending many weeks and months a year towing into massive Nazare and the like, he was adamant that surfing calving glaciers wasn’t going to be a regular thing for him. McNamara concluded: “I wouldn’t recommend it for any one. I won’t be going back. This is not a new sport.”