120,000 Homes Could Be Powered with Renewable Energy from this New Hawaiian Plant 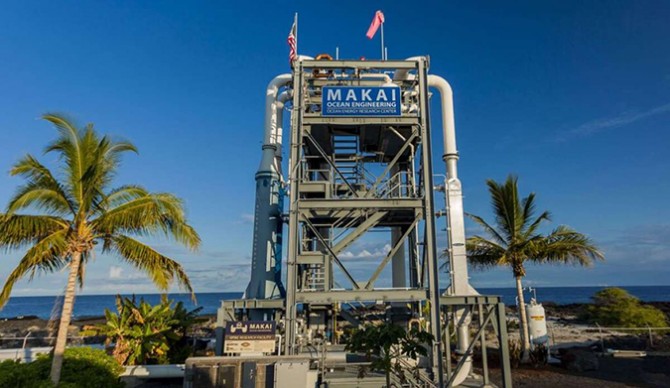 This new energy plant built by Makai Engineering can power as many as 120 homes on its own per year.

Most of our planet is covered by ocean, so it only makes sense to use that as a vast resource of some kind, right? That’s the simple thought process that went into the creation of the Ocean Thermal Energy Conversion (OTEC), a special power plant that uses the different temperatures in the ocean’s layers as an energy source. OTEC’s newest plant has been built in Hawaii by Makai Ocean Engineering, and it promises to power 120 homes a year.

The idea of powering 120 homes a year might seem marginal in relation to the actual demand for clean energy worldwide, but the simplicity of OTEC’s technology makes for a pretty fascinating development. And hopefully, these modest beginnings lead to making a massive impact with a second plant. The system relies on a liquid that requires a very low boiling point, like ammonia, which in turns means it needs less energy to evaporate. The pipes that run through the system are warmed by the seawater taken from the shallower pockets of ocean water. Closest to the shore, where water temps in the area can be quite warm, the 77 degree Fahrenheit ocean water warms the pipes enough to vaporize the ammonia. The gas that is produced propels a turbine which in turn creates energy. That same gas then moves through more pipes which have been cooled from deeper ocean water (about 40 degrees Fahrenheit) pumped up from depths of as much as 3,000 feet. The gas condenses in the cooling process, turning back into a liquid before it circles back to its starting point in the OTEC system’s pipes, creating more and more energy through each cycle.

This same concept of creating energy from the ocean’s temperate gradients has been in use through different stages in history as far back as the 1800’s to different degrees of success. Often, the plants didn’t create enough energy to justify their use, but with the growing demand of renewable energy this OTEC plant in Hawaii the largest in the world. And with the development of this first plant Makai Engineering is hoping to move the entire operation offshore where they’ll have direct access to the cooler deep ocean waters needed for the OTEC system. That development, they say, will lead to powering as many as 120,000 homes each year.