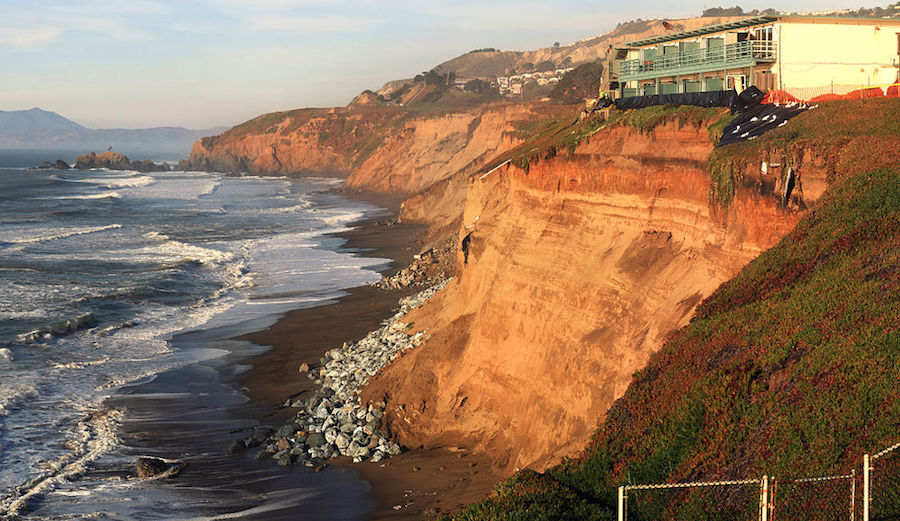 Up and down the California coast, city planners and state officials will be faced with a serious decision to make in the coming decades. According to a recent study, if left unabated coastal erosion is likely to shrink beaches by upwards of 70 percent under sea-level rise scenarios of one to two meters.

That doesn’t bode well particularly for homes and other infrastructure perched on coastal bluffs as rising seas slowly cut away at their foundation below. To save the homes will require erosion mitigation techniques like boulders and concrete walls, explains the study, at the expense of public beach access – a major priority of California’s landmark Coastal Act.

“Beaches are perhaps the most iconic feature of California, and the potential for losing this identity is real,” said Sean Vitousek, the study’s lead author and a post-doctoral fellow at the U.S. Geological Survey when the survey was conducted. “The effect of California losing its beaches is not just a matter of affecting the tourism economy. Losing the protecting swath of beach sand between us and the pounding surf exposes critical infrastructure, businesses, and homes to damage. Beaches are natural resources, and it is likely that human management efforts must increase in order to preserve them.”

In order to predict just how much California beaches are likely to erode, Vitousek and his team developed a computer model called “CoSMoS-COAST” (Coastal Storm Modeling System – Coastal One-line Assimilated Simulation Tool). “The model takes into consideration sand transport both along the beach (due to longshore currents) and across the beach (cross-shore transport) by waves and sea-level rise,” explains a press release summarizing the study’s outcomes. “Although Southern California beaches are a complex mixture of dunes, bluffs, cliffs, estuaries, river mouths, and urban infrastructure, the model is applicable to virtually any coastal setting. Additionally, the CoSMoS model uses information about historical shoreline positions and how beaches change in response to waves and climate cycles such as El Niño, to improve estimates and improve confidence in long-term prediction of coastline changes in Southern California.”

Predicted changes are all based on an absence of human intervention. But, explains the Washington Post, knowing bluff-top development is unlikely to stand up to a 62 to 135-feet cliff recession, “managers could be faced with the difficult decision between prioritizing private cliff-top property or public beaches.”

Many California officials see the writing on the wall.

“The public already has to overcome obstacles in getting to the beach, from limited public transportation to illegally blocked pathways,” said California Coastal Commission Executive Director John Ainsworth. “The prospect of losing so many our beaches in Southern California to sea level rise is frankly unacceptable. The beaches are our public parks and economic heart and soul of our coastal communities. We must do everything we can to ensure that as much of the iconic California coast is preserved for future generations.”