Can an Underwater Soundtrack Really Bring Coral Reefs Back to Life? 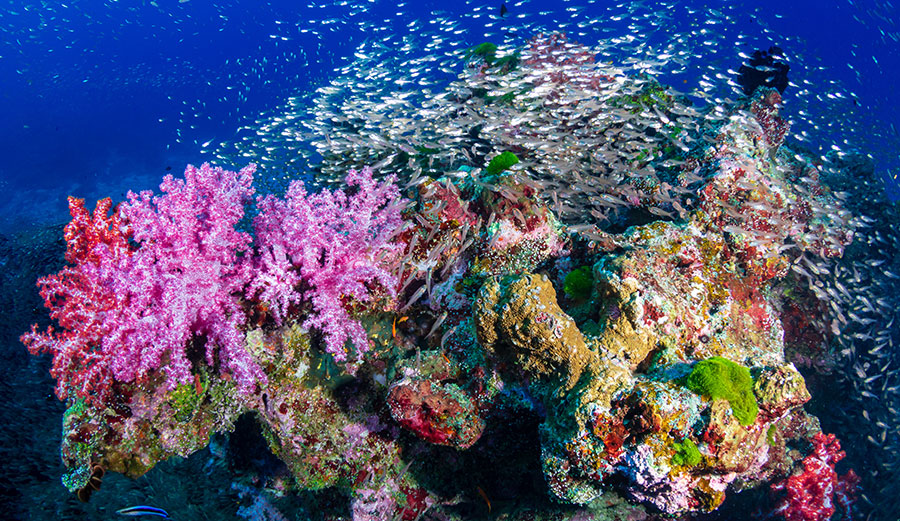 A coral reef in the Similan Islands, Thailand. Photo: Shutterstock

The ocean is a vast, quiet place, right? Vast, yes; quiet, not so much.

As a researcher who studies coral reefs, I’ve floated above many and, when I listen closely, my ears are invariably filled with sounds. There might be the sound of small waves breaking on the beach and coral rubble rolling on the sand as the waves retreat. Beyond the sound of water, there is something quieter.

For some people, these faint noises sound like the snap, crackle, and pop of breakfast cereal when milk hits it; for others, they are reminiscent of frying bacon.

Whatever the analogy, they are natural reef sounds, and noisy reefs are a very good thing. So good, in fact, that we might be able to use the sound of healthy coral reefs to improve the quickly increasing number of degraded ones.

For the past three decades, rising ocean temperatures have put the world’s coral reefs under a great deal of stress. Extreme events can kill large portions of a reef in a short time. For example, 29 per cent of Great Barrier Reef corals died during the the 2016 marine heatwave. It can take 15-25 years for a reef to recover from a bleaching event.

The noisemakers on coral reefs include all manner of fishes and invertebrates. Coral reef fishes produce a wide range of low-frequency pops, grunts, gurgles, and croaks while they feed, fight, court and mate. In fact, much like birds, some fish species sing at dawn and dusk, and sometimes through the night, in underwater choruses.

High-frequency sounds tend to be produced by invertebrates. Of these, snapping shrimps are the winners in terms of pitch and loudness. Snapping shrimps have one enlarged claw that, due to a marvel of anatomy and physics, makes an audible snap when closed rapidly. 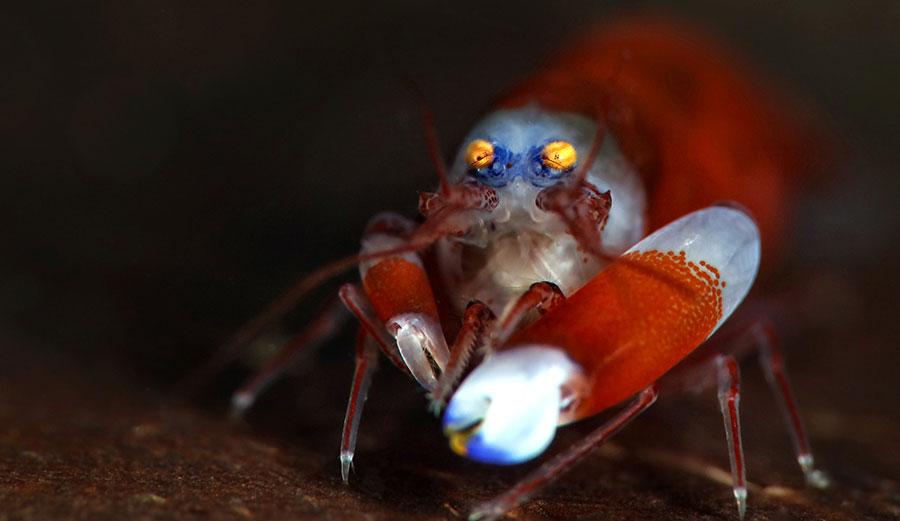 If you had your ear next to the tiny crustacean, the sound could reach 190 decibels, louder than any jet plane taking off. Luckily, no one will ever be that close since these shrimps live deeply ensconced in coral crevices, snapping away day and night.

Why Is Sound Important?

Most coral reef animals spend the early part of their lives as tiny larvae floating in the water. This larval period can last from a few days to several weeks, moving a few meters to hundreds of kilometers from where it was born.

For those long-distance dispersers, the ability to find a new home in the vastness of the ocean is critical. Three decades ago, scientists thought that larval fish were transported at the whim of currents; settling onto a new piece of real estate was largely a matter of chance.

We know better now. Reef fish larvae are able to see, hear and smell reef habitat, and to swim quite competently towards it. </p

Scientists have submerged light traps, known to catch fish larvae attracted to light, with a nearby underwater speaker that plays the sounds of reefs, other habitats or nothing at all. They have built small mounds of coral rock to cover speakers playing sounds, or introduced a tiny fish larva to a chamber with contrasting sound recordings, to see which sound it prefers and swims toward.

These studies show that many larval reef fish are attracted to the sounds of a live reef. Light traps and rubble heaps that play reef noise catch far more larvae than when no reef noise is played. They also catch larvae of more species and more families.

Reef noise can also repel some fish larvae, perhaps because it reveals that there are too many predators or too few potential shoal mates. These species settle in places with sounds they dislike the least, rather than like the most.

What Do Reef Sounds Reveal?

Reef sounds reveal a lot about the state of the coral reef. Louder coral reefs, dominated by low-frequency sounds, tend to be in good health: they have more coral, more fish, more large invertebrates and are more architecturally complex, with lots of caves and crevices.

In contrast, coral reefs with more high-frequency noises tend to be in worse shape: they have more dead coral, more seaweed and fewer fishes. 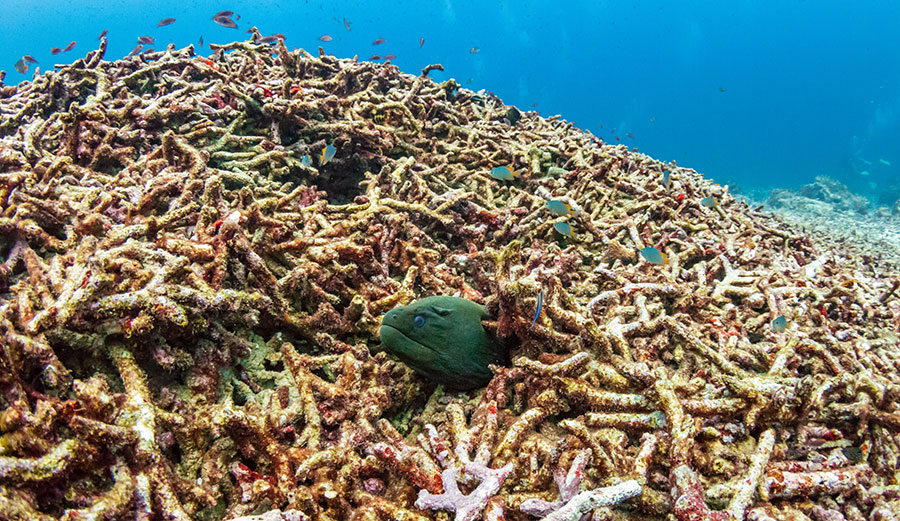 A moray eel pokes its head out of a pile of bleached, dead coral on a damaged tropical reef. Photo: Shutterstock

Coral reefs with a mixture of high- and low-frequency sounds have a larger variety of fish species. Reefs in marine protected areas have complex acoustic signatures like that, as did those on the Great Barrier Reef before a series of recent storms and mass coral bleaching. Degraded Australian coral reefs are now quieter and less attractive to larvae looking to settle down.

The underwater soundscape is critical for a fish larva to know whether there is a coral reef nearby, and whether that reef is a good place to settle. But some species have better hearing than others, and the depth and structure of the habitat can also affect the way sounds emanate from the reef.

Can We Use Sound to Repopulate Degraded Reefs?

It’s an obvious step to go from knowing that natural sounds are important for fish recruitment to using those same sounds to actively attract fish to depleted reefs.

A recent experiment tested this idea and found it promising. Twice as many fish, across all the major feeding groups, settled on coral-rubble reefs that played the sounds of healthy reefs than on similar but silent reefs. Healthy sounding reefs also attracted 50 percent more species.

This suggests that acoustic enrichment could be a new and potentially powerful tool to help build up fish communities on unhealthy coral reefs. The authors warned it has to be used alongside interventions to tackle the causes of coral reef decline, climate change in particular.

Without these simultaneous actions, using an attractive soundtrack to invite small fish onto degraded reefs that offer little food or shelter would be false advertisement. And that never ends well for the fooled party.