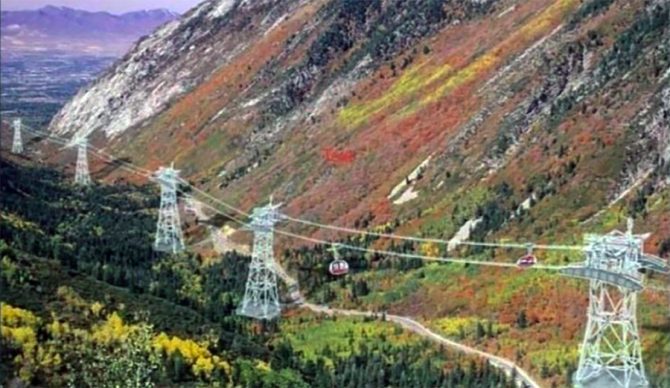 A rendering of the proposed gondola in Little Cottonwood Canyon. Image: Change.org

But it will take more than three Hail Marys for advocates to overcome the latest objection.

This week, the Catholic Diocese of Salt Lake City announced its opposition to the project, asking supporters to join the fight against it.

If completed, the gondolas would ferry skiers through the canyon, supposedly reducing traffic on the already-busy Highway 210. But given the enormous price tag, the project should benefit more than just the wealthy, a spokesperson for the church told the local Fox News affiliate on Tuesday.

“We believe all public policy should be judged by how it impacts the most vulnerable. This one does horrible things for the most vulnerable,” said Jean Hill, the director of the Catholic Diocese’s Office of Life, Justice & Peace. “Because it does absolutely nothing for them. It’s a substantial amount of funding going to something that’s really only going to benefit people who can already afford to ski, first of all, and can only afford this transportation option.”

The church asked all Catholics across Utah to get involved. Church leaders urged church members to oppose the Utah Department of Transportation (UDOT), which has recommended moving forward with the project in Little Cottonwood Canyon, located 12 miles southeast of Salt Lake City.

But many locals and environmental advocates have long opposed the project for its high impact and low benefit to non-skiers. UDOT is in the middle of a 45-day public comment period for its environmental impact statement.

The comment period ends on Oct. 17, when the agency will make a final decision. With yet another group involved in the opposition, the debate seems unlikely to slow down.

For the Catholic Church — as well as many others protesting the gondola — it’s a question of fair use of taxpayer dollars. They contend the project supports upper-class visitors and the area’s two major resorts at the expense of everyone else.

A Change.org petition argues that building the gondolas will impact the environment, worsening avalanches and landslides. The project will require the construction of 22 towers about 200-feet tall, detracting from the canyon’s beauty, the petition argued.

“The gondola will cost $550 million dollars to build,” the petition says. “With that money we could find other solutions, such as more buses that are emission friendly, charging tolls to go up the canyon if the traffic situation worsens, widening the road, etc.”

However, UDOT officials argue the gondola remains the best way to address traffic in the area.