Florida is well-known for its year-round warm climate and beautiful, sandy beaches. While beach tourism drives the state’s economy, people who visit and live in the Sunshine State are losing the long-standing recreational opportunities that they cherish. Ongoing water pollution and harmful algal blooms, including red tides and toxic blue-green algae, are putting public health at risk and causing massive die-offs of fish, marine life and sea turtles.

Red tides were particularly devastating in 2017 and 2018, as coastal communities along the Gulf Coast of Florida suffered through an unusually persistent and toxic red tide that lasted for more than a year. Bloom conditions reached as far as the Atlantic Coast late last summer, which caused beach closures and fish mortalities. Public health was also affected as far as a mile inland through the release of airborne toxins from the blooms.

The problems associated with blue-green algae blooms, or Cyanobacteria, received massive media attention during the summer of 2016. Florida’s governor declared a state of emergency and beaches in several East Coast counties were closed over the July 4th holiday weekend. This earned the affected stretch of coast the dubious nickname of ‘Guacamole Coast.’ Even though most of the state experienced a temporary reprieve from toxic algae blooms over the winter, both red tide and blue-green algae blooms have started to form along the Gulf Coast and in Lake Okeechobee as water temperatures rise with the season. 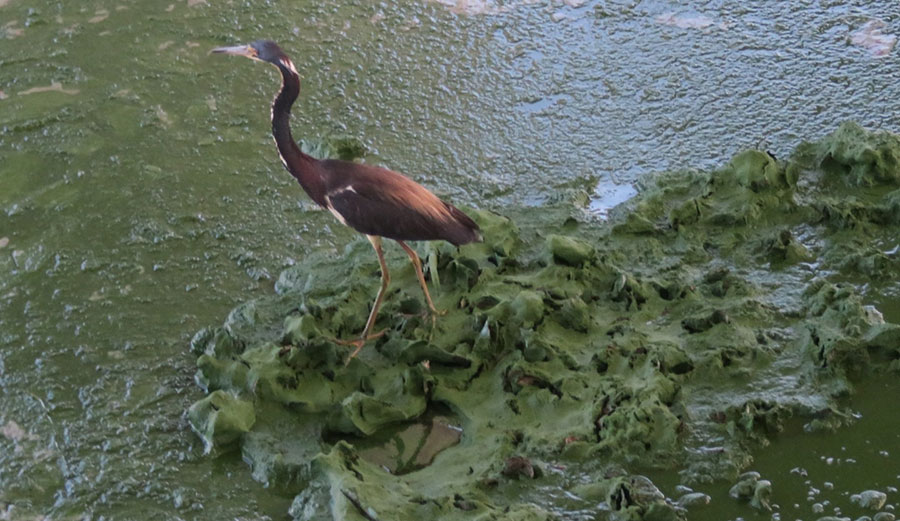 Cyanobacteria form a green scum along the shoreline during a bloom. Image: Surfrider

While the causes of Florida’s algae woes are complicated and long-standing, they are primarily attributed to mismanagement by the state and federal governments of fresh water as it flows from source to sea. For instance, cyanobacteria proliferate in the nutrient-rich fresh waters of Lake Okeechobee in Central Florida. When water levels rise during the rainy summer months, polluted water from the lake is intentionally discharged into the St. Lucie and Caloosahatchee Rivers to relieve flooding pressures. Unfortunately, these releases also devastate the downstream river, estuary and coastal ecosystems by spreading toxic blue-green algae blooms.

In addition, there has been a failure to enact and enforce effective nutrient pollution controls in Florida. Policies need to be implemented that would limit the amount of phosphorus and nitrogen in freshwater systems, and at the coast, which fuel these harmful algal blooms. While big agriculture, developers and industry have been taking advantage of Florida’s relaxed environmental regulations, the environment, public health, and Florida’s valuable tourism-based economy have been paying the cost.

Compounding these threats to public health, the Florida Legislature also eliminated state funding for the Florida Healthy Beaches Program in 2011. Florida has since relied solely on a federal BEACH Act grant to fund beach water quality monitoring and public notification programs. This has forced the Department of Health to reduce the number of beaches they test, sample less often and suspend all beach monitoring between November and March in the northern part of the state.

The resulting gaps in the state’s program motivated Surfrider’s Palm Beach County Chapter to launch their Blue Water Task Force (BWTF) water testing program in 2016 with lab space offered by the Loggerhead Marinelife Center. The chapter started by testing three popular recreational sites on a weekly basis to supplement the information provided by the state every two weeks. Their first monitoring sites included a boat launch site on the Loxahatchee River; a beach located within Jupiter Inlet at Dubois Park that is popular with families and snorkelers; and an Atlantic Ocean beach at the Juno Pier. In 2017, the chapter moved their BWTF lab to Jupiter High School. All water samples are now processed by students from the Green Schools Club. This new collaboration has not only served as a great solution for the chapter’s need for lab space, but it has also been a positive way to involve students in local water quality issues and environmental science.

In 2018, the Palm Beach County Chapter started monitoring two new sites, including Ocean Reef Park on Singer Island, and Phil Foster Park, a beach on the intercoastal waterway that is heavily used by snorkelers and families with young children. The chapter also expanded their BWTF program by setting up a new lab at Forest Hill High School. Environmental Academy students at this school are now testing three new beaches in Central and Southern Palm Beach County.

In addition to sharing their weekly water quality results with their members, the Palm Beach County Chapter is helping to inform the local community whenever harmful algal bloom conditions affect safe aquatic recreation or beachgoing in their area. The chapter’s efforts have inspired other chapters in Florida, including the Broward County, Miami and Sebastian Inlet chapters, to start water testing programs as well. Even better, after many years of building awareness of how important beach water quality testing programs are for protecting public health and Florida’s booming tourism economy, Surfrider scored a victory as the state legislature approved a budget that includes $500,000 to bolster the Florida Healthy Beaches program. Visit the BWTF website to see where Surfrider is testing in Florida and visit the Florida Healthy Beaches Program website to view all state-generated water quality data and beach advisories.

The Palm Beach County Chapter’s Ocean Friendly Gardens program also complements efforts made by Surfrider activists to advocate for federal, state and local solutions to harmful algal blooms in Florida. Ocean Friendly Gardens are maintained without the use of chemical fertilizers, which contribute to high nutrient conditions and cause algae to bloom in many waterways. Ocean Friendly Gardens instead rely on native plants and healthy soil that is built naturally with compost and mulch, to soak up rain and reduce polluted runoff. This past year, the chapter installed a native garden that captures rain from the roof of the MacArthur State Park ranger station that provides a great outreach tool for more than 60,000 people that visit the park each year.

Additionally, Surfrider activists across the state will be supporting state and local legislation this year to reduce the amount of fertilizers that pollute Florida’s waterways. They will also be promoting actions that anyone can take to make their own yards more Ocean Friendly. If there is a silver lining to the devastation that toxic algae blooms have brought to Florida this past year, it may be that Floridians and those elected to public office seem finally ready to make positive changes to protect clean water for this and future generations.

How to get involved:

-Keep your family safe at the beach. Check local water quality reports before getting into the water.
-Urge your elected officials to invest in initiatives to protect and improve water quality.
-Stop using chemical fertilizers. Ask your city to do the same.
-Turn your yard into an Ocean Friendly Garden with native plants instead.
-Get your septic system inspected regularly.
-Give to support Surfrider’s efforts to protect clean water and healthy beaches. Just click here.
-Learn more about how Surfrider is helping to protect clean water and healthy beaches in Florida in the below case study featured in the 2018 Annual Clean Water Report.

Special thanks to the Henry and Ruth Blaustein Rosenberg Foundation for their support of the Palm Beach Chapter’s Blue Water Task Force.