Correction Appended: An earlier version of this article featured an image that reflected swell height after an earthquake in 2011, which is not related to radiation dispersal. The posting of that image in association with this very serious issue was an egregious error for which we sincerely apologize. 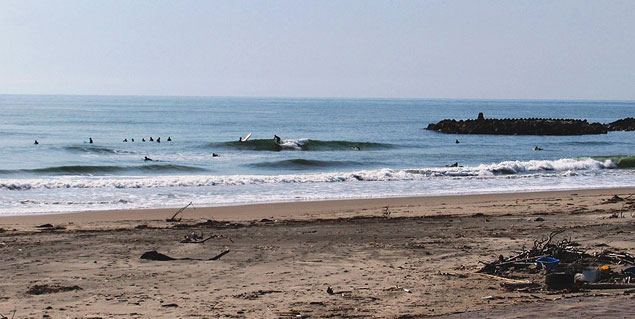 The end result was the largest nuclear disaster since Chernobyl in 1986, and only the second to measure Level 7 on the International Nuclear Event Scale. Now, more than three years later, we may only begin to feel the effects.

According to Bloomberg.com, officials from Japan’s Ministry of Economy, Trade and Industry estimated that the Fukushima facility is leaking at least 300 tons of radioactive water a day into the ocean, and Reuters.com reported that, “the latest leak is so contaminated that a person standing half a meter (1 ft 8 inches) away would, within an hour, receive a radiation dose five times the average annual global limit for nuclear workers.”

The issue affects all of us, and surfers tend to enjoy the outdoors, so it’s no surprise that some of our community’s most prominent voices are sounding off on the issue.

And he’s right. Radiation in some areas will be at 500 times the amount recommended by the International Commission on Radiological Protection. Some people may be able to return home eventually, while others may never be able to see their home again.

In May of this year, radiation from Japan was discovered in tuna caught off California’s coast. A recent study concludes that radiation will reach the west coast of America by 2014. Using charts that the military refers to as a Downwind Fallout Prediction, they show that Cesium-137 will spread to the North American West Coast early next year.

All this begs the now-often-asked question: are the benefits of nuclear energy worth the risks?