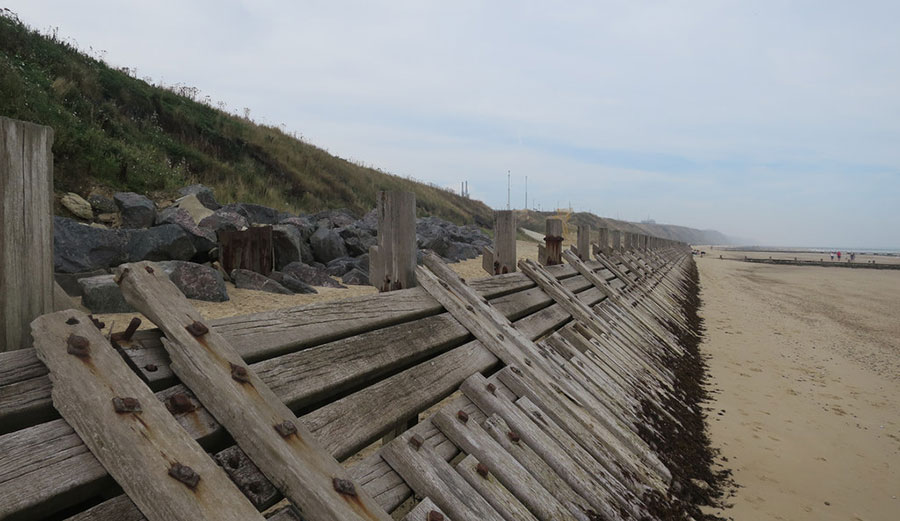 This summer, the UK’s Norfolk coast is undergoing a transformation that has only been seen once in the world before. A giant sandscaping scheme will see 1.8m cubic meters of sand added to the area’s beaches to reshape them as a way of reducing coastal erosion. This is an amazing engineering defense, designed to increase the resilience of the adjacent cliffs to erosion. But it may have a sting in its tail in a generation’s time.

Bacton cliff was created from a mixture of debris left by large ice sheets thousands of years ago. Unprotected, the cliffs erode at a rate of a meter a year. The area’s current sea defenses including groynes – barriers that stretch out from the shore to limit the movement of sediment – slow down the erosion, but don’t stop it. This means that during extreme storm events, such as in 2013-2014, some five meters to ten meters of cliff can be lost overnight.

Perilously close to the cliff edge is a nationally important Bacton gas terminal, supplying up to one-third of the UK’s natural gas after it is brought ashore from the North Sea gas fields. Years of erosion have left just 15 meters between the terminal and the cliff edge. Coastal oil and gas facilities threatened by erosion often have hard rock armoring or groynes placed immediately in front of the cliffs they sit on.

However, history tells us this can actually increase erosion on the adjacent coast. Sand gets trapped between groynes and cannot move to offer protection elsewhere. This means engineers cannot simply build more or bigger groynes in front of the Bacton terminal. 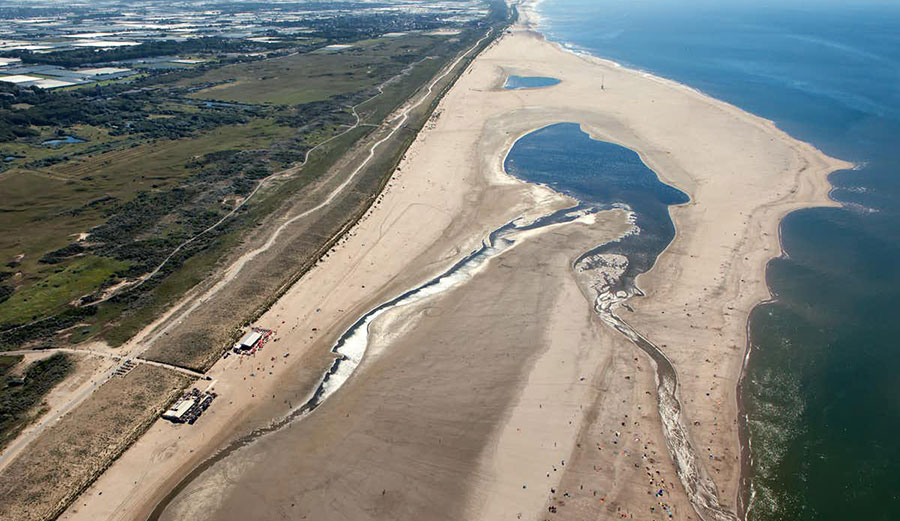 The Zand Motor (or Sand Engine) in the Netherlands.‘ Photo: Zand Motor/Flickr

A common alternative solution is to nourish beaches with extra sand or shingle. This helps build a bigger beach to stop the waves reaching the cliff and so reduces erosion. But this only lasts a short period of time before the new sand is washed away.

In 2011, the Netherlands piloted mega-sand nourishment or “sandscaping”, known as the Zand Motor (or Sand Engine), creating a new 1km by 2km beach near The Hague. The 21.5m cubic meters of sand was designed to protect the coast for 20 years, but is now expected to last longer. The Zand Motor also brought some unexpected benefits. Instead of just being seen as a giant coastal protection scheme, it also has become a place for recreation such as jogging or kite surfing.

Bacton is now attempting a similar sandscaping. If all the sand being used were piled a meter high, it would cover an area the size of 200 football pitches. In practice, the sand dune will be built up to seven meters high in places.

The benefits of the scheme are immense. Although principally protecting the gas terminal, the dune will extend up and down the coastline around it, protecting 100 homes and the coastal road to the south. Tourism may also increase, with benefits and business opportunities for those nearby.

Yet while resilience to erosion and flooding will increase for now, the sand will slowly be moved by the waves, and in a few decades, the sandscape will be gone. Local residents and businesses may expect that a second sandscaping project will follow. But, presently, no such security exists. The long-term issues of a retreating coastline will manifest itself once again in a generation’s time.

The council’s Shoreline Management Plan includes options to try to take further measures to hold the current coastline, do nothing, or realign the coastline landwards of its present position by removing defenses as they reach the end of their life. The long-term plan for Bacton and nearby villages in 40 to 90 years is for coastal retreat. This means defunct defenses will be removed and the coast will be allowed to erode naturally. Part of the coastal road and nearby homes will be lost to the sea.

This will be preceded by a transition period, which will be vital to allow local residents to adjust to the idea of coastal change. But the sandscaping project could do exactly the opposite as it raises expectations of long-term protection and could discourage people from coming to terms with the problem.

The local authority is all too aware of the issues of retreating from the coast. Time and money is needed to assess the options and invest in coastal communities, so they can better cope with the transition. At nearby Trimmingham, a new village hall and community hub opened in 2018 to replace one near the cliff edge. Elsewhere, government support to relocate or “roll back” dwellings is helping householders or small businesses with the practicalities of adapting to the eroding coast.

The sandscaping project may raise the hopes of other coastal communities outside Norfolk that similar schemes could help them too. But the huge costs mean sandscaping is only likely where there is significant non-government investment – £12m of the £22m cost of the Bacton sandscaping scheme was funded by the gas terminal operators. This means we may only see sandscaping next to large, nationally important infrastructure.

Managing the coastline will only get harder as sea levels rise and budgets are squeezed. Engineers can’t keep protecting the whole coast indefinitely, and difficult decisions will have to be made over what to protect, how and for how long. The Bacton sandscaping can buy time to prepare people for a slow, dignified retreat. But while the community may have won the battle against erosion, it will ultimately lose the war.