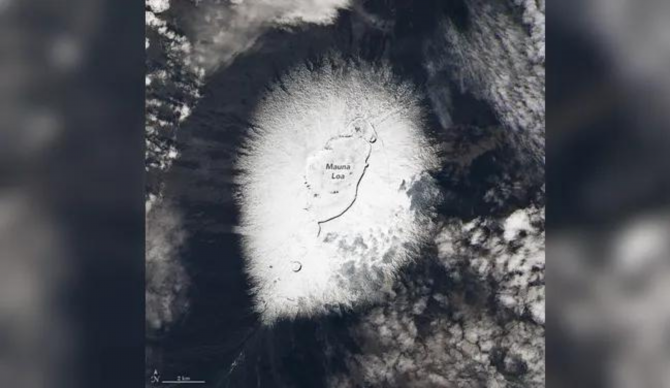 Parts of Hawaii’s Big Island are being hit with a second rare and extreme weather event in a matter of weeks as the National Weather Service issued winter storm warnings for island summits above 10,500 feet. One of those summits, Mauna Loa, began erupting on November 27 and stopped on December 13. It was the first eruption in nearly 40 years, closing its longest quiet period on record. Less than a week later the National Weather Service announced Mauna Loa and Mauna Kea will see blizzard conditions at elevation, which included up to eight inches of snow and wind gusts as high as 100 mph.

Snow on Big Island isn’t rare, but blizzard-like conditions are. And NASA’s satellite image of a snow-covered Mauna Loa was eye-catching, to say the least. On Monday, Mauna Kea cameras from the Smithsonian Astrophysical Observatory’s Submillimeter Array showed images with extremely low visibility as well as another camera being completely covered in snow and ice.

A vigorous cold front is expected to bring impactful weather to all areas of the state Sunday through Tuesday. Here are the latest forecast updates as of Saturday afternoon. #hiwx pic.twitter.com/uV7djY9Xzp

Meanwhile, the White Christmas conditions at elevation coincided with other extreme weather warnings that would affect people through the rest of Hawaii, as well. Wind and thunderstorm warnings were given for Sunday night, followed by heavy rainfall creating increased chances of localized flooding. The Saturday evening warning also called for the low pressure system to generate a powerful Northwest Swell impacting the islands through Tuesday.