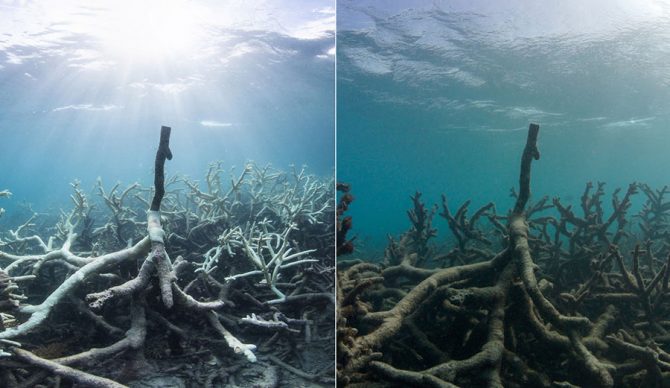 Before and after photos of coral bleaching on the Great Barrier Reef’s Lizard Island. Photo: The Ocean Agency/XL Catlin Seaview Survey

Coral reef ecosystems are of a significant importance to society, with billions of people relying on them for protection against weather events, for the provision of protein sources, and for economic survival tied to fisheries, eco-tourism, and surfing. Yes, even surfonomics is a real thing. In recent years, coral reefs have been in decline around the globe and are degrading at a rapid rate. According to the United Nations Environment Program (UNEP), in 2002, an estimated fifty-eight percent of all reefs were threatened by human activities with more recent reports suggesting that nearly 60% of existing coral reef systems will be gone by the year 2030. The cool thing though, is that it’s not too late and this decline can be reversed or ameliorated by effective action and legislative policy based on evidence-based conservation methods.

Since reefs produce some of the best surf spots in the world, we’re overdue to take a look at what might be at stake and what a loss of coral reefs might mean for the future of surfing. For starters, the effects of both anthropogenic activity and subsequent climate-related changes are putting surfing at increasing risk since good waves are strongly related to healthy oceans and coastlines. Coral reefs play a significant role in this. So with climate change and human activity creating major shifts in coastal ecosystems (sea level rise, ocean warming and acidification, etc) there is the potential for a decline in the health of local waters, beaches, and aquatic ecosystems that could result in diminished ability to surf many spots and subsequent loss of local surfing communities and the surrounding culture. If you’re not convinced yet, take a look at the Caribbean or a peek at the Great Barrier Reef over the last few decades, which might just be in its final terminal stage with an estimated 40-50% decrease in coral cover since the 1980’s and an estimated 29% of shallow water corals having died from bleaching in 2016.

In a 2013 Think Progress interview, Chad Nelsen the CEO of the Surfrider Foundation highlighted some of these issues. “The problem with climate change is that we’re not perceiving it as incremental,” he said. “These things will accelerate, even if we stop all carbon emissions today,” and “by the time it starts accelerating to a speed where we can perceive the change, it’s going to be too late and we’ll be suffering major consequences on the coasts.”

Quite possibly the biggest threat to coral reef systems is ocean acidification – a byproduct of increased sea water temperatures and the burning of fossil fuels that has the potential to dissolve entire reef systems. Since the world’s oceans are essentially giant carbon sinks, about 30% of all carbon dioxide (C02) emissions are absorbed every year, and increased carbon pollution from the burning of conventional fossil fuels is adding to the burden that the oceans must deal with. As more carbon dioxide is absorbed, the oceans become more acidic and as a result, coral reefs cannot absorb the calcium carbonate which is required to build and maintain their stony skeletons (more dissolved carbon dioxide > acidic oceans > less corals).

A coral reef after a bleaching event. Photo: PopSci

Increased atmospheric carbon also leads to warmer ocean temperatures and when combined with acidic waters, the fragile coral reef systems — which rely on available calcium carbonate and narrow temperature windows for survival — can die as a result of coral bleaching. Add overfishing and other forms of marine pollution to the equation and the calculated result is a significant reduction in coral reefs – between 60-90% by 2030.

As recent as 2012, Roger Bradbury, a respected ecologist specializing on coral reefs, stated that coral reefs have ceased to operate in an ecologically functional sense. Essentially, they’ve become “zombie ecosystems” which are susceptible to collapse within the span of a human generation (Bradbury, 2012). Anthropogenic impacts such as overfishing, ocean acidification, global climate change, increasing levels of pollution, and even chemical-laden sunscreens have been identified as increasing threats that are pushing coral reef ecosystems towards collapse and the outlook for reversing these trends does not look too bright for the future of coral species.

Current institutional thinking toward coral reefs has been focused on research and mitigation efforts where scientists, politicians, and environmentalists claim there is hope for the future of the world’s coral reef ecosystems. In order to save them, it has been suggested that all overfishing must be curbed, marine reserves need to be established and enforced, and regulations need to be imposed on coastal development and pollution. Others suggest that messages about the severity of the anthropogenic effects need to be limited to avoid what has been dubiously termed the “Anthropocebo Effect” in which people will accept that human-induced destruction will be irreversible as a geologic force and prevent action from being taken. Is this messaging all naive misguided hopefulness and is it possible that interventions, policy changes, and other efforts are just too little, too late? Who knows? But it’s never too late to try. For the most part, it seems as though everyone is pretty positive – even academics who are pretty much always grumpy from having to deal with undergraduate lecture series – sharing an optimism moving forward if the proper conservation and restoration efforts are undertaken.

As the human population continues to grow in future years, anthropogenic impacts will continue to affect the world’s oceans. Development, tourism, and even overfishing can be expected to increase and with those increases, coral reef ecosystems will continue to suffer. Rational solutions to both the current and future problems driven by human activity in the marine ecosystem will come directly from localized solutions and not blanket policies such as achieving zero ocean pollution and eliminating the occurrence of overfishing. Additionally, it would be prudent for those who have the mentality that there is still hope for the partial recovery of a global pristine or even functional coral reef ecosystem to begin to recognize that a reorganization of approaches and reallocation of resources for balancing future human ambitions and resource use with future conservation efforts — in a world with significantly less or no remaining coral reef ecosystems — will be required.

For the most part, this issue is not discussed much within the surfing community at large (with climate change being a large and complex issue with a number of other effects on the ocean and coastal areas what is a humble surfer to do?), but imagine what would be possible if we tackled this topic with the same fervor we would as if there was another Deepwater Horizon-type oil spill.

Surfers are iconic beachgoers, ambassadors, and spokespeople for the ocean and have the ability to change the conversation about climate change. This can create a critical mass that has the potential to inspire others to take action and voice their opinions on the way to making real positive change happen. Individuals can take it upon themselves to live a more sustainable lifestyle and encourage the people and communities around them to do the same. Education is key.

For the water people, remember that the ocean is our playground and it is up to us to advocate for these special places.