I’m Living Through the Apocalyptic Vibes on the U.S. West Coast

Outside my window in the Haight-Ashbury area of San Francisco is an almost familiar sight. As far as I can see — from the Twin Peaks tower to the trees of Golden Gate Park — the city is shrouded in something, but this time it’s not fog but smoke from the recent wildfires in California and to the north in Oregon and Washington.

Yesterday, the sky was orange as a thick layer of ash and smoke sat between us and the sun, filtering out everything but the reddish orange light. The silver lining was that the smoke was far above us, leaving the air at ground level relatively clear. Today, instead of the apocalyptic orange we’re left with a yellow-grey haze which might look more natural but in reality is much worse.

On PurpleAir, The Air Quality Index (AQI) has jumped into the 200 range, with parts of the city currently reading around 300. At around 100-150 I usually think twice about going outside. Today, despite the waves looking good at Ocean Beach, it’s not even a question. Surprisingly though, I see more people out today than there were yesterday. Maybe surfers are more worried about sharks mistaking them for seals in the orange twilight than the effects of breathing in this air while exercising. Hard to blame them in either case. When I paddled out in the orange half-light yesterday, every ripple seemed like a man-eating monster from the deep, and today between not leaving the house all day and watching from the surf cams as everyone else enjoys the clean conditions, I am sorely tempted. 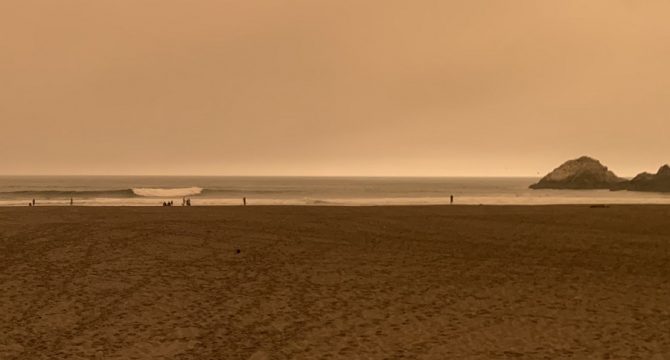 With all the smoke from the recent wildfires it’s not predicted to clear until Sunday at the earliest.

In the words of Calif. Governor Gavin Newsom: “If you don’t believe in climate change, come to California.”

These pictures cry out for change. CA has invested more in wildfire prevention than any time in our history. Enacted bold climate policies. But it’s not enough.

We must do more. We need action at EVERY level. CA cannot do this alone.