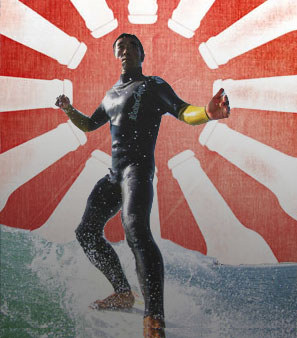 How much would sacrifice to keep surfing? Would you knowingly compromise your health to get in the water every day? How about your children’s health?

How much would you sacrifice to keep surfing? Lord knows, wave riding demands certain sacrifices, but would you knowingly compromise your health to get in the water every day?  How about your children’s health?

This is the Faustian bargain that Japanese surfers living around the Fukushima nuclear power plant are currently making.  Ever since the massive earthquake and tidal wave on the first of March caused the meltdown of three nuclear reactors at the Fukushima Daiichi Nuclear Power Plant, the compromised containment units have been leaking radioactive water into the Pacific.  How much and how radioactive the water is, nobody is sure.  Measurements taken near the plant have yielded samples containing as much as 200,000 times more radioactive particles than what is considered acceptable by international standards. To put this into perspective, the meltdown of the plant at Fukushima rates at level 7 on the International Nuclear Event Scale (INES).  Incidentally, that’s as high as it goes – the same level as Chernobyl.  Would you surf near Chernobyl?

I ask myself this question while standing on the concrete sea wall at Oarai, some 100 kilometers south of Fukushima, in early September.  The legendary Pipeline surfer Takayuki Wakita is standing beside me.  He’s worried.  Despite the oppressive heat, the black sand beach is deserted.  So is the car park.  So, for that matter, is much of the usually bustling resort town.  The kids are inside – they’re not supposed to play outside too much for fear of being exposed to radiation.  The only people in the water are here to surf the Gotcha G-Land Pro, an annual competition held by the Japan Pro Surfing Association (JPSA).  According to Wakita the beach is usually full of spectators, but this year no one wants to come.  Even some of the competitors are missing, unwilling to take the risk of surfing in water that could poison them for the rest of their lives.

There’s no way to reliably tell if the water breaking in waist high waves along a small sandbar is contaminated.  “Lots of different figures have been published, and it is difficult to say which one is more correct as the contamination doesn’t spread in a uniform way,” Green Peace ocean radiation specialist Wakao Hanaoka explained via email.  Unlike land-borne radiation, which is much better understood, the consequences of ocean bound radiation remain largely a mystery.  “”Hot-spots” exist in the sea (at the bottom) as they do on land,” says Wakao, but: “Further research needs to be conducted by the govt. to establish where these areas are, how contaminated they are.”

The Japanese government has declared this particular beach one hundred percent safe, according to the president of the JPSA, Mineto Ushikoshi.  “The best the JPSA can do is listen to the government.  Their officials say this water is safe so we decided to run our competition as usual to try and bring people back to these beaches.  After the tsunami, five hundred kilometers of coastline was closed to people and it has had a very harsh economic effect on the coastal towns.  It’s going to take time for these areas to recover from 3.1.1 (the name given to the events of March, 1st, 2011), but we feel that if we can have contests in some of these places, and do it in a safe way, then we can raise awareness about them and help them rejuvenate”

Their response sits in stark contrast to that of Oarai’s fishermen, many of whom have not gone back to work since March, according to Aya Takada, a Bloomberg reporter who has written about the town in the past.  Although fishing from the port, next to the surfing peek, had been allowed to resume after a suspension immediately after the tsunami, it has since been suspended again because unacceptable levels of radiation were found in some fishing catches.  The prefecture of Ibaraki, where Oarai is located, reports on their website that radiation levels of .093 microsieverts per hour have been clocked in one of their ports – less than a chest x-ray but, then, how many chest x-rays do you get every hour?

Wakita doesn’t take a warm-up surf and voices his unease with the competition directors.  Others agree with him, but are more conflicted.

“The truth is that up until the tsunami, we were using a lot of electricity and we needed the power from those nuclear plants,” said one local surfer.  “Without nuclear power plants there will be less energy and people in the power industry, as well as other industries will lose jobs.  We can’t say that’s going to be alright – we need to deal with it,” he says.  Though, how to deal with it is another question.  “I think we can live without nuclear power, but it will take a long time.”

Manobu Watanabe, a surfer from near Fukushima is getting ready for his heat when I grab him.  “My house and my family are okay, but I can’t surf at any of the old spots.  They are all closed because of the radiation.  Now I drive down here, over an hour, in order to surf.”

Does he worry about the radiation?  “I can’t say it’s not on my mind.  The parents are worried about their children too.  Everyone is worried.  I think about it every time I get in the water.”
So, decision time:  What would you do?  Of course, it’s just hypothetical, so give thanks to whatever God you pray to for that little bit of mercy, and please…please don’t forget about those who aren’t so lucky.