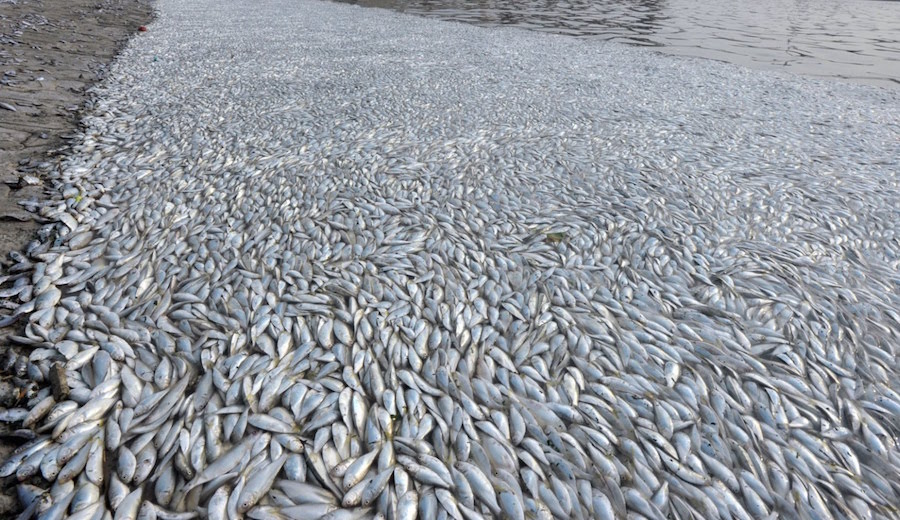 Since April, millions of dead fish have washed up along the shores of Vietnam. Photo: Screenshot/Youtube

Vietnamese citizens are furious. For the last six weeks, protesters have overtaken cities across Vietnam demanding answers and to hold their government accountable.

It all began in April, when thousands – now millions – of dead fish began washing up along Vietnam’s Eastern shoreline. The alleged culprit of the die-off? A steel plant that may have disposed of cleaning chemicals through its wastewater pipeline.

The result is threatening the livelihoods and well-being of local residents. The New York Times reports that hundreds have grown sick from consuming bad fish. And with the edibility of fish in general in question, consumers are becoming more sheepish when it comes to buying it–impacting incomes of local fishermen. Not to mention, many fishermen along impacted areas are having difficulty finding live fish to pull-in in the first place.

These sorts of die-offs aren’t completely unheard of. In recent months, China, Chile, and elsewhere have seen dead fish wash up on their shores. But the nuance lies in both the cause and scale. It has gotten so bad in Vietnam that the government enlisted the help of the military to bury the fish and clean up the beaches. And unlike other contexts, where the alleged causes are natural, all signs point to industrial waste.

Perhaps the worst thing to come out of this ordeal, though, was a revelation regarding the operating mentality of the corporation allegedly at fault. In a press conference, one company official told reporters, “You have to decide whether to catch fish and shrimp or to build a modern steel industry… Even if you are the prime minister, you cannot choose both.”

The logic is frightening and irresponsible, and has been met with so much public outcry that it birthed the hashtag #ichoosefish on social media, which has since become a mantra.

But this way of thinking isn’t unique to this flare up, or even Vietnam for that matter. It’s an age-old trope: conservation vs. industry. Think the numerous waves that have been destroyed for the sake of harbors, marinas, golf courses, and other developments.  Corporations like Formosa Ha Tinh Steel, the company whose plant allegedly dumped the chemicals in Vietnam, champion development for the sake of human progress. And sure, human development and modernization are important, especially among lesser-developed nations. But when corporations are given carte blanche to achieve progress, and the cost is the health and well-being of people, well, what good is it then?

If, like me, the country you call home is located thousands of miles from Vietnam, what’s happening there may feel a step removed – foreign even. Indeed, it’s the Vietnamese people that will ultimately have to hold the alleged culprit of this environmental catastrophe responsible. But, it’s not difficult to imagine how impunity in Vietnam could send shockwaves around the world.

In developed countries like the United States, there is serious regret among large swaths of the population – especially surfers – regarding what’s been done to nature in the name of human advancement. Unfortunately, we can’t go back and right those wrongs. But what’s happening in Vietnam is happening all over the world. And what we can do is stand with local populations that say they are unwilling to sacrifice the health and well-being of their local environments for the sake of industrialization.

The challenge is to find new ways toward human development that are sustainable, or not at all. Vietnamese protesters are calling for accountability, but ultimately this is what they stand for. Whether we like it or not, we all must choose. As for me, I choose fish.