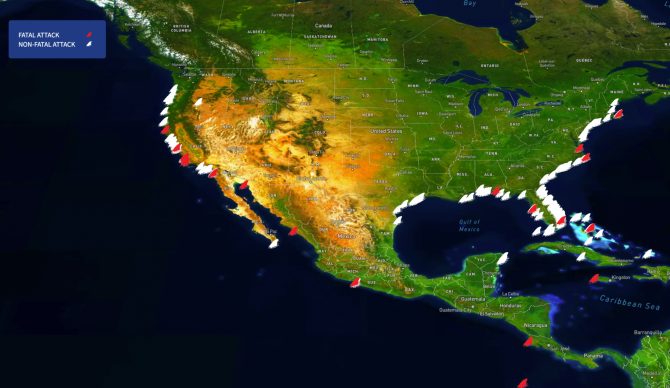 Here’s a fairly ubiquitous nugget thrown into almost every shark conservation conversation: “In a typical year, less than 10 humans are killed by sharks. Contrast that with the astronomical figure of 100 million sharks killed by humans.”

While you’ve likely heard that comparison or any variation of the statistic before, this particular quote is  an ethos that David Angotti, founder of FloridaPanhandle.com, uses to run his organization. He credits the data point for inspiring a genuine deep dive into actual shark attack statistics, and how those statistics match up with our general perception of shark attacks. Some of the findings are objectively silly, like the fact that 15 percent of people in a national survey said they’d agree to be attacked by a shark “for the cool story.”

The off-the-wall reference and the database behind it all have a purpose though.

“We believe that these educational, interactive shark attack statistics will help the general public realize that shark attacks are incredibly rare and normally survivable,” Angotti says. “Based on the data, we should not fear the sharks – rather, we should protect them.”

Angotti’s research is all being compiled into a comprehensive guide that includes an interactive map, which details specific non-fatal and fatal shark attacks all over the world, and decades of statistics that shed some light on what’s myth and what’s real when it comes to our relationship with sharks. For example, “while commercial air travel is widely considered to be among the safest modes of transportation, the chances of dying in a plane crash is exponentially greater than being merely attacked by a shark,” Angotti says. “To put these numbers in perspective, there were 3,416 commercial airline deaths worldwide between 2011 and 2020. In the past thirty years, there have been less than 300 shark attack deaths and 3,000 total attacks.”

Here are some other quick data points and facts that stand out in the guide:

-In the last 20 years, more shark attacks occurred on Saturdays.
-In the last two decades, more shark attacks happened in July than any other month.
-Fatality rates are higher for shark attack victims in Africa and France.
-You have an 89.4 percent chance of surviving a shark attack.
-According to Statista, dogs are the third most deadly animal to mankind, behind snakes and mosquitoes.
-Great white sharks are responsible for the highest number of attacks on humans as well as having the highest attack mortality rate (42.5 percent).
-Over the past 20 years, the United States has seen the highest number of reported attacks (291) by far, but its 8.2 percent fatality rate is dwarfed by places like Australia (44 percent fatality rate), Africa (66.7 percent), and France (73.3 percent).

And some interesting (or just odd) survey responses, showing the general population’s perception of shark attacks:

If you’re so inclined, take a deep dive into this interactive shark attack guide.