New Study Suggests Hurricanes Are Bound to Get More Severe 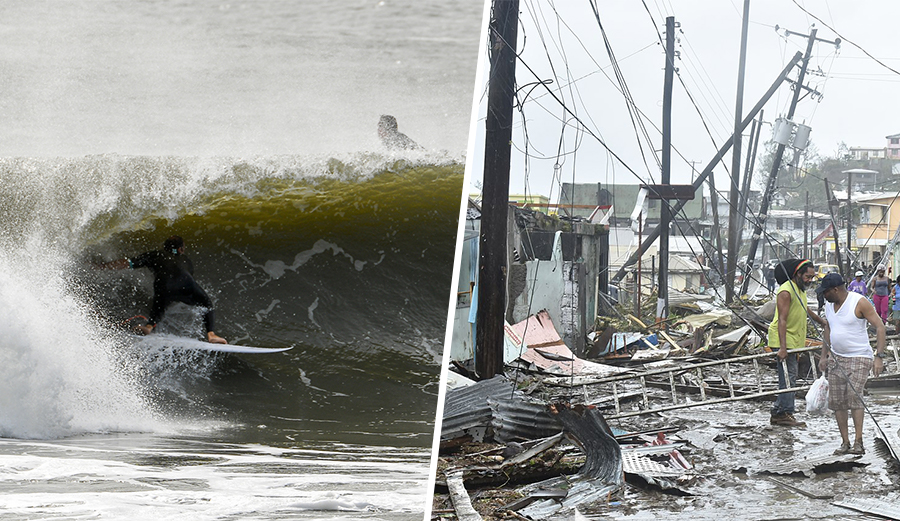 Hurricanes deliver groundswell to the East Coast’s nooks and crannies, but often at a price. And new research suggests storms are bound to get more severe. Photo: Tim Torchia (R)/ Wikimedia Commons (L)

Residents of Long Beach, New York have a saying. They call it the day the ocean met the bay, because, in effect, that’s exactly what happened. In October 2012, Hurricane Sandy made landfall in the tri-state, wreaking havoc in coastal New Jersey and New York. High tides and storm surge inundated Long Beach to such a degree that water and debris from Reynolds Channel to the north and the Atlantic to the south met in the middle. The town was underwater.

The mid-Atlantic has since recovered from much of the trauma caused by Hurricane Sandy. But surfers who hail from New York and New Jersey that lived through the chaos still approach hurricane season both leary and anticipatory. That goes for most Caribbean, East Coast, and Gulf surfers. Hurricanes spin up powerful groundswell for days at a time. They also flatten cities.

Take the hurricanes of 2017, for example. Hurricane Irma spelled destruction for a host of Caribbean nations, and Puerto Rico is still recovering from the effects of Hurricane Maria – both of which radiated sizable surf to the northernmost nooks and crannies of the Eastern Seaboard. Moral questions about reveling in the playful surf spun up by a storm that is also tearing homes apart abound.

The 2017 hurricane season was one for the record books with two Category 4 storms making landfall in the mainland U.S. (Harvey and Irma) and a Category 5 (Maria) hitting Puerto Rico. And, according to newly published research, warming oceans – a result of climate change – will lead to more intense, bigger, and longer lasting storms in the future.

“Human-induced climate change continues to warm the oceans which provide the memory of past accumulated effects,” the study explains. “The resulting environment, including higher ocean heat content and sea surface temperatures, invigorates tropical cyclones to make them more intense, bigger and longer lasting, and greatly increases their flooding rains.”

Using Hurricane Harvey as a case-study, the authors demonstrate that hurricanes cool tropical oceans through strong winds and evaporation, and the rainfall dropped by a storm closely matches the aggregate evaporation that takes place. Warming ocean surfaces accentuate that cycle. In the case of Harvey, “record high ocean heat values not only increased the fuel available to sustain and intensify [it] but also increased its flooding rains on land.”

For East Coast and Gulf surfers, the news spells an ethical dilemma. Stronger, longer lasting storms sounds like great news if they bring waves and only waves to coastlines that commonly go weeks and sometimes months between major swell events. If there’s a chance they make landfall and level towns – no bueno.

The study goes on to suggest that resilience and contingency prep in the areas of Texas, Florida, and Puerto Rico that were heavily impacted by hurricanes in 2017 was inadequate and that hurricane-prone regions would do well to learn from these examples.