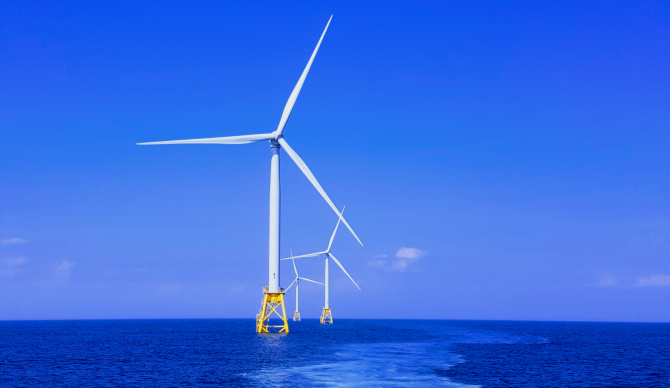 Offshore wind energy isn’t a novel idea in some parts of the world but it’s just getting off the ground in the United States. And it could be a major positive shift toward sustainable energy sources in the U.S. considering it’s second in the world in overall electricity usage while holding the highest usage per capita. Those numbers will only go up with more electric cars on the roads, too.

In 2016, the first U.S. offshore wind farm was erected off the coast of Rhode Island and still runs with just five turbines producing 30 kilowatts — not nearly enough to produce energy at a commercial scale. New York and New Jersey significantly ramped things up s00n after when they set out to build the largest offshore wind farm in the country. On the West Coast, it’s resulting in a first for California: auctioning off parts of the Pacific Ocean. Developers were expected to shell out anywhere from $6-8 million Tuesday for starting bids, leasing space in the ocean to develop commercial-scale wind farms off the coast of Eureka, in Humboldt County and Morro Bay, in San Luis Obispo. The areas will host as many as 450 floating turbines, producing as much as 4,500 megawatts, enough to power 1.5 million homes in California, according to the San Jose Mercury News.

“For years we have been extracting a limited resource — oil — with all sorts of impacts, burning it while moving it around with tankers and oil spills,” said Gary Griggs, a professor at UC Santa Cruz. “Now we have something that is renewable, clean and sustainable. It’s always going to be there. This is a huge change, in my view. What we do in California reverberates across the country.”

So, how high did auction prices actually go?

Forty-three potential buyers took part in the first day of the two-day auction. Reuters reports that Tuesday alone drew more than $387 million in bids, with one of the Central California leases attracting more than $100 million.

“We know that this works. We know that this can provide a huge slice of our our electricity needs, and if we’re going to solve the climate crisis we need to put as many clean electrons online as we can, particularly given increases in load demand with electric vehicles,” said Josh Kaplowitz, vice president of offshore wind at the American Clean Power Association. “We can reach our greenhouse gas goals only with offshore wind as part of the puzzle.”