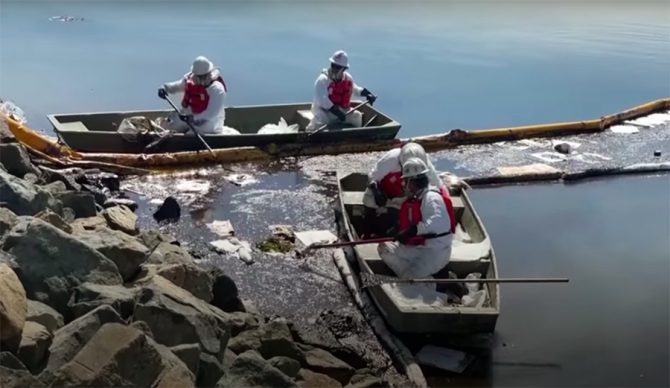 The Amplify Energy pipeline leak that spilled nearly 130,000 gallons of post-production crude oil into the Pacific Ocean four miles off Huntington Beach October 2 is a strong reminder of why California needs to get rid of oil drilling on land and offshore once and for all.

The Huntington Beach spill resulted in a 13-mile-long slick of post-production crude oil that has already killed wildlife, coated a carbon-storing wetland with oil, closed beaches, and shut down fishing along more than 20 miles of Orange County coastline.

This isn’t the first major offshore oil spill for California. In 1969, a blown pipeline near Santa Barbara spewed between 3.5 and 4.2 million-gallons of crude oil into the Santa Barbara channel over 10 days. It is still the largest oil spill in California history and third largest in the United States after the Exxon Valdez (Alaska) and Deepwater Horizon (Gulf of Mexico) – although it’s important to note that the 1979 Ixtoc 1 spill in Mexico’s Bay of Campeche (off the Yucatan Peninsula) was larger than the Valdez spill. All of them were devastating for the environment, which further emphasizes my point.

More recently, in 2015, a Plains All American pipeline on the north Santa Barbara coast near Refugio State Beach broke, spilling 142,000 gallons across four marine protected areas and many sacred Chumash coastal sites. More than 100 miles of shoreline was impacted.

In 2019, the Los Angeles Times published a feature story about 35,000 deserted oil wells in the hills and valleys of inland California that pose immeasurable environmental hazards for wildlife and those living nearby, as well as a massive bill awaiting taxpayers once cleanup efforts ensue. And that’s just the deserted wells.

Oil drilling on land and in the ocean in California relies on aging infrastructure that, each passing day, adds more risk to wildlife, ecosystems, and communities.

California and the nation need to move faster in the transition away from fossil fuels. This past weekend’s spill is an unfortunate reminder of that.

In the meantime, ExxonMobil seeks to restart drilling in three offshore rigs that have been closed since the 2015 Refugio spill. Just last week, the Santa Barbara County Planning Commission rejected the oil company’s request to use 24,800 trucks a year to transport oil drilled from the three rigs as a bypass to the still-broken Plains All American Pipeline. Their rejection of the plan will be presented to the Santa Barbara County Board of Supervisors in November.

It is time to push county supervisors, state legislatures, and national leaders to decommission oil in California. It’s time we make smarter choices about our energy sources.

Each day we don’t we are at risk of another disaster like we saw last weekend in Huntington Beach, or worse, an environmental catastrophe like California saw in 1969.

It is time to end oil drilling in California.