Our Oily Oceans: Exposing the Truths and Myths 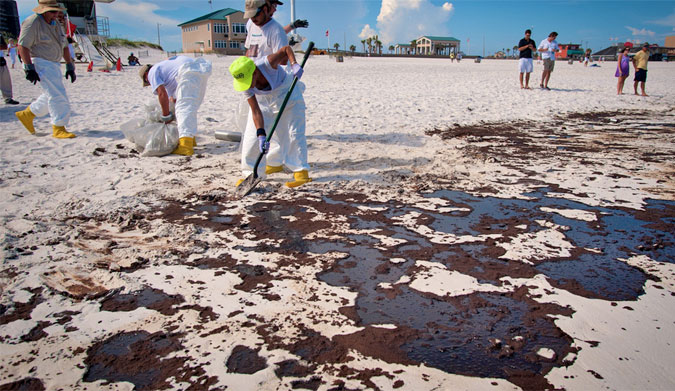 Volunteer cleanup from the Deepwater Horizon oil spill in the Gulf of Mexico in 2010. Photo: Florida Sea Grant

There has been a lot of press lately regarding oil in our oceans. We have all heard of the tragedy of the Exxon Valdez, the American Trader off the coast of Huntington Beach in the ’90s, and, of course, the Deepwater Horizon Incident (more commonly known as the BP disaster) in the Gulf of Mexico. The recent incident at Refugio State Beach in Santa Barbara reignited the very same human impact conversations we have all heard before. However, it would be daft to think that oil isn’t always present in our oceans. But what substantiates a toxic level of natural crude? What exactly sets these events apart from naturally occurring oceanic oil seepage? I would like to diffuse some myths about the presence of this pollutant and present some facts that might not be widely known.

The answer lies mainly in the natural resilience of nature itself. Microbes already present in the water are quick to feed on the oil, which is rich in energy. However, these organisms are particular about the process in which they consume. Similar to the way we eat our own meals, these microbes go after the most simple, smooth (define this as tasty) molecules first before attacking the less appetizing particles. This process, coupled with the almost instantaneous introduction of too many consumables, causes nature to become overwhelmed and proverbially push itself back from the dinner table. In areas where the oil has become soaked into the sediment, microbial action can cease due to oxygen deprivation. Deep-burrowing creatures and the larger animals that eat them are passing the toxins up the food chain and contributing to a greater concern.

Refugio State Beach in Santa Barbara recently incurred a spill of over 100,000 gallons from an onshore pipeline which was buried, within accordance, 4 feet below the surface. 25 live oiled birds, 13 dead, 18 live oiled mammals, plus 2,600 cubic feet of saturated soil has been found and removed as of late May. The combination of the close proximity to the shore and the cove-like shape of the beach make this a particularly nasty spill due to the way in which the coastal topography is cornering the contaminants and allowing them to soak into the sediment 20 to 30 feet deep.

What might come as a surprise is that just off the same coastline of Santa Barbara some 20 to 25 tons of oil naturally flows from seafloor cracks daily. Yes, daily. It is one of the world’s largest seeps. However, much of the natural oil is consumed by these same oceanic microbes previously mentioned. Closer to shore, these organisms have not had an opportunity to adapt and will respond much differently. This proves why a single 100,000 gallon incident has wreaked more initial havoc than a steady 25 ton seep.

The Gulf of Mexico is a completely different story, as it boasts an astounding 600 known natural seeps.
Events that are widely covered by the media only actually account for a very small portion of the total amount of oil pollution in the ocean. While approximately 10 percent of the oil spilled into the water comes from a tanker, rig, or pipeline incident, tens of millions of gallons of oil enter our oceans each year due to human activities, such as boating, littering, daily activities, and driving. Yes, driving. A slow steady drip of motor oil from vehicles onto asphalt is eventually washed by rainwater into sewers. From there it is flushed to the ocean or off to natural spillways and into the water directly. This makes it impossible to remotely detect the amount of pollution that derives from this process. Oil spills are generally viewed as tragic scenes with dead fish and tar-spattered birds. However, this is rarely the case.

The question has been raised time and time again about what we can do to reduce the amount of oil pollution that enters our coastal waters. In this oil-dependent society that we live in, a complete separation from this product is not likely—at least in our lifetime it isn’t. The United States is the largest culprit worldwide, as we consume 1.85 billion barrels (seventy-seven billion, seven hundred million gallons) of oil daily. Some suggestions to consider would be to carpool as much as possible, purchase more products with natural ingredients, as well as foods that have not had pesticides applied. Disposable products such as plastic dinnerware, water bottles, and other plastics can be substituted for reusable items. Of course, we can all do our part to demand that our governments encourage renewable energy instead of subsidizing oil.

Will Schmidt operates out of the Southern California coastline as a lifestyle athlete and a brand ambassador for SIC, Nemo Equipment, Carapace Wetsuits, Switch Vision, Astral Designs, Isvara Organics, SUP Gladiator, AirheadSUP/DryPak, Goal Zero, and Vitargo. Follow his adventures through his website, www.areyouinspiredyet.com as well as on Instagram: @willschmidt_official