Oxford Research: Oceans Warm at the Equivalent of 1.5 Atomic Bomb Blasts Per Second 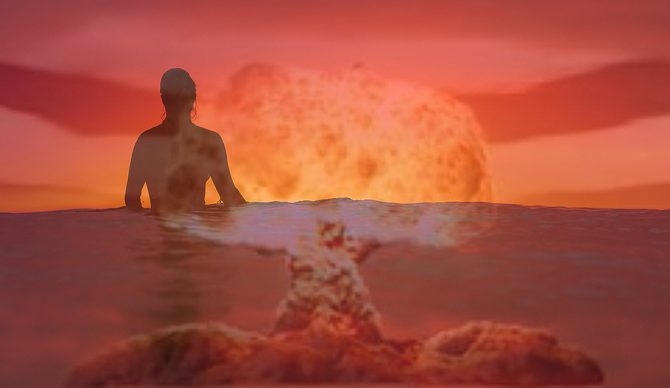 According to a report from researchers at the University of Oxford, climate change has been warming the ocean at a pace equivalent to one atomic bomb explosion per second over the past 150 years.

Researchers published the findings in Proceedings of the National Academy of Sciences. They say the oceans are absorbing around 90 percent of the excess energy caused by greenhouse gas emissions and by their estimates, since 1871, it’s added up to about “436 x 1021 Joules.” Since most of us don’t speak math, The Guardian decided the “1.5 atomic bomb explosions per-second” would be a suitable analogy to digest after crunching the numbers.

Data has actually only been collected since about the 1950s, according to The Guardian, and so scientists stretched their research back to 1871 to understand past changes better, saying that will help them more accurately predict the future impacts of climate change.

” If we know what the sea surface temperature anomaly was in 1871 in the North Atlantic Ocean we can figure out how much it contributes to the warming in, say, the deep Indian Ocean in 2018,” said Professor Samar Khatiwala.

“I try not to make this type of calculation, simply because I find it worrisome,” said Professor Laure Zanna, who led the research. “We usually try to compare the heating to [human] energy use, to make it less scary…The total heat taken up by the oceans over the past 150 years was about 1,000 times the annual energy use of the entire global population.”

But that measurement is actually just accounting for the entire 150-year span the research covered. According to Dana Nuccitelli, an environmental scientist, the rate of heating between 1990 and 2015 is that of three Hiroshima bombs per second.