Patagonia Makes Beer Now And I Tried It 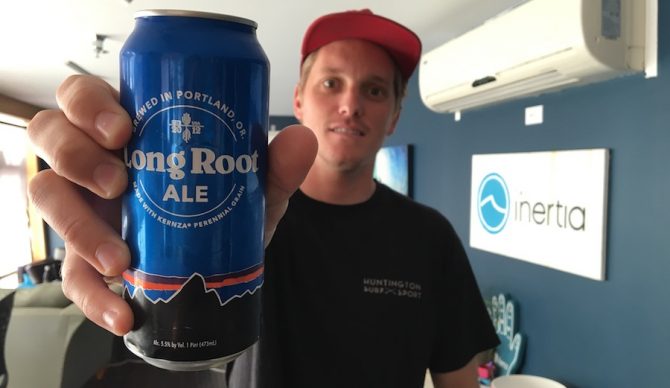 This is beer that’s better for the planet and it’s damn good. Photo: Weisberg

I fancy myself a beer guy. My wife calls me a ‘snob’. I politely interject that I don’t (always) hold my nose in the air when others around me prefer Miller Lite over tastier suds. And I’ll drink a Pacifico with lime on occasion when it’s hot, or a Coors Banquet if it’s party time. But, for the most part, I stick to brews with smaller distribution numbers that (I think) just taste better. Fine. I’m a snob.

Better, a nerd. I’ve waited in line on multiple occasions for the most recent can releases of local breweries. I know the hop varieties I prefer in an IPA – citra, or galaxy – over others. I follow my favorite breweries on Instagram. And in general, I try to keep my ear to the ground as it pertains to general beer news.

So imagine my surprise to learn that a clothing brand was doing the unthinkable and dipping its toes into the malty, carbonated pool of the global beer market.

Patagonia has been in the business of food since 2012, when the company first began selling wild salmon jerky. Now, the fully fledged Patagonia Provisions, an offshoot of the main brand, has a wide offering of foodstuffs for anything from long expeditions to family meals.

On Monday, Patagonia Provisions announced beer would be added to the list. In partnership with Hopworks Urban Brewery in Portland, Oregon, the new Long Root Ale is an ale made with Kernza, “a perennial grain grown using regenerative agriculture practices,” according to Patagonia Provision’s website.

Patagonia Provisions aims to both draw attention and offer a solution to some of the major issues involved in the modern industrial process of global food production. “Today, modern technology, chemistry and transportation combine to put more distance between people and their food than ever before,” says Yvon Chouinard in a statement on the website. “We harvest salmon indiscriminately or farm them in open-water feedlots, putting wild salmon in peril. We overgraze our prairies, fill our livestock with antibiotics, and drain fossil aquifers to water unsustainable crops. Chemicals reign supreme to maximize production, and the unknown impact of genetically modified organisms hovers over the entire industry. In short, our food chain is broken. Patagonia Provisions is about finding solutions to repair the chain.”

In the case of the development of Long Root Ale specifically, the use of Kernza over other grains is significant. Unlike other grains used in beer production that are harvested (and must be replanted) annually, Kernza is a perennial grain, making it ideal for the production of a more sustainable beer.

But why exactly did Patagonia jump head first into the beer market? According to the website, “[They’ve] been known to enjoy a good brew from time to time.” Cue statements from detractors about the bearded, nano-puffer clad outdoor enthusiasts that love to slug a cold one. But it also has to do with the future of farming. Apparently, “[Patagonia’s] sourcing experience—starting way back in 1996 when [they] switched to organic cotton and continuing through [their] research for Provisions foods—has taught [them] a thing or two about farming.” So, they jumped on the beer train. Simple as that.

On to the pièce de résistance, how’s this stuff taste? In a word: damn good. And I’m not just saying that. This is a smooth ale with hoppy notes, but not overly bitter. It’s easy to drink, but not too easy. It’s got taste is what I’m trying to say. Beer nerds would talk about it’s creamy mouth feel, it’s color, and lacing on the glass. I’ll save you those details. Bottom line: it’s great and better for the planet. Slug one responsibly.