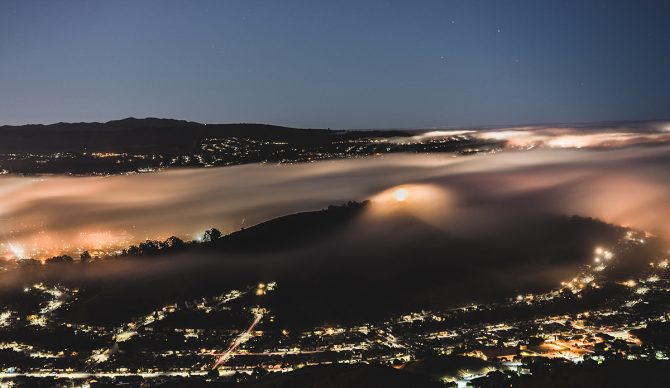 If you live in California, you may be in one of the 800,000 homes whose power is being shut off as a precautionary measure by Pacific Gas & Electric. The utility provider announced in a statement this week that 34 counties in Northern California would be impacted by a  “widespread, severe wind event beginning Wednesday,” and the proactive blackouts are meant to eliminate the possibility of electric utilities being the cause of fires.

This is a direct result of climate change and we can use this as a reminder to be more engaged in solving the problem.

Electricity is going to be shut off for the duration of California’s predicted wind storm, with the potential for outages to last “five days or longer” in some areas. The preemptive measure is the product of years of fires in California, causing such a disruption to our economy that we literally have no way to pay for it all. It’s tangible proof that we’re currently living in the proverbial “climate change apocalypse” — not one that’s happening at some point in the future, and not one that’s just affecting other people. It’s affecting our lives and livelihoods in California now and will only get worse unless radical changes are made.

Here’s the problem: the words “climate change apocalypse” evoke images of natural disasters. Hurricanes, floods, fire and brimstone rain from the heavens in our view. We don’t likely consider electricity just vanishing, causing a major disruption to how we live, work, and play.

Climate change’s most immediate threat is disrupting the stability of our economy and society. In California, losing electricity is one of the worst disruptions to that. If you’re prepared to live and work normally without electricity for 72 hours, congratulations on being way ahead of the curve.

As a resource, electricity is such a vital service to the state that it is heavily regulated by the California Public Utility Commission. The CPUC approved the fire-shut off plan as an emergency measure in May 2019, buying some time while we figure out how electricity can be supplied safely to people who live in rural areas occupied by thick tree lines and foliage.

There is no simple solution to this. Californians can expect more extreme weather, coupled with tree-killing droughts, and PG&E can’t just cut down all the trees within 100 feet of every electric wire they own. Perhaps getting electricity to rural areas safely is to establish an underground infrastructure of power lines, but this would be an enormous cost to the state that I’m not sure we could afford. In the meantime, this means we’d best be prepared for regular blackouts that last for days.

Assuming you’ve read this far, you may wonder what you can do about the problem. The most important thing you can do is eliminate your own contribution to climate change. It’s not enough to just reduce your carbon dioxide emissions; you need to wipe out your total climate impact each year. The simplest step is to support nature’s own mechanisms, which revolve around living plants that absorb CO2 and give off oxygen. For example, if you plant a tree anywhere in the world, it will absorb CO2 over its lifetime, a well-mixed gas in the atmosphere. So a tree planted in Indonesia will be effective at absorbing CO2 you emit in California. Meanwhile, just as important as planting trees on land is protecting and restoring “blue carbon” ecosystems in the ocean. The ocean stores 86 percent of the carbon in the carbon cycle and holds 10 times more carbon than all biomass on the land. Coastal blue carbon ecosystems are the most effective and fastest carbon sinks on the planet. There are initiatives like the SeaTrees Project that tackle this, which helps protect and restore kelp forests, mangrove forests, coral reef ecosystems, seagrass meadows, and “ridge-to-reef” watersheds. You might also consider wiping out your annual carbon footprint with offsets, which cover all of your fossil fuel usages from flying, driving, and home energy use.

Editor’s Note: You can find this and other contributor editorials in our Opinion section by clicking here.