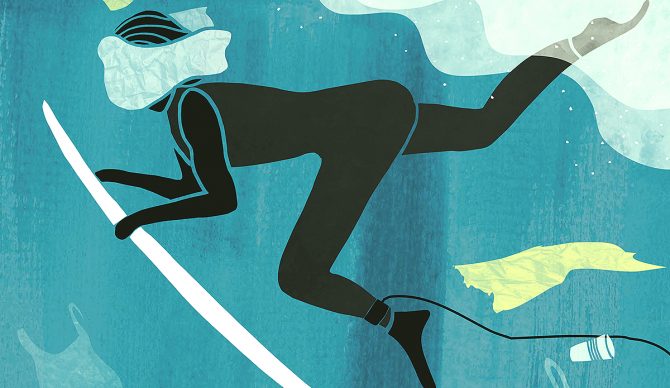 “A million” is always a nice round number to use for exaggerating things. Anything, really. Whenever somebody uses a number with those six silent zeros following it that’s your automatic cue that whatever’s being referenced is about to be blown completely out of proportion. No, Becky, our waiter isn’t taking a million years to come back with the check. Stop being dramatic. No, Charles, you did not just drop a million dollars on bills last month, that’s a ridiculous amount of overhead.

Microplastics are a million times more abundant in our oceans than we ever realized though. Literally. According to a Scripps Institution of Oceanography study at the University of California San Diego, “The quantity is one million times more numerically, but when you multiply the quantity times volume, the volume of the larger pieces is still much higher.”

By volume, the concentration of microplastics — pieces of plastic broken down over time to sizes smaller than 5mm — is five to seven times greater than scientists previously believed, according to the author of the study, Jennifer Brandon. Her team says that makes the overall amount of microplastics in our oceans a million times greater than what researchers had believed through previous research methods.

How in the world do you find this out? Common methods of testing water for concentrations of microplastics are both intuitive and counterintuitive.

“For years we’ve been doing microplastics studies the same way (by) using a net to collect samples,” Brandon said, which presents a very obvious flaw. If the whole idea of microplastics is that they’re really, really small, scooping them out of water with a net is going to pretty inefficient. Even if you’re using a really, really fine net. According to a 2015 review of studies on microplastics, between 1971 and 2013 mostly used nets that capture microplastics as small as 333 micrometers (one-third of a millimeter) in diameter. We’re all probably smart enough to automatically think A) what about anything smaller than 333 micrometers and B) I have no idea how you would go about finding something smaller than 333 micrometers.

That’s really small, and Brandon wanted a reliable method to look at plastics as small as 10 micrometers in diameter — smaller than the width of a single human hair. Amazon doesn’t sell nets for that.

“I saw these published size ranges and thought, we are under-sampling this smaller range. There’s a big knowledge gap,” Brandon said. So her study used both seawater samples from different depths and areas of the ocean as well as studying the digestive systems of salps, little jelly-like invertebrates that suck in water to filter food and propel themselves through their environment. They used a fluorescent microscope to observe the salps because conveniently, plastics illuminate when exposed to multiple wavelengths of light. She used salps collected in 2009, 2013, 2014, 2015 and 2017, and 100 percent of them still had microplastics in their gut, much of it smaller than the 333-micrometer diameter.

“I definitely thought some of them would be clean because they have a relatively quick gut clearance time,” Brandon said. “(Plastic) keeps breaking down but stays chemically plastic and doesn’t go back into the ecosystem.”

Of course, while we don’t eat salps, Brandon points out they’re not exactly a million steps down the food chain from humans.