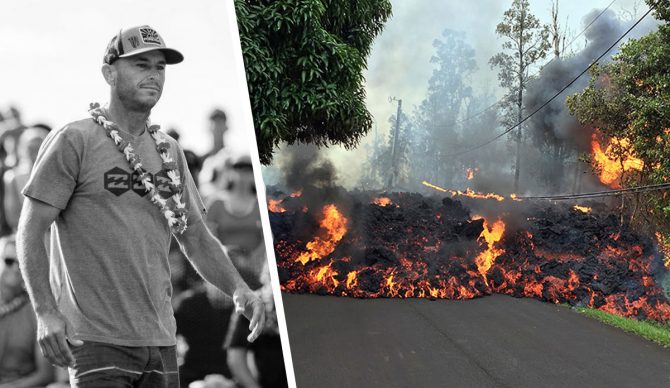 “I have friends directly affected and was talking to a family that had to evacuate,” said Shane Dorian. “They had no clue if their land and home will be there in a few days.” Images: (L) WSL/Sloane (R) USGS via AP, CC BY

One Hawaiian word that permeates the culture is ‘aina. It means land, but in the sense of the land as a living, breathing creation of something greater. The word is spoken with a gratitude for all the land gives us and a deference for all it can take away, how quickly and easily it can wipe the slate clean. Respect for the land is a part of the aloha spirit.

That love and respect has been put to the test in the last month as Mother Nature flexed all the muscle she has on the Hawaiian Islands, first with torrential storms in April followed by terrifying earthquakes in May. The storms devastated the small northern island of Kauai with flooding and landslides, while the earthquakes just off the coast of the Hilo side of Hawai’i caused the island’s volcano, Kilauea, to come to life. The ground ripped open in the middle of a neighborhood, and lava flowed down the street melting cars and gates and anything else in its path, as magma continues to bubble and fly out of newly opened fissures.

These two islands happen to be home to some of the best wave riders of the past three generations, especially big wave chargers like local legends Keala Kennelly and Shane Dorian, who both spoke to me about their recent experiences with the natural disasters impacting their respective home islands of Kauai and Big Island.

With both the flooding on Kauai and the lava flowing into residential areas of the Big Island, part of getting through the natural impacts for Dorian’s family has been teaching the children about the power of nature.

“They are seeing it on the news and the air quality being terrible,” he said. “We definitely talked about the flooding on Kauai and I think the big takeaway is that we have this false feeling that because everything is fine today everything will be fine tomorrow. Hawaii is raw and alive and there are a lot of elements and natural phenomena happening here. It’s a wake-up call for sure.” 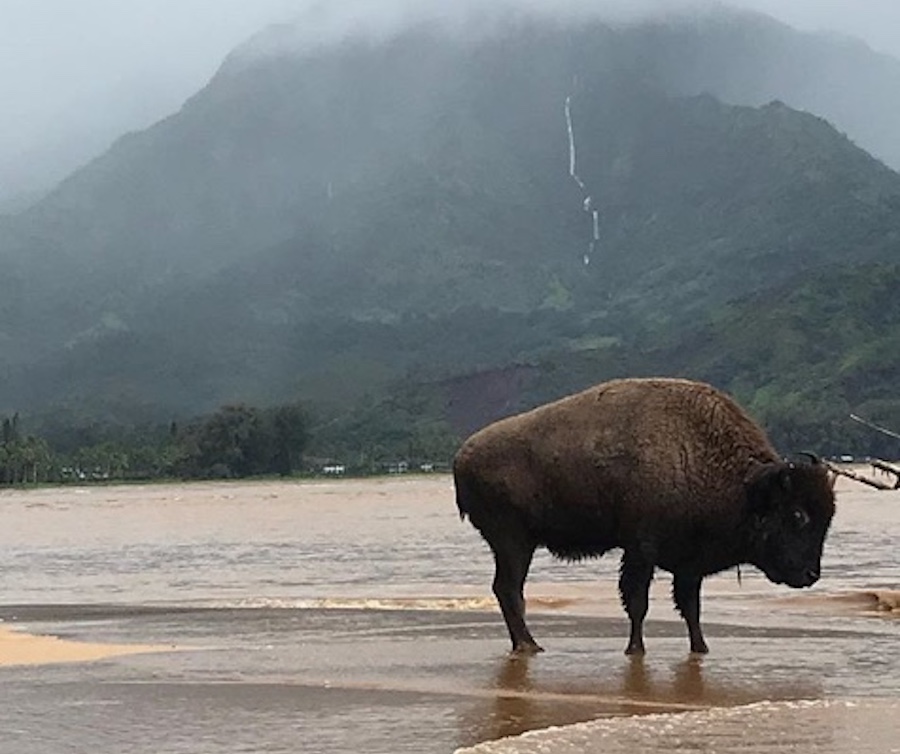 “It’s a wake-up call for sure.” Photo: Instagram/@ianisonline

Kauai’s North Shore, where Kennelly hails from, was particularly devastated by the nonstop rain of the Hundred Year Storm in mid-April because a landslide wiped out the only road that accessed the communities of Wainiha and Haena. Residents were trapped and had to ultimately be rescued by the likes of Laird Hamilton and Kala Alexander, who drove their boats over to ferry people out.

KK’s world was nearly turned upside down by the Kauai floods when a massive landslide unleashed a hillside of dirt, trees, and debris into the ocean less than 100 yards from the home where Kennelly’s parents live. At the time, the Teahupo’o master shared photos of the near miss and expressed endless gratitude that everyone was ok, as well as concern for what could be next. 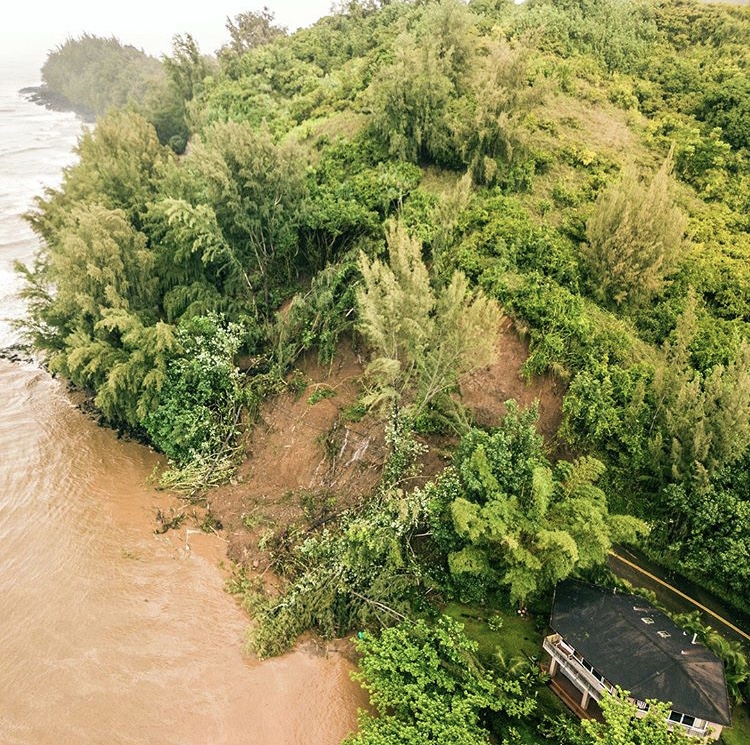 Keala posted this photo on Instagram showing a landslide that nearly took out her family’s home. Photo: Kennelly

“They obviously have some guardian angels watching over them,” Kennelly said of her parents. “I’m just concerned if they stay in their house more of that cliff could come down. Please pray for them and everyone trapped on that side. The only road leading out to Haena literally fell off the cliff into the ocean, and the rain continues.”

At the May 6 Honolulu premiere of the new Andy Irons documentary “Kissed by God,” Kennelly told me that “everyone’s fine, thankfully. But it was a close one.” She let out a heavy exhale and shook her head at the thought of just how close it was.

The Kauai community banded together on multiple fundraising efforts in the face of the catastrophe, including one two-pronged effort called We Love Hanalei which coupled GoFundMe page to directly benefit families with an Instagram auction to directly raise funds for the Waipa Foundation’s relief efforts. Founder Hannah Skvarla said that when she launched the auction three weeks ago she just put the word out to a few family friends with companies that may want to donate items for bidding, and that it snowballed to a point where suddenly Donovan Frankenreiter was getting Chris Martin to donate a signed guitar that sold for $3,500.

All the winning bidders were then instructed to donate the amount of the bid directly to one of Kauai’s local nonprofit groups, Waipa Foundation. Though the auction has closed, donations to help Kauai’s rebuilding can be made through the Waipa Foundation or the We Heart Hanalei GoFundMe page, which has raised over $290,000 in just over three weeks.

While things are looking up for Kauai, the Big Island is in the thick of its unexpected natural disaster, and things could get even worse. Hundreds of tiny earthquakes rocking the east side of the island opened Kilauea’s crater on May 3, sending a plume of ash and vapors shooting into the air before the lava flows began. Fissures —15 counted within the first week of the disaster — started opening up in the ground, with lava gurgling out and flowing into the Puna subdivisions of Leilani Estates and Lanipuna Gardens. Over three dozen structures, including more than two dozen homes, have been destroyed so far as residents evacuate with whatever parts of their lives they can carry.

Shane Dorian was born and raised on the Kona side of the Big Island, which is on the opposite side of the youngest island in the Hawaiian chain from where the volcano is currently erupting. Even though he’s physically removed from lava running in the streets, Dorian has seen the lava flow before in his lifetime and told us how he, his family, and his friends have been exposed to the effects of the activity.

“We are getting a lot of volcanic haze even on Kona side…the air is pretty heavy, definitely the air quality is bad island-wide,” he said. “I have friends directly affected and was talking to a family that had to evacuate. They had no clue if their land and home will be there in a few days. They had to pack a few necessities in the middle of the night and leave right away. They had nowhere to go, they were just hanging at the beach wondering if lava would flow over their whole area.”

Donations — the most requested of which are diapers and baby formula — are being collected and shipped over from neighbor islands this weekend, and residents from all around the Big Island are rallying to help those impacted by the eruptions.

“A lot of friends from the Kona side are headed over to drop off sites and bringing supplies that are needed,” Dorian said. “The Big Island Giving Tree is helping a lot and you can bring donations to them.”

For everyone not currently on the Big Island, Hawaii News Now compiled a list of ways to help the victims of the volcano, many of whom are local people living in the volcanic zones because that’s all they can afford.

“This has happened on the Big Island a lot of times since I was a kid. It’s terrible to see people’s homes and land get destroyed, and in many of those areas you can’t get home insurance,” Dorian said. “There are a lot of local people who who live in a high risk volcanic zone because of the high cost of living in Hawaii. It’s very sad for those people who lost their homes.”

But even in the face of such destruction and loss, there is a deep respect for the ‘aina. People have been referring to the flow as the actions Tutu Pele — Tutu being the Hawaiian word for “Auntie” – a general reference to an older woman you respect and love, and Pele referring to the goddess of fire who is associated with all volcanic activity that created these islands. People are giving way to Tutu Pele and responding with aloha: respect for the land and love for one another in a time of need.

“The fact is we live on a volcanic island and the volcano does what it wants to,” Dorian said. “The recent lava eruptions are heavy but that area of the Big Island has a long history of lava eruptions and flows. Volcanos do what volcanos do. Nature is definitely reminding us who’s in charge.”