Shark Culling: Not The Answer 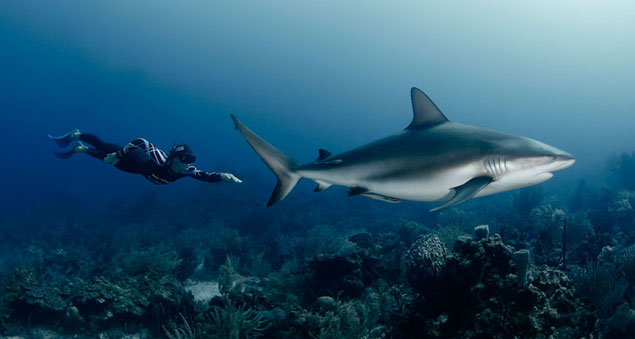 This is the most dangerous animal in the world. They kill millions each year. And beside him, a shark swim peacefully. Photo: Lia Barrett

I cannot begin to explain my disgust at Western Australia’s recent implementation of new laws that allow professional fisherman to destroy sharks that enter a “kill zone” marked out by the new legislation.

It’s hard to find the best words to describe my feelings about the issue. Culling sharks is utterly ridiculous. The government (and any other person that supports shark culling) needs to understand the full extent of the situation before they make harsh decisions; they need to pull their heads out of their arses and stop acting like dick heads, for lack of a few better words.

I shouldn’t need to cover the fact that sharks have been around for millions of years. We learned that in school. Talking about how the ocean is their territory is nothing new. Accepting the facts that humans take a calculated risk when they enter the ocean and that there are other factors to consider other than shark encounters isn’t anything new either. But these are just three simple, well documented facts that even our government can’t comprehend.

Let’s talk about the vital role sharks play in the marine ecosystem. Sharks are apex predators. When the food chain is tampered with at any level, disastrous effects are sure to follow, especially when the top of the food chain is impacted. Sharks keep the populations below them in check. Without this control (assuming no interference from humans on other levels) other species would grow beyond sustainable levels, eventually resulting in suffocating the oceans. From the apex right down to phytoplankton, each level is vital to the ocean’s very existence. And here’s something that you probably already know: we need the ocean to survive.

Newsflash: Shark sightings are on the rise! I don’t know how much more misleading the government and their accomplices in the media could be. I agree that there have been more shark sightings in recent years, but let’s look at the real facts behind this. According to Surf Life Saving WA (thanks for the amazing work you do!) aerial patrols were conducted over 113 days in 2010/2011 over Perth metro waters. In 2011/2012 this increased to 190 days (620 hours) where there were 247 sightings, and in 2012/2013 there were 221 patrol days (751 hours) which reported 285 sightings. Evidently, increased sightings are the direct result of much needed increases in patrol hours. Interestingly, over both years, the average shark sighting came in at roughly 1 shark every 2.5 hours – proving no disproportionate increase in sightings. Given these figures, is it really any wonder shark sightings have increased? Is it really that hard to realize that the more we’re in the air looking for sharks, the more likely we are to see them?

Newsflash: Shark “attacks” are on the rise! First of all, they shouldn’t be referred to as attacks. These are simply encounters. The chances of even seeing a shark are slim, being bitten by one no different. Sharks will gracefully wander through their natural habitat, and sometimes they’ll get a sudden surprise from a human. At this point the shark will either decide to move along without further interaction or he might decide to take an investigative bite. Sharks don’t share the same abilities as us when it comes to observation. They need to bite, which is just an unfortunate truth, given their power and sharp teeth. It’s naive to simply state that shark “attacks” are on the rise. I’m a scuba diver, which means I put myself in many vulnerable situations based on environmental conditions, hunting grounds, ocean depths, etc. I actually go looking for sharks, and I am rarely graced with their presence.  Sure, there may have been more encounters and bites over recent years of which some have unfortunately been fatal, but think about how rapidly our population is growing and consequently how many more people are playing in the ocean – it’s all relative. Then consider the impact of the depleting natural food sources for sharks caused by humans’ over-fishing. What are sharks forced to do? They’re forced to find new feeding grounds – some of them try closer to shore where fish stocks can be plentiful and there’s an enticing array of scents and vibrations caused by frolicking humans attracting them there. So who’s really to blame here?

The government claims sharks kill too many people. I know we can’t put a value on a person’s life, but comparatively, how many are too many? It’s important to note the statistics of the other, more pertinent, risks and causes of death in our society – let’s focus on WA alone. According to Perth Now, shark bites have killed 11 people in WA since 2000, (less than one per year with tens of millions of people entering the ocean many times each every year). According to the Western Australia Police website, as of January 10th, there have been 671 road fatalities since 2010 alone (more than 163 per year, many of which are caused by the poor decisions people make by driving under the influence and/or speeding). Straight away, this highlights an issue in society the government really should be addressing. But does it address it? To what extent? Are their mitigating/controlling methods as severe as culling? Western Australia’s Drug and Alcohol Office puts the number of alcohol related hospitalizations in the North Metro Area of Perth alone at 25,277 from 2005-2009 (more than 5,000 per year), at a cost of more than $146,000,000. Alarmingly, there were 1,485 alcohol related deaths from 1999-2007 (that’s 165 deaths per year!). So people are killing people (or at least themselves) in alcohol related incidents and the government gets all high and mighty deciding to cull sharks that can’t be held accountable for a death because they’re killing “too many people”?

So besides the idiotic views of those that support shark culling and the facts above about how culling simply doesn’t make logical sense and is morally wrong, there is no scientific evidence suggesting that shark culling is effective. History and experimentation actually proves its ineffectiveness. A shark cull conducted in Hawaii between 1959 and 1976 destroyed over 4,500 sharks and had negligible positive effect on reducing shark bites. It only had a detrimental impact on the marine ecosystem. So why is the government spending tax payer money on a  method that has proven to be ineffective? Why aren’t they investing in methods that actually work and further research and education? Instead they use scare tactics, based on false or at least non-transparent “facts.”

I struggle to understand why there is resistance to accepting the proposal from Ocearch Shark Men to tag and research the sharks of WA. Helping us understand more about them really is the key to both sharks and humans living and swimming in harmony. I encourage you to check out the Facebook page to support this research proposal.

Above all this, I’m confused to absolutely no end as to how this newly established kill zone (within 1km of selected beaches) can have baited drum lines on its westernmost perimeter – a cowardly hunting method to say the least. This will attract the curious shark which may then cross the 1km mark. This is when the innocent shark can be killed. The purpose of a baited drum line in an effective strategy would only be to attract the shark (to an area far enough away from people) so it sets off an alarm and can then be monitored, even ushered out to sea. This, of course, wouldn’t be a traditional drum line, it would need to be a modified version which didn’t catch the shark and drown it. If it did start to venture too close to the beach, people could easily be alerted and evacuated. A simple, yet effective solution. Even if a shark bites or kills a person and is then hunted to be destroyed, there is no guarantee the shark that is found is the one responsible for the death. I know that if I were to kill the wrong person (or any animal without the government’s misguided permission) through mistaken identity, I’d be made to stand trial and would expect to spend many years in prison. Shit, I wouldn’t even get away with killing the right person responsible for hurting my own family. Humans are the real threat to this world. The ones that do wrong (very wrong) should face capital punishment. Paedophiles, rapists and terrorists have no place on this earth, yet they’re left to continue doing damage to their own species. Nothing significant is done to fix this issue. There’s no culling of them, there’s not even individual capital punishment.

The government are to blame for this new law. After all, they are the ones that created it. But maybe if more than the 62,000 fans of No Great White cull in WA, nearly 25,000 fans of Support Our Sharks, roughly 12,500 supporters of the change.org petition and the 9,158 supporters of the care2 petition (to name just a few) stood up for what’s right, they could have persuaded the government to act more responsibly and with a shred of integrity.

There is no excuse or justifiable argument that even comes close to validating a shark cull. End of story.