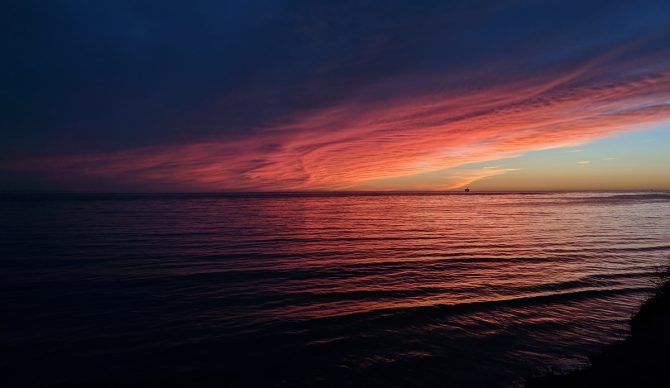 I remember the term “marine heat wave” gaining popularity sometime in 2018. It’s one of those concepts where scientists start using normal person speak in order to make sure whatever they’re studying or discovering sinks into our underused brains. I’m sure they could have come up with a way more science-y name for the phenomenon to use amongst themselves, but they went with marine heat wave, probably because it’s pretty self-explanatory. When the phrase came into my own periphery I more or less took it as their way to let us know that data supported what most of us can recognize in gradual changes of water temps and warmer weather throughout the year.

The data shared last year that went with the rhetoric pointed out that the number of days each year some part of the ocean has a heat wave increased by 54 percent between 1925 and 2016. Those heatwaves are also 34 percent more likely in that same time period and are lasting 17 percent longer than a century ago. All this was found through tracking sea-surface temperature data back to 1900 and satellite data from as far back as 1982.

The term is back in our vocabulary, or at least our news feed this week after a new study was published in Nature Climate Change, comparing the oceans’ heat wave trend to “wildfires that take out huge areas of forest.” This time, researchers detailed the implications of the ocean heat wave trend continuing and outlined just how it’s impacting the world currently. In total, they studied 1,049 ecological observations, recalculated to 182 independent effect sizes from 116 research papers that examined responses of organisms, populations, and communities to marine heat waves, as well as cross-referencing the health of coral, seagrass and kelp in response to marine heat waves.

“You have heatwave-induced wildfires that take out huge areas of forest, but this is happening underwater as well,” said Dan Smale at the Marine Biological Association in Plymouth, UK, whose research was published in Nature Climate Change. “You see the kelp and seagrasses dying in front of you. Within weeks or months, they are just gone, along hundreds of kilometres of coastline.”

The new report is a long one, citing everything from extreme weather events to what researchers call “discreet” weather events and noting the political and economic impacts of marine heat waves for anybody unsatisfied with outlining any dire environmental consequences. There were examples of things like lobster stocks and abalone stocks dwindling in certain areas and impacting local economies.

As heatwaves increase in frequency and intensity, they say we are losing kelp forests, seagrass meadows, and coral reefs, which in turn impact everything else in the ocean as well. The changes are happening to these types of ocean environments along just about any coast, which are used for shelter and providing food for marine life everywhere. This, of course, has an effect on every marine environment but the published report points out that environments with rich biodiversity or species that are already living near their temperature limit are seeing the most drastic changes. Natural cycles like an El Niño are a factor in global warming, but they say the existing baseline temperatures are already higher, with even higher spikes when heat waves do occur.

“The starting temperature is much higher, so the absolute temperatures [in a heatwave] are that much higher and more stressful,” Smale told The Guardian.