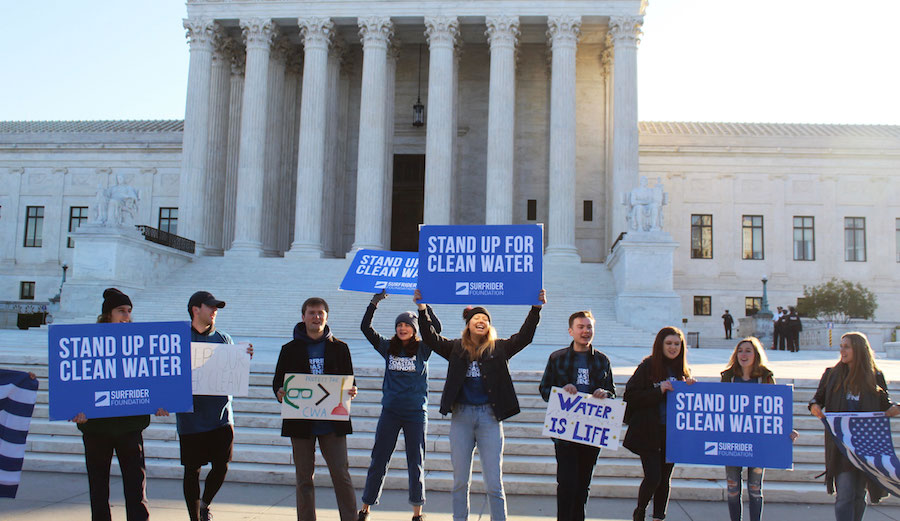 Since 2010, Surfrider has been fighting pollution on Maui – now the case has risen all the way to the highest court in the land. Photo: Surfrider

The future of our oceans, rivers, and lakes currently hangs in the balance in Washington. On Wednesday, justices of the Supreme Court heard arguments on both sides of the County of Maui, Hawaii v. Hawaii Wildlife Fund – an affair being billed as the “Clean Water Act case of the century.”

Central to the case is the question: if polluters dump treated sewage or another effluent into something, in this case, a groundwater source, that naturally makes its way to the ocean or another waterway protected by the Clean Water Act, are the polluters at fault?

For almost a decade now, an issue on the Hawaiian island of Maui has been central to this debate. Daily, Maui County’s Lahaina Wastewater Reclamation Facility discharges millions of gallons of treated sewage into groundwater that ultimately makes its way to the ocean and compromises water quality and the health of local reefs.

Back in 2010, the Surfrider Foundation’s Maui chapter brought the issue to light and began working with Maui County to find an alternative. When nothing was done, in 2012 Surfrider filed suit.

The case has now been appealed all the way to the highest court in the land and Surfrider, the Hawaii Wildlife Fund, Sierra Club-Maui Group, and the West Maui Preservation Association, all of which are represented by Earthjustice, an environmental advocacy law firm, are in the midst of a case that could have far-reaching implications. Not just on Maui, but for all of the nation’s countless waterways.

To get up to speed on everything that went down on Wednesday and better understand the gravity of the case, I spoke to Angela Howe, Surfrider’s Legal Director, a few hours after she emerged from the Supreme Court.

Can you briefly describe the legal issue here as it relates to the Clean Water Act? What are both sides arguing?

The Clean Water Act prohibits discharges of polluted water to waters of the United States. And the Lahaina Wastewater Reclamation Facility is injecting three-to-five million gallons per day of partially treated sewage – but still polluted water – into the groundwater on Maui. We know from tracer die studies that it gets to the Pacific Ocean and ultimately to the reef and harms nearshore resources, kills the reef, and compromises water quality.

The opposition side says that anything that goes through groundwater to a water of the U.S. should not count under the Clean Water Act, and we say it absolutely should.

What’s the significance of this case being appealed all the way to the Supreme Court? Why are some calling it the “Clean Water Act case of the century?”

I definitely think it has the ability to be a huge Clean Water Act precedent. So, it’s a really significant case for environmental law.

One of the amicus briefs or friend of the court briefs that was filed was signed by 37 environmental law professors supporting our interpretation of the Clean Water Act. We also had 64 craft brewers sign on to an amicus brief basically saying they need clean water to brew good beer. So, we had a ton of amicus parties actually on both sides.

On the other side are industrial polluters, oil companies, agricultural companies, pesticide companies – a lot of industries that would benefit from having a loophole in the Clean Water Act.

The stakes are fairly high. It’s not just Maui.

There have been some shakeups on the Supreme Court in recent years. Is that concerning?

Well, I think most people that are trying to figure out how this case will go are basically lining it up with conservative justices against more liberal-leaning justices and obviously the composition of the court has changed in recent years. However, in the arguments today it felt like Justice Roberts and Justice Kavanaugh were asking good questions and a few of the justices seemed to not have their minds made up yet. So, it’s really difficult to predict at this moment.

Can you describe the scene a bit for us?

It was my first time in the U.S. Supreme Court and it’s quite an impressive room. There are big curtains behind the justices and two very large U.S. flags bordering each side of them.

For the actual hearing itself, they give each attorney two minutes to give an opening statement and then they just charge in with very difficult questions. So, they really ask some of the hardest questions to each side right off the bat.

The total time for the arguments is about an hour – each side gets two minutes for an opening statement and about 25 minutes of questions.

And where does it go from here?

They’re actually going to have a conference on Friday with closed-door deliberations. But, the written opinion isn’t expected out until the March to June timeframe.

What can concerned surfers everywhere do to continue to support Surfrider’s efforts?

I think you want to get involved with your local chapter to really understand what’s happening with your local body of water. I mean it was the Maui County chapter that brought this lawsuit. So, they understood the problem, they acted locally to address it and now it’s going to the highest level as an important issue around our nation’s premier environmental law, or at least the interpretation of it. I don’t think they saw it going that far, but everything that happens on the national and even international level really starts locally.