Surfrider Reminds Us That We Live in the United States (and Oceans!) of America 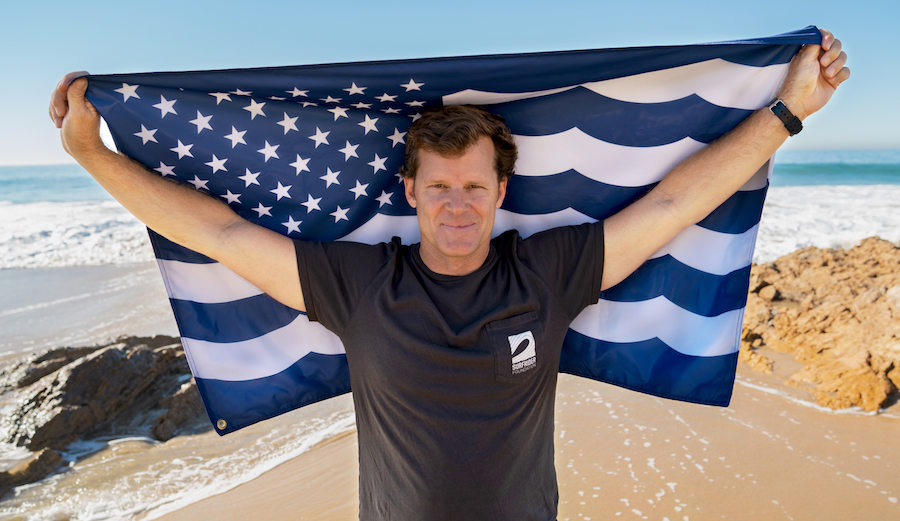 “Land and oceans of the free, and the home and waves of the brave.” Photo: Russ Hennings

There’s a phrase that’s popular in the American lexicon: sea to shining sea. Implicit in that phrase is the United States of America spans from the Pacific Ocean in the west to the Atlantic Ocean in the east and ends abruptly at the sand. But, the Surfrider Foundation doesn’t see it that way. For all those that recreate, fish, or otherwise get enjoyment from the Atlantic, Pacific, and Gulf waters, the area that constitutes the United States also extends well off its shorelines. This land is your land, this land is my land, and so are the oceans, as it were.

“For as large as the United States is in terms of land, what I think people don’t realize is the United States is actually more ocean than land,” said Surfrider CEO Chad Nelsen, referring to ocean rights under the 1982 UN Convention on the Law of the Sea. “That’s why we hope to remind folks that the oceans are as much a part of this country as its mountains and forests, and we have a responsibility to protect them.”

On Thursday, the Surfrider Foundation launched the United States and Oceans of America campaign in an effort to draw awareness to America’s oceans that span nearly 4.5 million square miles. It’s no coincidence that the timing of the initiative is days before millions of Americans will head to the polls for the 2018 midterm elections. With so much at stake, including plastic pollution, offshore oil drilling, rollbacks to federal protections, and sea level rise, one of the key ways any and every American can make a difference, according to Chad Nelsen, is to do their civic duty and head to the polls.

“I think one of the most important things people can do is vote,” he said. “In the 20 years I’ve been involved at Surfrider, the more people are engaged in the decision-making process – whether that’s at the city council level or all the way up to the president of the United States – the better the outcome is.”

The United States and Oceans of America campaign is about reminding Americans that when they head into a voting booth, they represent not just the mountains and the prairies, but also the oceans white with foam. The United States is, according to Surfrider, the “land and oceans of the free, and the home and waves of the brave.”

“When you’re out there surfing and you’ve got a surfboard and a wetsuit on, nobody knows if you’re a Republican or a Democrat,” said Nelsen. “A clean ocean shouldn’t be a partisan issue.”

“Even then, this is bigger than surfing,” said Nelsen. “Obviously, we are the Surfrider Foundation and we come from surfing. But, we want to reach a broad swath of Americans that care about the ocean. And that’s just about everyone.”

When asked what the three major issues facing America’s oceans are, Nelsen put it simply: offshore drilling, plastic pollution, and climate change. All of which voters have a say in – from instituting single-use plastic bag bans to carbon fees (like the one currently on the ballot in Washington) to saying no to opening America’s waters to drilling.

“[This] is a rallying cry to come around the shared values that we have,” said Nelsen. “And what better place to do that than the ocean?”

To learn more and to buy a pretty rad flag, click here.