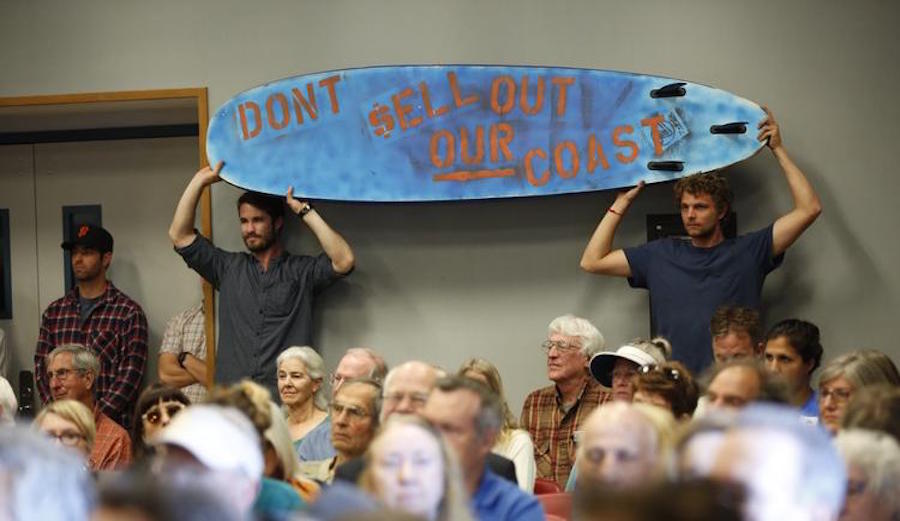 In a public hearing Wednesday held in Morro Bay, California, the California Coastal Commission disclosed that they had voted 7-5 in a private session to fire Charles Lester, who has been serving as the agency’s executive director since 2011. The commission is responsible for regulating development and preservation on California’s majestic coastline, which spans over 1,000 miles between Eureka and San Diego, in line with the state’s Coastal Act. The effort to remove Lester began in December and has been perceived by many as a coup swayed by developer influence.

The commission received over 14,000 letters supporting Lester’s retainment, and newspapers throughout the state ran editorials in support of him. Hundreds of people filled the public hearing hall this morning with printed signs reading “MORE LESTER” and handwritten placards on pieces of cardboard and even a surfboard begging the commission to protect the coast from construction.

A Los Angeles Times reporter on the scene described 100 supporters bursting into tears and angrily reacting as the decision was announced that Lester’s termination would be effective immediately. The ousted director was photographed with his head leaning back, his eyes closed, as the defeat washed over him following a long battle shrouded in rumors of subterfuge. In a marathon of public comment that lasted about as long as an average 9-5 work day, nearly all of the hundreds of people who testified spoke in Lester’s favor, according to the New York Times.

“Considering the outpouring of public support, the commission is tone deaf and out of touch with the will of the people,” Surfrider Foundation coastal preservation manager Stefanie Sekich-Quinn told the Times. “The public trust has been broken, and I believe a fundamental change is needed to restore public confidence in the Coastal Commission.”

The decision comes as the commission faces a vote next month on the development of 1,100 acres at Banning Ranch in Newport Beach, a luxury housing project said to be worth over $1 billion. It’s one of the largest construction projects ever brought before the commission, making many fear that several members were swayed by contractors to unseat Lester, who the commission claimed was slow to approve development projects and whom they accused of a lack of transparency.

One of the commission members who voted in favor of Lester’s dismissal was Wendy Mitchell, who has been a person of interest for environmentalists and community members seeking the source of Lester’s employment review, which started the swell that led to Wednesday’s hearing and what many have called a “coup.” In the San Diego Reader’s efforts to find the source of the employment review, a screen shot of a Facebook post from Mitchell in December showed the commission member posted with U2 guitarist The Edge and his wife alongside a status from Mitchell saying, “They are very nice people, I’m only sorry it took them 10 years to get approval on their home.”

Mitchell has since removed the post, which was in reference to the commission’s approval last year of the musician’s five-home compound atop of a pristine bluff in Malibu. The commission’s executive director before Lester, environmental activist and lawyer Peter Douglas, had called the initial proposal for the project compound “one of the three worst projects I’ve ever seen in terms of environmental devastation.”

Commission Vice Chair Dayna Bochco refuted claims of of impropriety at the hearing Wednesday, saying the members “have been terribly mischaracterized as developer hacks.” Though Bochco was among the votes to keep Lester, she suggested a lack of leadership and communication with staff as the source for the employment review, according to the Los Angeles Times report on the hearing. These views were not shared by all the commission members, including San Mateo County Supervisor Carol Groom.

“He leads by accomplishment,” Groom was quoted in the Times. “Month after month after month we have some 60 issues to deal with. To do this work there is leadership at the top and the bottom… The proposal to replace our executive director is absolutely wrong.”