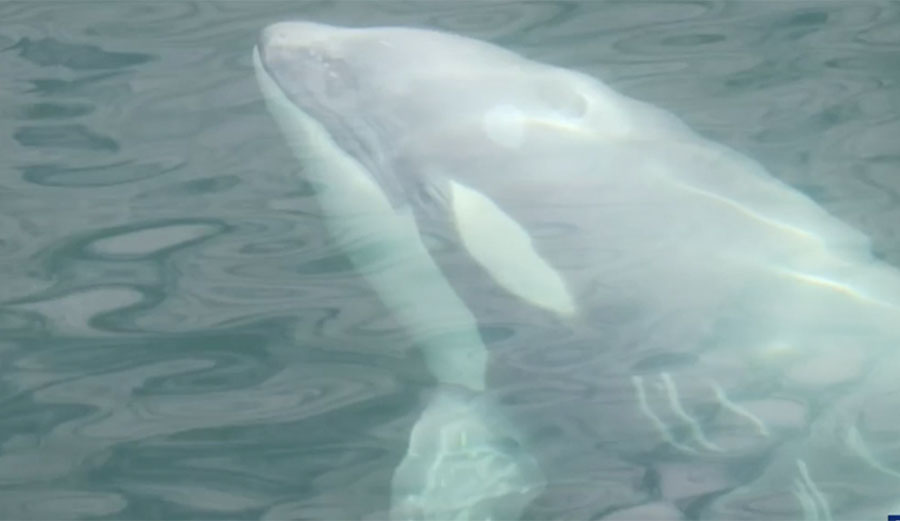 In the Salish Indigenous language, “Tl’uk” is the word for the moon. The moon, of course, is white—save for those rare harvest moons—so when researchers spotted a juvenile orca back in November of 2018, they thought it was a fitting name. Fitting because the little orca is a strange pale, dusty color. And recently, this rare whale was spotted off the coast of Washington State. He’s not an albino, and scientists don’t know for sure why his markings are the way they are.

“The thing that everyone is talking about with Tl’uk is his color,” Erin Gleff, a naturalist with Seattle-based Island Adventures Whale Watching, told IFLScience in an interview. “He’s obviously white, he doesn’t look like other orcas.”

They have an idea, though. Tl’uk’s unique markings may be due to something called leucism, where an animal loses some of its pigmentation.

He’s not the first white orca ever, but they generally don’t survive for as long as Tl’uk has. Not only is he surviving longer, he seems to be thriving. “You could call him a bruiser,” Gleff continued.

Tl’uk’s pod calls the waters from Washington State northward to Southeast Alaska home, which is the same region as the Southern Resident Killer Whales. That family has been in the news lately, as their numbers are dwindling. Last year, in a heartbreaking story, one of the whales held her dead calf in her mouth for almost three weeks. Despite the declining salmon stocks that are affecting the Southern Resident whales, Tl’uk’s pod appears to be doing just fine. His pod doesn’t rely on salmon to survive, instead living mainly off sea lions and seals.