There’s a Tsunami of Trash on the U.S.-Mexico Coastal Border 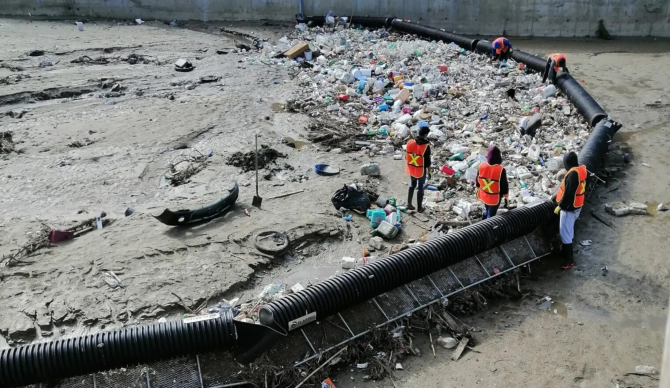 The Tijuana Estuary just north of the U.S.-Mexico border is a Ramsar Wetland of International Importance and a NOAA National Estuarine Research Reserve. This coastal and marine ecosystem provides critical habitat for more than 300 species of birds, leopard sharks, bottlenose dolphins, gray whales, and California spiny lobster. It is an important recreational, coastal, and economic resource for communities on both sides of the U.S.-Mexico border.

Unfortunately, this coastal habitat and the health of border communities are under threat from toxic runoff, like Baja California’s sewage, plastic debris, and California-generated waste tires. Tijuana’s unregulated urban sprawl and limited trash collection, especially in the city’s steep canyons, have produced a tsunami of trash and sediment that drains into the Tijuana River basin, impacting San Diego before eventually making its way into the Pacific Ocean. Plastics, waste tires, and large debris blanket coastal ecosystems and impact more than six local, state, and federally protected areas. They clog sewage collection systems, exacerbate flooding, and are vectors for mosquito-borne diseases, including yellow fever and dengue.

In order to stop the debris from spilling into the ocean, WILDCOAST, thanks to support from the Benioff Ocean Initiative at UC Santa Barbara and NOAA, installed the first ever solid waste retention system (trash boom) in Mexico, located in Los Laureles Canyon, a tributary stream of the Tijuana River in Tijuana in January of last year.

The trash boom has already prevented 33,000 kilograms (72,752.547 pounds) of solid waste from entering the Tijuana Estuary and the ocean…and counting. WILDCOAST has employed local residents to sort the waste to be reused and recycled, preventing most of it from reaching the landfill. The organization also collects data on the sorted trash and keeps records of the brands to use in future conservation strategies. Approximately 93 percent of the waste captured is plastic and tires.

In order to showcase the possibilities of repurposing waste for community enhancement, waste tires collected in the trash boom were used to build a park for the underserved of Los Laureles. After the inauguration of the park, the community excitedly formed a committee, called “Las Guardianas del Parque” (The Guardians of the Park) to care for it. The media covered the event extensively and kids started enjoying the new playground equipment immediately. 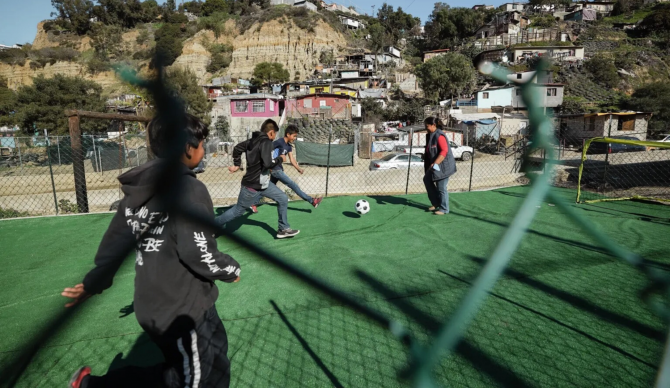 “We never asked WILDCOAST for anything and they have given us so much,” said Señora Rosario, a community leader, who was visibly emotional during the inauguration.

WILDCOAST has also organized community networks to help collect plastic in the canyon’s neighborhoods in an effort to reduce the amount of waste that reaches the trash boom when it rains.

“Residents are compensated for each kilogram of plastic they bring to recycle, creating income opportunities for families in the impoverished area of Los Laureles,” says Rosario Norzagaray, WILDCOAST border manager. The initiative actually addresses a need in the area, where recycling in this northern part of Mexico is a challenge. “We are finding that there are no recyclers, they are all collecting plastic, and then they send it to central Mexico to recycle,” Norzagaray points out. “We are looking for local solutions.”

The organization has ongoing outreach and communication campaigns like this in order to keep local communities engaged. The #bajalealplastico campaign, for example, promotes reducing single-use plastic consumption and recycling efforts. And there are plans to install two new trash booms in the communities of Camino Verde and Matadero Canyon. Both tributaries also feed into the Tijuana River Valley and onward to the Pacific Ocean, contributing to the same problems being addressed in Los Laureles. These future trash booms will help reduce an additional 35 percent of Tijuana’s plastics from reaching the Pacific Ocean.

“This is a great project with a big impact on reducing pollution on our binational coast,” said Yehuda Ben-Hamo of WILDCOAST. “I’m stoked that we expand it into other canyons to help the coast and ocean, as well as assist the residents of some of Tijuana’s most underserved communities.”

Editor’s Note: Learn more about WILDCOAST and their plans to expand into other tropical regions.