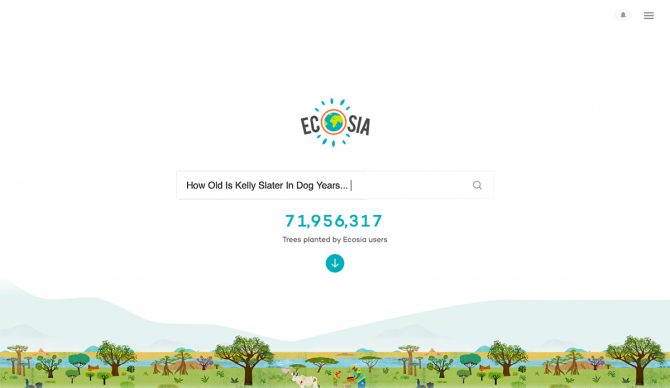 Ecosia is a search engine based in Berlin that donates 80 percent or more of its profits to nonprofit organizations focused on reforestation. Image: Screengrab

“Just google it.” Ironically, even if you’re using Yahoo! or you think it’s 1999 and you’re asking Jeeves, the act of searching for an answer to literally anything, anything at all on the web is defined by the most ubiquitous search engine on the planet. It’s both a noun and a verb. It’s a reflex we execute on our phones and computers at least…I actually don’t know how often the average person Googles something but I know where to find the answer…

Meanwhile, throughout nearly half the existence of the world’s most popular search engine, a lesser-known platform named Ecosia has been using the daily habit/crutch as an act of environmentalism, reportedly putting 80 percent of its profits toward planting trees. Their model is pretty straightforward from an outside internet user’s perspective: every search conducted through Ecosia removes 1kg of CO2 from the atmosphere by planting trees. The simple math comes out to every individual having the potential to remove three to four kg of CO2 from the atmosphere a day by adding Ecosia to Google’s Chrome. To date, according to the counter on the search engine’s main page, they’ve managed to plant just under 72 million trees with their 8,000,000+ users. Search for your next assym, single-concave, diamond-tail, keel-fin, sustainably-sourced bamboo Mini Simmons, you’ve planted a tree (Dear, God, I hope that board doesn’t actually exist…). Search “Best Point Break Quotes,” you’ve planted a tree. You get the picture.

Between its December 2009 launch and March of 2013, the organization reportedly donated €1,239,953.67 to the World Wildlife Fund. In 2013, they moved donating efforts to The Nature Conservancy’s Plant a Billion Trees program, donating another €758,063.94 in a little more than a year. And in 2015, their donations started spreading to various associations that helped them carry out the same cause, amounting to another €15,038,620 in verified donations. In total, they’ve made more than €17 million (almost $19 million USD) in under 10 years. On top of this, the organization says their servers run on clean power, all provided by a solar plant. But by comparison, that’s nothing new, as Google’s search engines have been running on 100 percent renewable energy since 2017, reportedly.

“We recently built our own solar plant, so that we can run our servers on clean power,” the Ecosia brand writes. “This is even better than buying renewable energy from existing plants, as the plant can deliver clean energy to the grid and replace electricity derived from fossil fuels.”

“By planting trees and offsetting its energy use with renewables, each search with Ecosia actually removes 1 kg of CO2 from the air, which makes Ecosia a carbon-negative search engine. Here’s the math: an average search generates around 0.005 € of revenue. It costs roughly 0.25 € to plant a tree, which means that Ecosia can plant one tree every 50 searches. On average, these trees will each remove 50 kg of CO2 during an expected 15-year lifetime.”

Naturally, I Googled as much information as possible to learn all this.

You can learn about adding Ecosia to Chrome as your default browser here.