This Is What Happens When a Hippie Goes Hunting 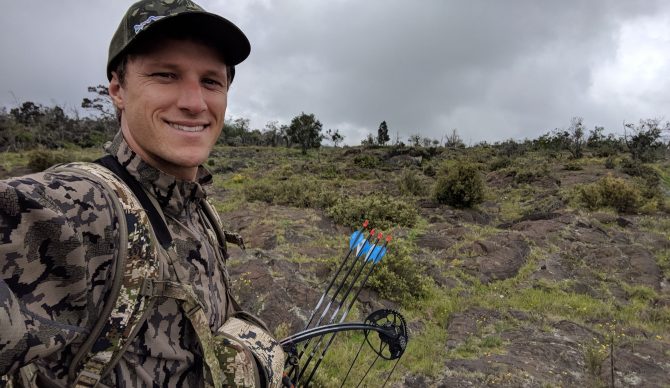 I slowly crept through a large pasture overlooking the Pacific Ocean on the Big Island of Hawaii. I followed two of the state’s best bow hunters, Justin Lee and Wayne Cypriano, who instructed me to walk in their exact footsteps to make less noise with each stride. As the sun began to set, a number of wild pigs appeared up the hill in the distance. We took a long U-shaped route into a ravine, through a creek, and approached the animals downwind. The hunters knew when to move quickly, when to be still, and when to tell me to knock an arrow. To me, all of these decisions seemed to be made at random, but as a visiting haole and novice hunter, I at least had the wherewithal to shut the fuck up and do what I was told.

I’ve been bow hunting for two years now and have hunted four pigs and a ram. As someone who is frequently introduced as their environmentalist friend, it might be confusing when I proclaim that Meat Eater is my favorite show on Netflix. It’s not hard to make the case that hunters are environmentalists. I could give you the statistics on how hunters fund more conservation than any other enthusiast group on earth and how wild pigs (A.K.A. rototillers with hooves) do a number on native ecosystems, but, that’s boring. I want to explore something much more exciting: a concept called cognitive dissonance. (Bear with me).

Cognitive dissonance is the state of simultaneously holding two or more contradictory beliefs, ideas, or values. If you eat meat, but don’t think you could look your cheeseburger in the eye and end its life, then congratulations, that’s cognitive dissonance.

The meat and dairy industry’s worst nightmare is the day you wake up and connect those dots for real. That’s why they’ve implemented laws that make it highly illegal to film inside their facilities. I am convinced that if everyone took a tour through a slaughterhouse, meat consumption would immediately plummet by 70%. One reason why I respect hunters is that they are forced to reconcile a certain amount of dissonance in an extremely visceral way. I feel comfortable saying that the act of hunting a wild animal is more ethical than passively contributing to the suffering of literally billions of cows, pigs, and chickens each year. (Fish too. But they don’t have eyebrows, so fuck them).

As we got within 25 yards of the sow (a female pig), I knocked an arrow, drew back, and as the animal turned broadside, I exhaled and let the arrow fly. My shot was a little high, but the sow fell to the ground and died quickly. When I shoot an animal I go on autopilot. I’m good at not overthinking it. As a result, all five animals I’ve shot have been clean kills. It’s only in the minutes following the act l that a rush of guilt and sorrow begins to churn through my mind.

On one particularly big day in Puerto Escondido, I sat in the water for three hours and didn’t so much as paddle for a wave. Then in a matter of ten minutes, I caught three of the best waves of my life. Bow hunting is a lot like surfing Puerto; there are long periods of waiting in boredom mixed with brief moments of intense adrenaline.

“Big boar over there,” Wayne whispered to me as I stood over the dead sow feeling the guilt begin to churn. 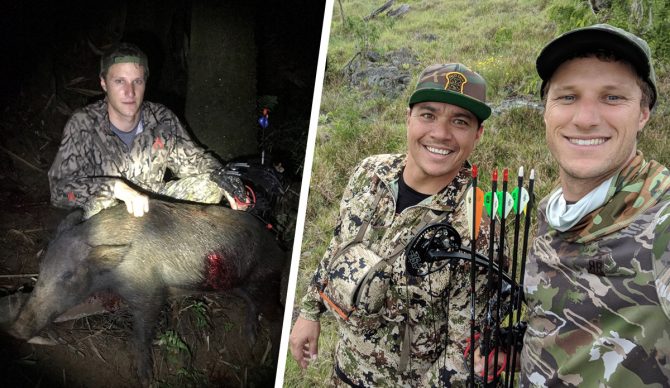 “If you eat meat, but don’t think you could look your cheeseburger in the eye and end its life, then congratulations, that’s cognitive dissonance.” Photo: Thiermann

Ninety yards away, a large boar was rooting for grubs unaware of our presence. At this moment, I should have thrown in the towel. I should have said, “I got my pig. Let’s go home.”

But, in the adrenaline-filled moment, I followed him. We approached the boar downwind and got within 30 yards of the animal. I knocked an arrow, drew back, held my breath, and released the arrow. I shot the boar in the hind leg. It screamed and took off running.

“Fuck,” I said under my breath. Wayne immediately sprinted after the boar, but the animal was halfway out of the pasture and into an adjacent ravine off of the property. By this point, it was almost completely dark.

“We’ll never get him.” Wayne said as he walked back to me breathing heavily. Under the night sky, I dragged the sow back to the truck. I felt like I was sinking, but I also felt embarrassed to even let it show. The boar that I had shot in the ass would die slowly and none of the meat would be harvested. On the drive home I had to roll down the window so I didn’t vomit.

A knot was still buried in my stomach the next morning when I sat down for breakfast by myself at a local restaurant in Honoka’a. As I looked over the menu I noticed a young tourist couple stand up and leave the restaurant. The woman had ordered bacon and eggs but had barely touched her food. I watched as the waitress cleared their plates and thoughtlessly threw the uneaten bacon into the trash. I ordered a veggie omelet.

Listen to Kyle Thiermann’s podcast where he discusses this hunt in further detail here.