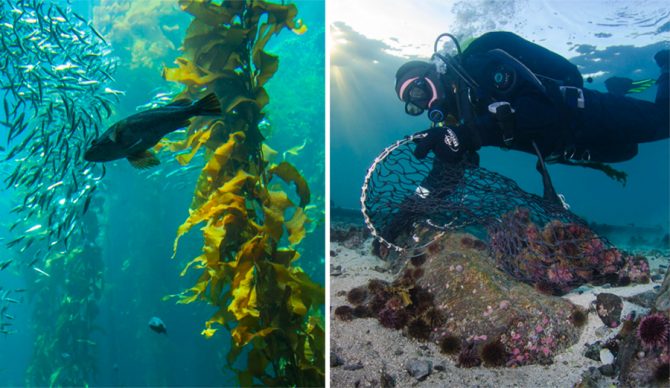 Restoring one will certainly help the other. Photos courtesy of Urchinomics

Editor’s Note: This feature is presented by Kindhumans.

Open any given sea urchin from the droves of them along California’s coastline these days and you’ll find almost nothing at all. What’s usually inside is their “roe” — the star-shaped pattern of five “tongues” or strips of rich, delectable custard-like protein — really gonads or corals, and in fact the sex organs that produce the roe, are scant to be found.

That’s because some 95 percent of California’s kelp forests have disappeared within the last seven years, The New York Times reports, and in their place lies a vast carpet of what are being dubbed “urchin barrens”: fields of virtually empty sea urchins existing in a zombie-like state of suspended starvation, in which they can remain for decades while plucking whatever kelp spores do drift past.

At this rate, the urchins are barely able to subsist, and of California’s two predominant urchin species, the faster, more aggressive, and once-presumed inedible purple urchin has overtaken the slower, plumper, and more commercially sought red urchins. It’s a perfect storm that leaves the seafloor lined with the ever-hungry, predominantly kelp-feeding critters that prevent the kelp spores from taking root, therein keeping the forests from regenerating. But a new innovative business model dubbed Urchinomics, where urchins are responsibly farmed, could bring balance back to California’s ocean floors and help restore valuable kelp forests. 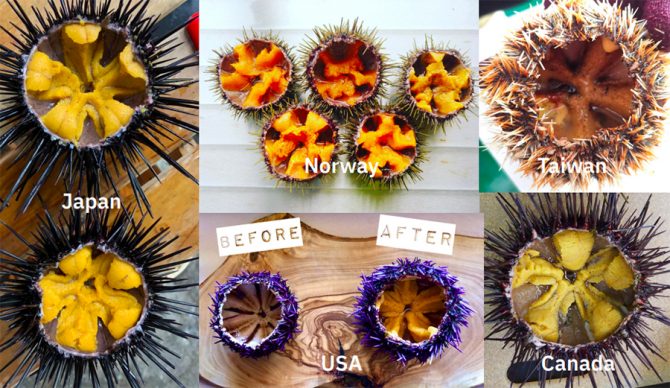 A look at healthy urchins after a little help. Photos courtesy of Urchinomics

How It All Started

It’s a classic story of food-chain disruption: any number of variables change — often largely wrought by humans — a top predator is subject to an epidemic, its prey graze unchecked until they reach critical mass, and soon enough they decimate what was once lush pasture, leaving behind something akin to a sterile wasteland, or dead zone.

The collapse of California’s red sea urchin population began between 2014 and 2015, when the West Coast of the United States saw a heat wave with an average temperature between 3.6 and 7.2 degrees Fahrenheit (2-4 Celsius) above normal, followed by further warming due to a strong El Niño. As a result, sunflower sea stars, sea urchins’ primary predator in those waters, were decimated by a sea star wasting syndrome.

The favored red urchins and the almost roe-less purple urchins in those waters quickly gorged themselves on kelp stalks, and soon enough, there was hardly any kelp left.

While the urchins can endure starvation by going into a relatively inactive state similar to hibernation, they’re neither healthy nor nutritious, and the once-luscious, protein-rich, yellow-orange sleeves of roe inside red urchins, which pull top dollar at fine restaurants the world over, are nowhere to be found.

Urchins are echinoderms, a curious phylum of mostly spiky-skinned critters that also includes sea stars and sea cucumbers. Take a look under the surface of any marine dead zone and you’ll find an undersea-scape sprawling with one type or another, but very commonly, urchins. The last to survive almost any given fallout, they’re commonly referred to as the cockroaches of the sea, and an indicator species of bad tidings to boot.

Now what? A startup corporation along with a multitude of nonprofit organizations and the fishers that depend on the roe-laden contents of the red urchins may have a solution. 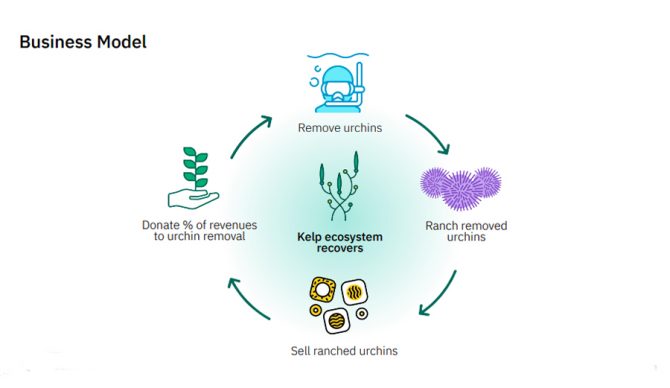 A holistic view of how the whole system should work.

Taking malnourished urchins and plumping them up in captivity is nothing new, and has been happening for at least 40 years, if not much, much longer, says Brian Tsuyoshi Takeda, the Norway-based founder and CEO of Urchinomics, Inc., a company that is working to scale up the process globally.

Tsuyoshi Takeda and Urchinomics found that while nonprofit groups like the Bay Foundation were already finding success saving kelp by removing the overpopulated urchins from dead zones, they’re either crushing them at sea or using them as fertilizer or paving material, and seaside communities are losing out on almost unfathomably valuable socioeconomic potential.

That’s partly because farmed urchin hasn’t always tasted so great. Urchinomics found that by feeding urchins the same umami-rich kombu kelp that’s so coveted by humans, they could achieve a consistently delectable and unprecedented result (even for wild urchins) with 19 out of every 20 urchins fetching top dollar at some of Japan’s finest sushi restaurants. And the process has proven scalable: what started in Norway is now working with urchins in Japan, New Zealand, Canada, and California, where they’ve even managed to turn purple urchins, once thought to be commercially unviable, into a delicacy every bit as valuable as their red-hued cousins.

Now, Urchinomics, those nonprofits, and the economically displaced urchin divers are working together. Urchinomics donates into the coffers of nonprofits and directly pays divers for both red and purple urchins (in the case of California), and restoring California’s bull kelp forests (erosion barriers and carbon sinks that are up to 50 times as effective as boreal forests).

While Tsuyoshi Takeda has proven that the model works and when starved and overpopulated urchins are removed from an area, the kelp spores take root and the forest regenerates, some divers feel left in the lurch.

Gary Trumper, a commercial urchin diver in Albion, California, told The New York Times that he’s earning “just enough to keep the lights on” by hauling a couple of industrial-sized trash cans worth of purple urchins from a designated section of seafloor that’s no larger than an Olympic-sized swimming pool. 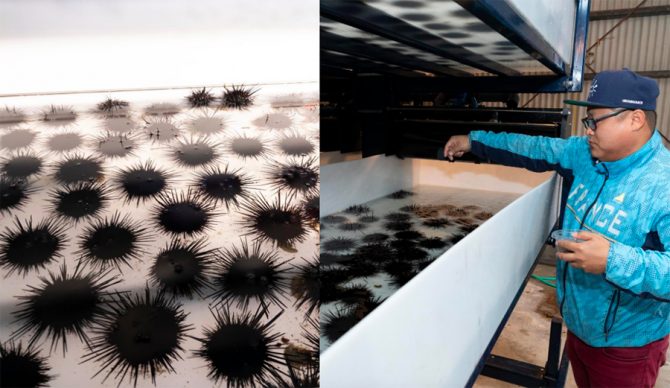 The idea, though, is regenerative, or restorative farming and the hope is that once the kelp, and subsequently the urchins, have rebounded, the divers will be able to return to harvesting for themselves while remaining stewards of their waters.

Is paying fishermen to retrieve these zombie urchins at bottom dollar enough to bring back the kelp and red urchins, though?

Katie Day, an Environmental Science and Policy Manager at The Surfrider Foundation, says kelp and urchin recovery will probably “require a multi-pronged approach including global efforts to curb greenhouse gas emissions to prevent future marine heat waves,” but “collaborative and sustainable methods to create a market for purple sea urchin to assist with kelp restoration is an innovative approach.”

Chances are that such a successful aquaculture model — one that requires only basic facilities, no hormones, no antibiotics, no genetic modification, and counts top sushi chefs among clients — is here to stay. Kelp and bivalve farms, which seem to be springing up left and right, have already laid the groundwork for how restorative ocean farming can succeed without wreaking havoc.

But, we asked Tsuyoshi Takeda, what if wild stocks rebound and farming proves to be more expensive in the long run? “If we ever get to a point where we’ve run ourselves out of business, hallelujah!” Onto the next problem.

To support SeaTrees and their Kelp Restoration project, you can snag a sea urchin tee shirt from Kindhumans or watch their founders speak live at The Inertia’s 4th Annual EVOLVE Summit on December 10th in Los Angeles. Limited tickets available here.