USD Students Made a Solar-Powered, Xbox-Controlled Robot That Cleans Up Ocean Debris

Millennials take a lot of heat from the generations before us. Granted, it’s a rite of passage every generation has to endure from their elders but if the narratives are to be believed, Generation X and the Baby Boomers are absolutely mortified by the prospect of handing the future of our planet off to Millennials. That’s what makes the vision of our oceans being cleaned by some college kid loaded up on Mountain Dew Code Red and Flaming Hot Cheetos while holding an Xbox controller so fabulously ironic.

Maybe I’m embellishing, maybe I’m not. Somebody cleaning ocean debris with an Xbox controller in one hand is actually a very real possibility though. The Cheetos and Code Red would just be accessories…because those things go well with Xbox anyway.

Nonetheless, a handful of engineering students in San Diego just designed a solar-powered autonomous machine called FRED (Floating Robot to Eliminate Debris) and sure enough, he’s (it’s) operated using an Xbox controller, of all things. Students tested their first mini-prototype by having FRED clean up ping pong balls in nearby Mission Bay, and the bigger vision would be scaled up large enough to be sent out to sea like Boyan Slat’s Ocean Cleanup. 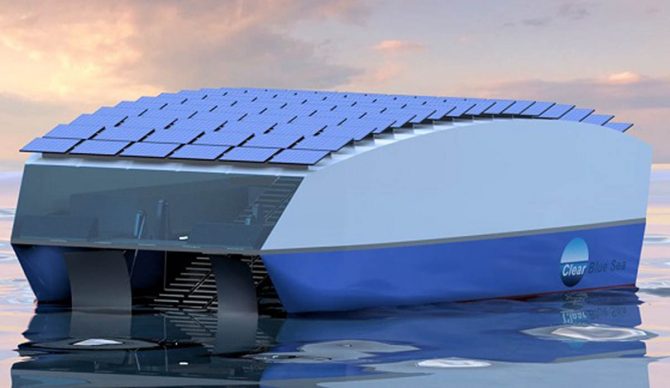 A rendering of what a full-size FRED will look like. Photo: Clear Blue Sea

The students currently have four prototypes built through a summer internship program with local the non-profit Clear Blue Sea. FRED is currently in prototype phase-II, according to Clear Blue Sea’s website, and once this class wraps up their internship the project will be picked up by the next wave of engineering students to enter their program.