What Do You Learn Swimming With Sharks and Ocean Ramsey’s One Ocean Diving? 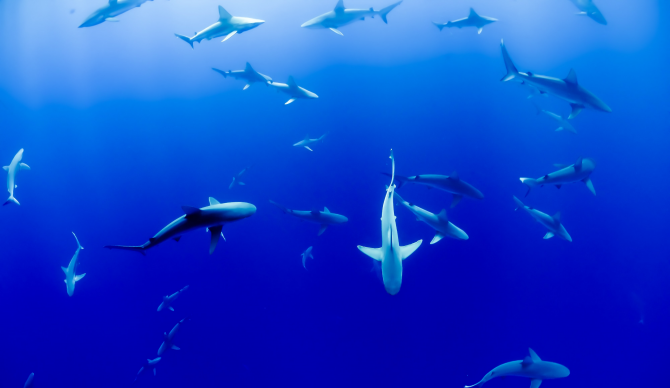 I’ve always tried to avoid surf spots that look “sharky,” so what was I thinking paying good money to dive from a boat into an ocean full of sharks?

“If you’re really lucky you might see a great white,” my guide told me.

I surf daily, grew up with a passion for junior lifeguards and trips out to California’s Channel Islands. So I consider myself an ocean person. But I felt strange the night before my dive — nervous about an ocean experience geared for tourists. I felt a bit better once I was standing in line for the boat and saw a lot of people with me, though. Then a lady came out and said, “All of those diving with a shark cage stand here.  And those diving without a cage stand here.”  We scattered into our respective groups, and I got into the “without-a-cage” line.

Our guide briefed us about the dive once we were on the boat and riding out to our site. “Don’t dangle your fingers when you swim. Make sure to always face the shark. Do not be the prey being chased. Stay above the shark. If a shark is agitated, you will know as they will arch their back and gape their jaws.”

I asked marine biologist and photographer Blake Thompson why we were instructed to swim above the sharks once we got in the water. Don’t sharks swim up and attack from below, I wondered?

“Sharks can definitely approach from below,” he told me. But “the social hierarchy is based on relation to the point of interest,” which, in our case, happened to be the boat. Meanwhile, in the Bahamas, for example, the point of interest could be the bait crate at the bottom of the ocean. So this general rule was not absolute, it turned out. It’s actually context-dependent, which sheds a lot of light on sharks as social creatures, not just angry, hungry predators.

It ended up being a really wonderful experience once we were in the water. The sharks seemed uninterested in us and that calmed me. Then, toward the end of the dive, a Galapagos shark seemed to charge toward me before turning at the last second. That woke me up.  But “the sharks are not out to get us,” our dive instructor reminded me. And that logic adds up. According to American Oceans Organization, an estimated 100 million sharks are killed by humans each year while just six to eight people are killed by sharks in the same time span.

There are more than 500 species of sharks in the world’s oceans and 40 species of sharks in the Hawaiian Islands alone. We saw Galapagos and sandbar sharks on our dive. The sandbar sharks were around six to eight feet long with body color ranging from a bluish to a brownish-grey and a white or pale underside. Meanwhile, tiger sharks prey on sandbar sharks, but we didn’t see any on this particular dive. Galapagos sharks are slightly larger, commonly reaching about nine to 10 feet in length. They prey on bony fish, other sharks, marine iguanas, sea lions, and sadly, they even eat garbage.

In the end, I learned a lot and found out why we need to protect sharks and why we need them for a thriving ocean. The whole experience was worth it and helped me better understand this predator’s wild environment.

Editor’s Note: Learn more from Ocean Ramsey herself in Ocean Ramsey’s Guide to Sharks and Shark Safety at Inspire Courses. You can save 35 percent off any class with Inspire Courses right now by using code ‘SUMMER35’ at checkout.